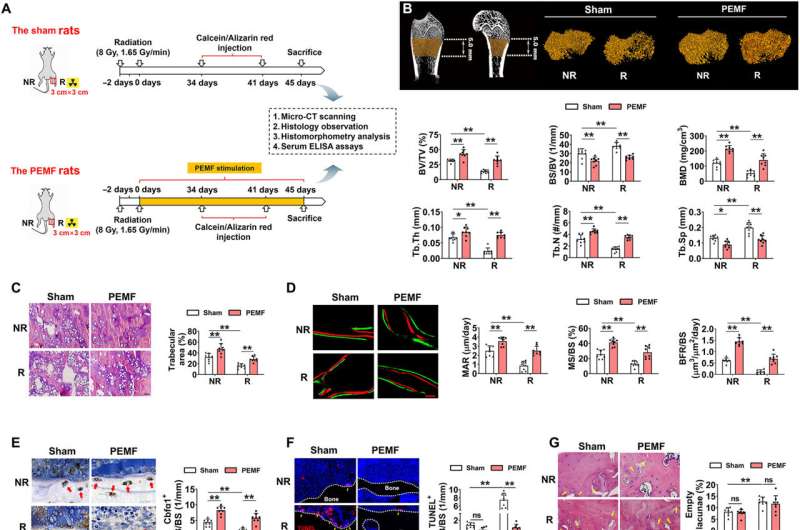 A team of researchers at Fourth Military Medical University, in China, working with a colleague from Shaanxi University of Chinese Medicine, has found that the application of a pulsed electromagnetic field (PEMF) following radiotherapy reduced bone loss in test mice. In their paper published in the journal Science Advances, the group describes their exhaustive testing of various EMF stimulation techniques to find the one that might work best in reducing damage due to radiotherapy, and what they found by doing so.

Prior research has shown that applying radiotherapy to cancerous tumors results in death of the cells that make up the tumor and eventually death of the tumor itself. Its use has prolonged survival times and cure rates for multiple types of cancer. But the use of radiotherapy has a major drawback—when it strikes bone, it results in loss of bone mass so that bones become more fragile and patients develop a high risk for bone fracture. Over the past several years, some research has suggested that firing an electromagnetic field at damaged bone can encourage bone cell growth and partial restoration of bone health after radiotherapy. But because it is still a relatively new area of study, it is still not clear which EMF application works best and in what doses.

The work by the researchers involved firing different types of EMF stimulation at bone cells and then testing calcium ion signaling as a way to measure bone response to the stimuli. In so doing, they found that PEMF worked the best of all those tested. They also found that a field intensity of 2 mT at a frequency of 15Hz elicited the best calcium ion signaling, suggesting it might be the optimum approach for treating damaged bone.

To confirm this, the researchers conducted radiotherapy on the hindlimbs of multiple test rats and then followed that up with PEMF treatment every day for 45 days. They then compared the treated rat hindlimbs with a control group and found that the PEMF stimulation led to greatly improved bone health in all of the treated test rats. In most cases, they found that the bone was as healthy as those in rats that had not received radiotherapy.