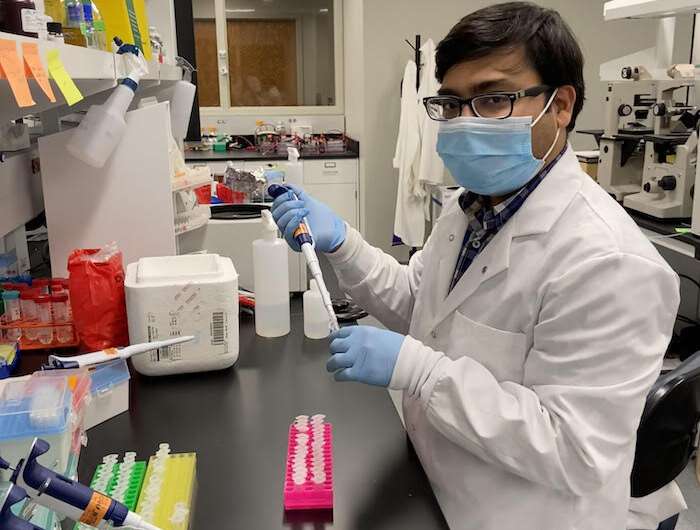 Much like coronavirus, circulating HIV-1 viruses mutate into diverse variants that pose challenges for scientists developing vaccines to protect people from HIV/AIDS.

“AIDS vaccine development has been a decades-long challenge partly because our immune systems have difficulty recognizing all the diverse variants of the rapidly mutating HIV virus, which is the cause of AIDS,” said Brandon DeKosky, assistant professor of pharmaceutical chemistry and chemical & petroleum engineering at the University of Kansas.

In the past five years, tremendous progress has been made in identifying better vaccine methods to protect against many different HIV-1 variants. One important step was when scientists at the National Institute of Allergy and Infectious Disease’s Vaccine Research Center discovered a promising antibody called vFP16.02. Antibodies are proteins the immune system deploys to target and destroy pathogens and viruses—and scientists at the NIH determined that the vFP16.02 stimulated by a vaccine had potential to effectively fight HIV-1.

To further understand the promise of vFP16.02-like immune responses as the basis for an eventual vaccine against HIV-1, the team at the NIH/NIAID Vaccine Research Center partnered with the Immune Engineering Laboratory at the KU School of Pharmacy, where scientists in DeKosky’s lab set about understanding how the same antibody-based approaches could be even more powerful in the fight against diverse HIV antigens.

Their encouraging findings were just published in the peer-reviewed journal Proceedings of the National Academy of Sciences (PNAS), showing several important mechanistic features about immune protection, including the binding strength of the antibody directly correlated to its ability to neutralize HIV-1.

“We wanted to see whether we could further increase the potency and neutralization breadth of this antibody,” Madan said. “That means you could give a lower amount of antibody to someone as a prophylaxis, and it’s going to produce a much better and broader immune response. There are various clades of HIV viruses —now I think you must be hearing about various versions of SARS-CoV-2 like the U.K. variant and the South African variant—likewise, HIV also is quite diverse.”

Madan and colleagues used high-throughput screening platforms based on modified yeast cells to display antibody variant proteins, and advanced cell sorting and next-generation DNA sequencing explore a vast library of possible alterations (also known as mutations) to the vFP16.02 antibody. They analyzed the antibodies’ response against 208 different HIV strains and “determined the genetic, structural and functional features associated with antibody improvement or fitness.”

“In this study, Bharat and colleagues made artificial pathways of anti-HIV-1 immune responses to identify what does and does not work for achieving better protection against HIV-1,” DeKosky said. “The results were a bit surprising and showed that the pathway to effective HIV-1 protection might be much shorter than we previously thought.”

The research focused on improving structural and biophysical features in the antibodies that bind to the HIV fusion peptide, “a known vulnerable site on HIV-1.”

“There are certain regions on this antibody which are more prone to accept the mutation that can enhance the binding affinity towards the fusion peptide,” Madan said. “We found a variant or a mutation—kind of a cluster towards the bottom portion of the antibody we call the framework region—that can enhance binding strength, and that correlates not towards a particular variant, but to more diverse HIV strains as well.”

The most effective variants in the library of mutants boosted the ability of vFP16.02 to recognize and bind to both soluble fusion peptides and the full HIV-1 envelope protein that is involved in viral entry of host cells. These antibody variants, which had mutations concentrated in antibody framework regions, achieved up to 37% neutralization breadth compared to 28% neutralization of the unmodified vFP16.02 antibody.

While the work won’t immediately result in development of a vaccine, it could point the way forward for vaccines that would protect against an array of HIV-1 variants.