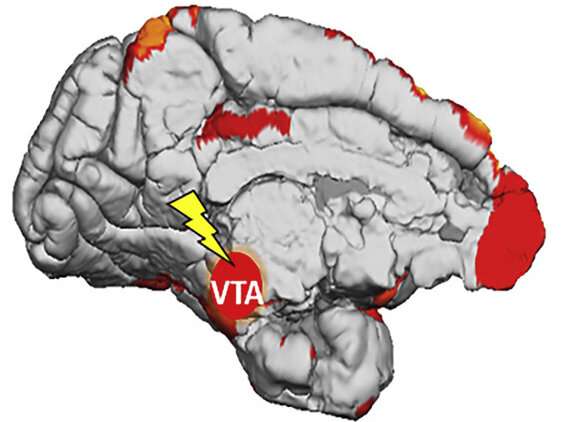 Researchers uncovered for the first time what happens in animals’ brains when they learn from subconscious, visual stimuli. In time, this knowledge can lead to new treatments for a number of conditions. The study, a collaboration between KU Leuven, Massachusetts General Hospital, and Harvard was published in Neuron.

An experienced birdwatcher recognizes many more details in a bird’s plumage than the ordinary person. Thanks to extensive training, he or she can identify specific features in the plumage. This learning process is not only dependent on conscious processes. Previous research has shown that when people are rewarded during the presentation of visual stimuli that are not consciously perceivable, they can still perceive these stimuli afterwards.

Although this is a known phenomenon, researchers were unsure as to how exactly this unconscious perceptual learning comes about. To find out, Professor Wim Vanduffel and colleagues studied the brains of two rhesus monkeys before and after they were exposed to subconscious visual stimuli.

The researchers activated part of the reward system at the base of the brain stem, the ventral tegmental area. This includes cells that produce dopamine, a molecule that is also released when you receive a reward. “Dopamine is a crucial messenger molecule of our motor and reward systems, and is extremely important for learning and enjoyment,” says Vanduffel. Activating the ventral tegmental area released dopamine, among other things. “By stimulating the brain area directly, we can causally link the activity in that area to perception or complex cognitive behavior,” explains Vanduffel.

While the brain area was activated, the monkeys were shown virtually invisible images of human faces and bodies. Because the images were very blurry and the monkeys had to perform a very different and difficult task at the same time, they could not consciously perceive these images. The same process was followed during the control tests, but the brain was not stimulated.

When the monkeys received subconscious visual stimuli while the ventral tegmental area was stimulated, they knew details about those images afterwards. For example, they knew whether the bodies shown were turned to the left or to the right. This was not the case when there had been no brain stimulation.

“Thanks to this experiment, we can demonstrate for the first time a direct causal relationship between this brain region and, as a result, also the likely link between dopamine and the subconscious learning of complex visual stimuli.”

The researchers also made a brain scan of the animals before and after the test. “We can see the blood flow in the brain, which gives an indication of which neurons are active. The more blood flow, the more activity,” explains Vanduffel. The scans showed that the task caused activity in the visual cortex of the brain and in areas important for memory. “With this data, we can zoom in to find out what is happening exactly at a neuronal level in these brain areas, in future experiments.”

“Since Freud’s insights in the 20th century, the scientific community has been wondering how subconscious sensations can affect us. Thanks to the present awareness that there is a strong resemblance between humans and monkeys, and new and advanced technologies, we can finally map such processes physiologically.”

Disturbances in the dopaminergic system can lead to numerous psychiatric and motor disorders, such as depression, addiction and Parkinson’s disease. A better understanding of how this system works, in various forms of learning, is therefore crucial to developing targeted therapies for these conditions.

“Parkinson’s is a motor disorder and is caused by dopamine-producing neurons dying off. However, current dopamine treatments may produce side effects because they also trigger the entire reward system, which not only reduces motor symptoms but can also lead to addictive behavior.” Fundamental research into the functioning of these brain areas will eventually lead to more targeted treatments with fewer side effects.

This insight is also useful in situations such as trauma, aging or oncological problems where an increase in brain plasticity, i.e. the ability to change, could be very useful. “By stimulating areas of the brain that produce dopamine, we could, for example, enable people to regain their speech more quickly or improve their motor skills after an accident or illness. This could even be done through medication, although we are still a long way from that,” explains Vanduffel.