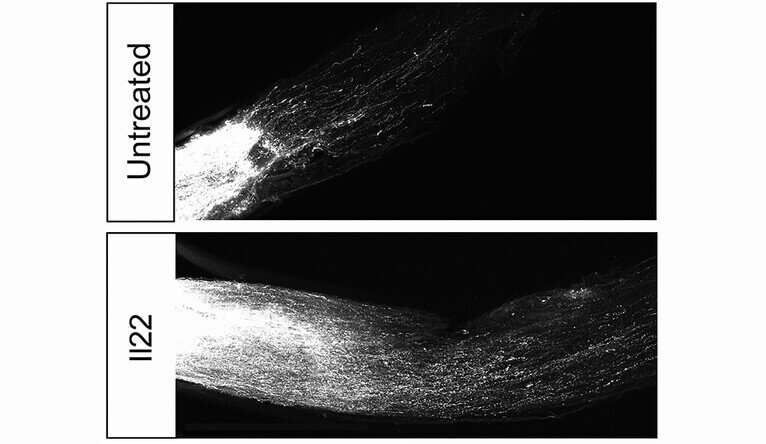 When central nervous system cells in the brain and spine are damaged by disease or injury, they fail to regenerate, limiting the body’s ability to recover. In contrast, peripheral nerve cells that serve most other areas of the body are more able to regenerate. Scientists for decades have searched for molecular clues as to why axons—the threadlike projections which allow communication between central nervous system cells—cannot repair themselves after stroke, spinal cord damage, or traumatic brain injuries.

In a massive screen of 400 mouse genes, Yale School of Medicine researchers have identified 40 genes actively involved in suppression of axon regeneration in central nervous system cells. By editing out one of those genes, they were able to restore axons in ocular nerves of mice damaged by glaucoma.

The findings are reported March 2 in the journal Cell Reports.

“This opens a new chapter in regeneration research,” said Stephen Strittmatter, the Vincent Coates Professor of Neurology and professor of neuroscience and senior author of the study.

Over the past several decades, Strittmatter and other scientists have found a handful of genes involved in suppressing regeneration of central nervous system cells. But the advent of RNAs to silence gene expression and new gene editing technologies capable of removing single genes and gauging their functional impact has allowed researchers to greatly expand their search for other culprits.

Among the 400 candidate genes the Yale team had previously identified in cultures of cortical neurons, they were able to show that one in 10 of those genes had direct in vivo impact on axon regeneration in central nervous system cells in mice. One of the 40 genes edited out encodes for an immune system regulator known as interleukin-22. Elimination of this immune mediator altered the expression of many neuronal regeneration genes and greatly increased axon regeneration in mouse models of glaucoma, they found.