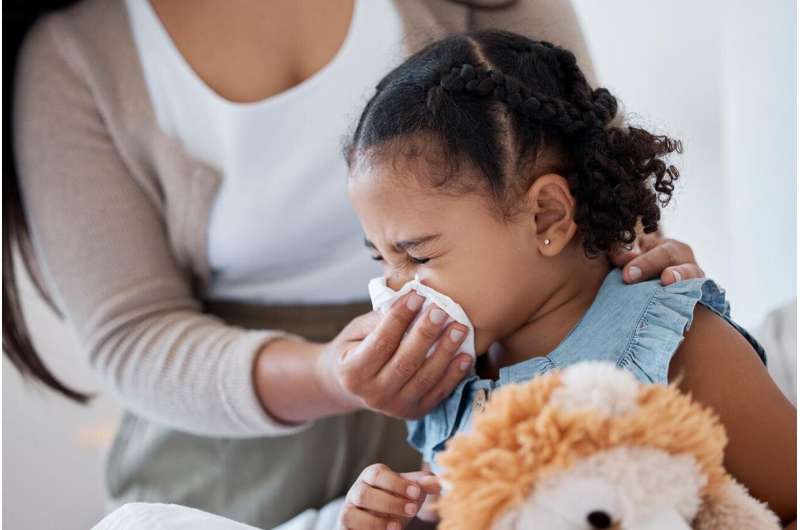 Though the risk of hospitalization is low, there are still certain signs and symptoms parents should know, according to Amanda Goddard, a clinical assistant professor of pediatrics at Tufts University School of Medicine and a physician at Maine Medical Center. As an infectious disease specialist, she knows what to watch for when cold and flu season starts to ramp up.

“We’ve known about this virus for a long time,” she says. “But this uptick is a bit unprecedented.”

Symptoms can vary by age

Most people have already had RSV by the age of two since the virus is so common. Symptoms are typically milder in older children and adults. Some adults might only have a runny nose or not even notice they’re sick, she says. The symptoms can be more severe for very young children and older people. Prematurity and underlying health conditions can increase risk of more severe symptoms for young children.

Parents of children with bronchiolitis may notice wheezing, as RSV is a common cause of a child’s first bout of wheezing, Goddard says. Symptoms of bronchiolitis also include fast breathing and something called retractions, where the areas below and between the ribs sink in with each attempt to inhale air. However, while a high fever happens with many other flu-like illnesses, it’s less common with RSV. Goddard recommends this information from the American Academy of Pediatrics on what to watch for in young children who might have RSV.

Symptoms can be relieved at home

It’s possible to treat many symptoms of RSV without heading to the doctor. For very young children, one main source of discomfort is congestion—with a stuffy nose, it’s hard for babies to breathe and eat normally. To relieve the congestion, Goddard says parents can use nasal saline and a suction bulb to remove mucus. Using a cool-mist humidifier can provide additional relief if the air in the home is dry.

Over-the-counter cough medicine is not recommended for babies and young children. Though honey can be used to suppress coughs, babies under one year of age shouldn’t eat honey due to risk of botulism. When a baby is over three months of age, Goddard suggests parents consult their child’s doctor to ask if they should use acetaminophen to suppress a fever, or ibuprofen if a baby is six months or older.

If parents notice wheezing or retractions, they should call their doctor. Fast breathing, which can sometimes cause head-bobbing in infants, is also a sign that the child needs medical attention, she says. Parents may also notice that a sick baby will be hungry more frequently, which probably means their congestion is affecting their ability to eat. If a baby isn’t making as many wet diapers as usual, that’s a sign of dehydration, and the baby should visit a doctor, Goddard suggests.

While fever is less common among babies with RSV compared to influenza, fevers can still happen. For babies under three months of age, a fever warrants a call to the doctor. Blue or gray lips, as well as grunting with severe difficulty breathing, or pauses in breathing for 15 seconds or more, are reasons to call 911.

A hospital stay, though unlikely, may be necessary. About one in 100 children under the age of 6 months will require hospitalization with RSV. At the hospital, Goddard says the child likely will be given oxygen, and sometimes fluids or a feeding tube if they have been having difficulty drinking.

This RSV season is different

Most RSV seasons begin around October and peak in January, but in the Northeast United States, RSV cases already peaked in October and November. Doctors and epidemiologists say RSV cases could peak again this winter. “The seasons for viruses have been very different the past year and a half,” Goddard says.

The reason behind the irregular season could be related to the COVID-19 pandemic. In 2020 and 2021, many parents kept very young children at home rather than sending them to in-person daycare or school. Staying at home, combined with other measures like masking and handwashing, prevented some young children from contracting RSV, Goddard says. Now that schools and daycares have returned to in-person instruction, children who would normally already have immunity to RSV are instead falling ill with it for the first time. However, Goddard says more research will be needed to definitively say what’s causing the irregular season.

RSV spreads through touch and through large droplets that people emit when they sneeze or cough. Sometimes, there’s not much parents can do to prevent RSV, especially if a child is attending school or daycare. But there are certain precautions that can lower the risk of contracting the virus.

If babies have older siblings that come home with a runny nose or other cold symptoms, the siblings should be kept away from the baby, if possible. As families gather for the holidays, Goddard also recommends parents of children under one to ask relatives who are sick to not touch the babies, even if the relative insists it’s just allergies.