Harvard University scientists can now use an organ on a chip to recreate human gut microbiomes and  diagnose disease-causing imbalances, a new study finds.

In the last decade, we’ve learned that the gut and the bacteria populations that live in it have far more influence on our overall health than previously thought.

But studying how these bacteria behave within the gut has been next to impossible – until now.

The team that developed an ‘organ-on-a-chip’ has now developed a chip intestine that can sustain the complex microbes that would exist in a human gut, as well as a microchip version of the human intestine.

Their latest achievement, they hope, will pave the way to being able to work out what a ‘healthy’ gut microbiome looks like so scientists can test, treat and prevent diseases that are linked to these microorganisms . 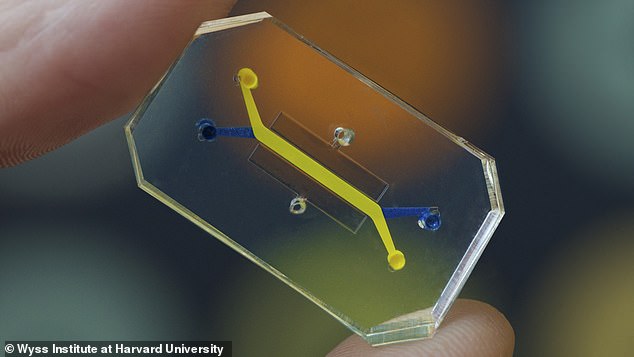 Researchers now believe that many diseases and conditions, including inflammatory bowel disease, cancer, metabolic, autoimmune disease and even psychiatric disorders are influenced if not caused by certain gut flora.

But like many other organs, figuring out exactly what causes these disease and how is a complex matter and is especially hard to test and prove.

Blood tests are imperfect ways to look at what is going on in an individual’s gut, and trying to interpret lab results can mean guess work for doctors and frustrating trial-and-error treatments for patients.

In vitro – or petri dish – studies make it easier and less invasive for scientists to study what exactly might underlie patient’s symptoms.

Yet a petri dish doesn’t exactly mimic the body’s mechanisms.

To solve that problem, a number of research groups have developed organs on chips, sot to speak.

These microprocessors mimic organ tissues – including those of kidneys, lungs and intestines – that match individual patients’ biological make-ups.

Now, for the first time, the Harvard team has created a microbiome on a chip.

In the past, when they’ve tried to research gut bacteria in a petri dish, scientists have struggled to keep gut microbes from devouring the ‘human’ cells or from dying off outside of their uniquely oxygen-deprived natural habitats.

But scientists at the Wyss Institute at Harvard University designed a new chip that mimics the lining of the intestine that directly interacts with the fecal matter, where our gut flora live.

‘The major paradigm shift in medicine over the past decade has been the recognition of the huge role that the microbiome plays in health and disease,’ said Dr Donald Ingber, who directs the Harvard and led the study.

‘By providing direct access to the microbiome and differentiated intestinal tissue, this method can be used to discover specific microbes or their metabolites that cause disease or that might help prevent these conditions, and because we use cells isolated from patients, this approach could be used for personalized medicine as well.’

The chip even comes equipped with sensors to tell the scientists if oxygen levels are getting to high or too low to maintain the fragile bacteria.

This close replica of a real human gut opens the door to working out what might cause everything from psychiatric disorders to gluten allergies.

‘We can culture region-specific intestinal tissue and microbiomes from the same individual to find associations that cause sensitivity or tolerance to specific pathogenic, inflammatory, and systemic diseases,’ said study co-lead author, Dr Francesca Gazzaniga.

‘We can culture region-specific intestinal tissue and microbiomes from the same individual to find associations that cause sensitivity or tolerance to specific pathogenic, inflammatory, and systemic diseases.’