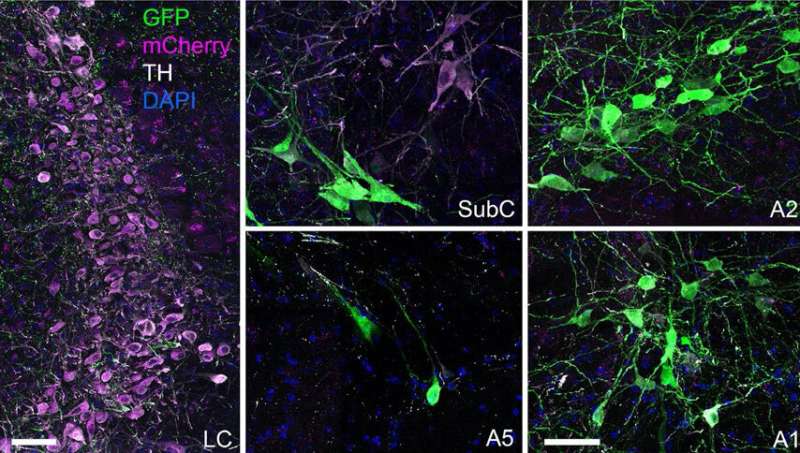 When you daydream, or ruminate on something bothersome, or ponder the past, or plan for the future, the part of your brain most engaged is the default mode network, or DMN, which includes part of the prefrontal cortex. Scientists have long hypothesized that changes to DMN dynamics play major roles in certain behaviors, such as those associated with attention deficit-hyperactivity disorder; and diseases, such as Alzheimer’s and Parkinson’s; and conditions such as depression and autism.

But scientists have not fully understood the precise mechanisms that control DMN dynamics. Now, UNC School of Medicine researchers led by Ian Shih, Ph.D., associate professor of neurology, have experimentally documented the interplay between neurons and brain chemicals across brain regions, leading to alterations in DMN dynamics.

Published in the journal Science Advances, this research in mice provides evidence for how DMN dynamics is altered by activating the locus coeruleus (LC)—a small brain nucleus in the brainstem that releases norepinephrine. It also suggests new targets for treatment to restore DMN function.

Shih and first author Esteban Oyarzabal, Ph.D., a UNC-Chapel Hill graduate student at the time of this research, led functional magnetic resonance imaging (fMRI) studies in a genetically modified mouse model that expresses synthetic receptors in the LC. Then they examined the LC’s influence on the DMN.

Creating a model to express these synthetic receptors allowed the researchers to manipulate brain cell activity by using compounds that can selectively activate these receptors. This “chemogenetic” technique pioneered by UNC pharmacology researcher Byran Roth, MD, Ph.D., is perfectly suited for Shih’s team to manipulate the LC during fMRI. What they found is that activating the LC led to a constricting of blood vessels in that region and, at the same time, increasing low frequency fMRI activity changes in the frontal cortical regions of the DMN.

The scientists then created an optical-measurement platform to simultaneous measure the amount of norepinephrine released, neuronal calcium activity, and brain blood volume changes. They demonstrated that norepinephrine from the LC can increase frontal cortical neuron spiking activity, while reducing blood volume.

“This has significant implications to the interpretation of the fMRI data,” Shih said, “because it’s been widely documented that neuronal and vascular activities in the brain are related. Now, we show that this coupling is affected by the presence of norepinephrine.”They also demonstrated that chemogenetic activation of LC-NE neurons strengthened the communication of neurons within the frontal cortical regions of the DMN. They discovered that the retrosplenial cortex and hippocampus regions of the brain can modulate this functional connectivity.