A new kind of blood vessels in our bones has been discovered by scientists.

Researchers found they provide most of the blood supply to the bones.

They also act as a ‘shortcut’ by carrying immune cells from the bone marrow to the injured area of the body – rather than the cells having to be ‘picked up’ by blood as it enters one end of the bone, travel through bone marrow, and exit the other end.

When analysing humans, the scientists found we too have similar blood vessels in the larger bones of our bodies.

The researchers hope their finding will lead to the development of new therapies that use this blood flow and immune cell migration to help treat inflammatory conditions, such as osteoarthritis. 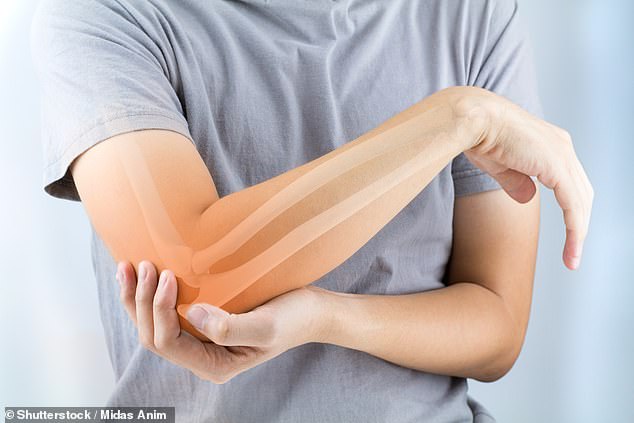 The research was carried out by the University Duisburg-Essen, Germany, and led by Dr Anika Grüneboom, from the institute for experimental immunology and imaging.

Human anatomy is rarely the subject of scientific breakthroughs, with most experts being confident the major organs and tissues have already been discovered.

‘It is really unexpected being able to find a new and central anatomical structure that has not been described in any textbook in the 21st Century,’ Dr Matthias Gunzer, study co-author and head of the institute, said.

He told NewScientist: ‘It’s totally crazy there are still things to find out about human anatomy – we have discovered blood vessels in a new place that we didn’t know about before.’

In their discovery, the scientists injected a fluorescent marker into the long bones of mice.

Long bones are hard and dense – providing strength, structure and mobility. An example is the femur, or thigh bone.

Osteoarthritis – sometimes called ‘wear and tear’ – is a condition that occurs when the surfaces within joints become damaged.

Cartilage covering the ends of bones gradually thin over time, and the bone thickens, according to Arthritis Research UK.

Around a third of people aged 45 years and over in the UK suffer from the condition. This equates to roughly 8.75 million people. At least 20 million are known to suffer in the US.

It is different to rheumatoid arthritis, a long-term illness in which the immune system causes the body to attack itself, causing painful, swollen and stiff joints.

Replacement joints are often necessary for osteoarthritis patients, because the joint has been worn down and causes agonising pain.

The bones were then examined under a fluorescence microscope and X-ray.

Results  – published in the journal Nature Communications – revealed long bones in mice are supplied with oxygen and nutrients by hundreds of newly-discovered capillaries along the entire bone shaft.

When the researchers looked at small pieces of human thigh bone, they found the same – albeit thicker – blood vessels, however, it is unclear if these carry immune cells.

Professor Gunzer himself even took part – lying in a scanner for six hours while it imaged his lower leg.

The discovered capillaries connect the inner and outer membranes that surround bones.

They are thought to play a critical role in helping to transport blood in and out of the bones’ hard shell.

This blood also found to be rich in immune cells, which the capillaries carry from the bone marrow to the circulation.

Up until now, blood was assumed to enter long bones via arteries at the bones’ end or through the few vessels along the bones’ shaft, before passing through bone marrow and exiting the other end.

‘This is too oversimplified and does not correctly reflect the true natural situation,’ Professor Gunzer said.

The researchers believe TCV re-modelling could play a role in the healing of fractures.

To better understand this, they are calling for studies that investigate what ‘maintains’ these capillaries.