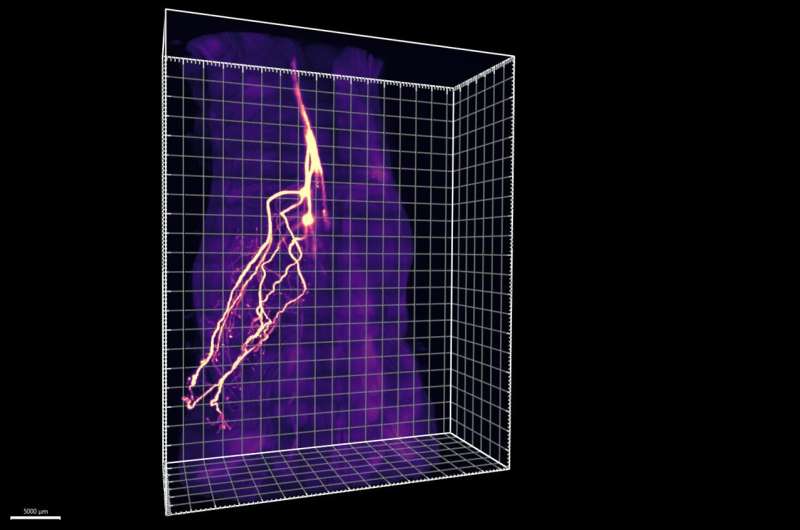 What did the fat say to the brain? For years, it was assumed that hormones passively floating through the blood were the way that a person’s fat—called adipose tissue—could send information related to stress and metabolism to the brain. Now, Scripps Research scientists report in Nature that newly identified sensory neurons carry a stream of messages from adipose tissue to the brain.

“The discovery of these neurons suggests for the first time that your brain is actively surveying your fat, rather than just passively receiving messages about it,” says co-senior author Li Ye, Ph.D., the Abide-Vividion Chair in Chemistry and Chemical Biology and an associate professor of neuroscience at Scripps Research. “The implications of this finding are profound.”

“This is yet another example of how important sensory neurons are to health and disease in the human body,” says co-senior author and professor Ardem Patapoutian, Ph.D., who is also a Nobel laureate and a Howard Hughes Medical Institute investigator.

In mammals, adipose tissue stores energy in the form of fat cells and, when the body needs energy, releases those stores. It also controls a host of hormones and signaling molecules related to hunger and metabolism. In diseases including diabetes, fatty liver disease, atherosclerosis and obesity, that energy storage and signaling often goes awry.

Researchers have long known that nerves extend into adipose tissue, but suspected they weren’t sensory neurons that carry data to the brain. Instead, most hypothesized that the nerves in fat belonged mostly to the sympathetic nervous system—the network responsible for our fight-or-flight response, which switches on fat-burning pathways during times of stress and physical activity. Attempts to clarify the types and functions of these neurons have been difficult; methods used to study neurons closer to the surface of the body or in the brain don’t work well deep in adipose tissue, where nerves are hard to see or to stimulate.

Ye and colleagues developed two new methods that enable them to overcome these challenges. First, an imaging approach called HYBRiD turned mouse tissues transparent and allowed the team to better track the paths of neurons as they snaked into adipose tissue. The researchers discovered that nearly half of these neurons didn’t connect to the sympathetic nervous system, but instead to dorsal root ganglia—an area of the brain where all sensory neurons originate.

To better probe the role of these neurons in adipose tissue, the group turned to a second new technique, which they named ROOT, for “retrograde vector optimized for organ tracing”. ROOT let them selectively destroy small subsets of sensory neurons in the adipose tissue using a targeted virus and then observe what happened.

“This research was really made possible by the way these new methods came together,” says Yu Wang, a graduate student in both the Ye and Patapoutian labs and first author of the new paper. “When we first started this project, there weren’t existing tools to answer these questions.”

The experiments revealed that when the brain doesn’t receive sensory messages from adipose tissue, programs triggered by the sympathetic nervous system—related to the conversion of white fat to brown fat—become overly active in fat cells, resulting in a larger than normal fat pad with especially high levels of brown fat, which breaks down other fat and sugar molecules to produce heat. Indeed, the animals with blocked sensory neurons—and high levels of sympathetic signaling—had increased body temperatures.

“This tells us that there’s not just a one-size-fits-all instruction that brain sends adipose tissue,” says Li. “It’s more nuanced than that; these two types of neurons are acting like a gas pedal and a brake for burning fat.”

The team doesn’t yet know exactly what messages the sensory neurons convey to the brain from adipose tissue, only that the connections and communications are key for keeping fat healthy. They are planning future research into what the neurons are sensing and whether other similar cells exist in additional internal organs.