Scientists have found a way to cure children with a rare ‘bubble boy disease’ which leaves them without an immune system.

A total of 10 children in the US have been treated with an experimental gene therapy which made them produce vital white blood cells for the first time.

Doctors at St Jude’s Children Research Hospital in Memphis, Tennessee, say they have ‘cured’ eight of the infants who can now live normal lives.

The altered genes used to fix the children’s defective DNA were delivered into the body using damaged HIV viruses.

Experts working on the project say the breakthrough is a first for children with this rare and life-threatening illness, and say only time will tell if it’s a permanent cure. 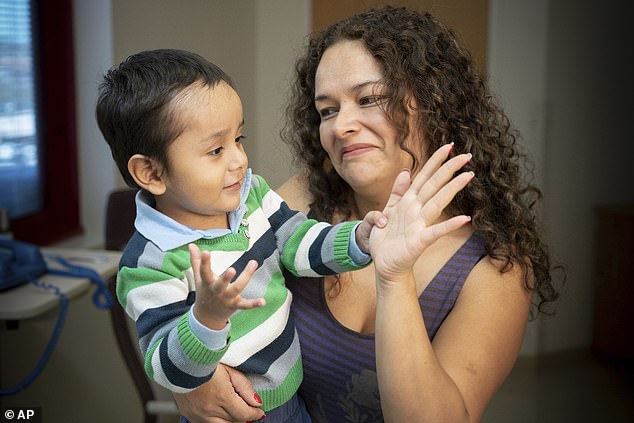 Two-year old Gael Jesus Pino Alva (pictured with his mother, Giannina Alva, in Memphis) was one of eight babies with ‘bubble boy disease’ who have had it corrected by gene therapy 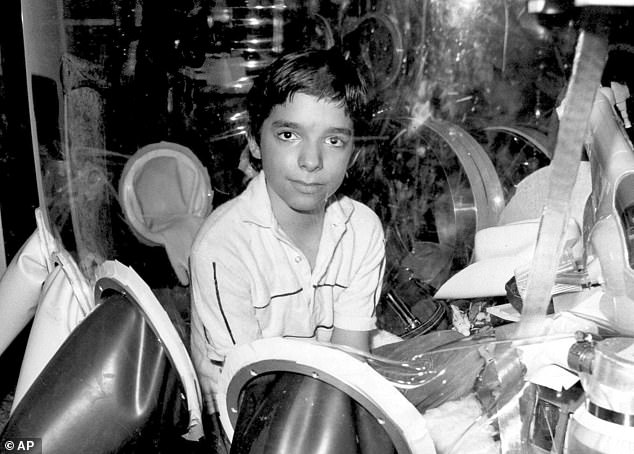 David Vetter, born in Texas in 1971, rose to fame as the original ‘bubble boy’ because he had to live in a tank as a result of his SCID

Each of the patients has X-linked severe combined immunodeficiency (SCID-X1), a condition present from birth which stops a child’s immune system working.

The illness is also known as ‘bubble boy disease’ because patients have to be kept in isolation tanks to avoid common infections like colds, which could kill them.

‘This therapy has cured the patients,’ said Dr Ewelina Mamcarz, one of the study leaders. But she added only time will tell if the cure is permanent.

She said: ‘These patients are toddlers now who are responding to vaccinations and have immune systems to make all immune cells they need for protection from infections as they explore the world and live normal lives.

‘This is a first for patients with SCID-X1.’

WHAT IS BUBBLE BOY DISEASE?

Bubble boy disease, medically known as severe combined immune deficiency (SCID), is caused by a defect in the IL2RG gene.

It means sufferers are born without an immune system and cannot fight even the simplest of infections – as a result the common cold can be fatal.

The only way of keeping these children safe from infection is to care for them in a bubble, a high-tech sterile room.

They can survive if they have a bone marrow transplant, giving them a new immune system – however this can take up to two years and is not successful in all patients.

If a transplant fails to improve a sufferer’s immunity, their organs can become irreversibly damaged, which can be life-threatening.

Many children with the illness die in the first few years of their life.

Without treatment, children with bubble boy disease usually die when they’re one or two because their body can’t fight off even the simplest of infections.

The condition affects around one in 200,000 babies, mostly boys, and was brought into the public eye by a boy called David Vetter, who was born in Texas in 1971.

David could only have been cured by a bone marrow transplant but he died shortly after having one, when he was just 12 years old.

He spent his life living in protected environments – in a large tank or with a plastic bubble on his head to keep germs out – but he died of cancer in 1984.

His lymphoma was later found to have been caused by the Epstein-Barr virus, one of the most common human viruses and one which the immune system usually controls.

After the new treatment, which is combined with chemotherapy to help the edited DNA to multiply once inside the patient’s body, most patients were able to leave the hospital within a month.

It has been tried on 10 children so far in Tennessee and UCSF Benioff Children’s Hospital in San Francisco. 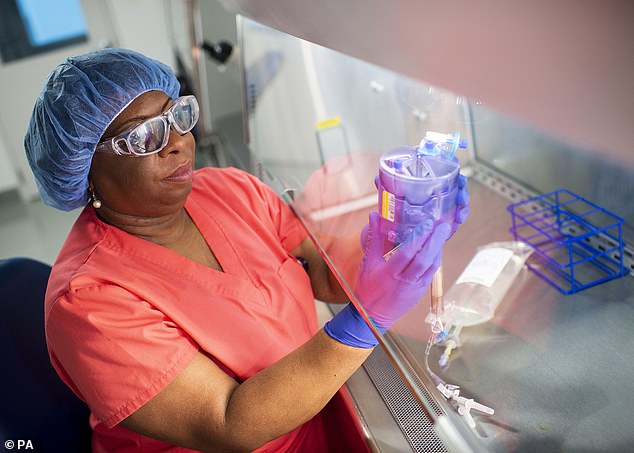 Researchers at the St Jude Children’s Research Hospital in Memphis, Tennessee, found a way to insert DNA corrected to fix the genetic illness into patients using modified HIV viruses (Pictured: A researcher at the hospital) 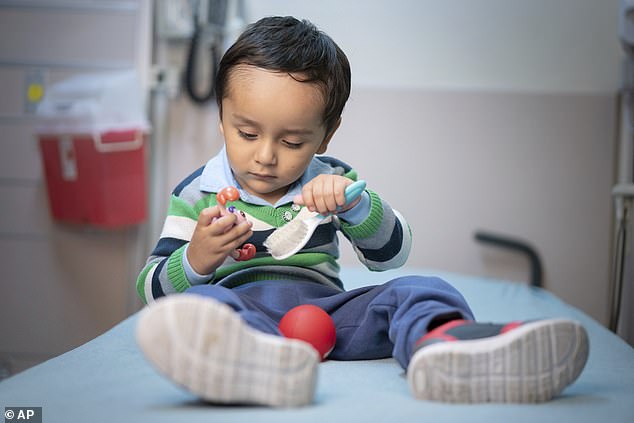 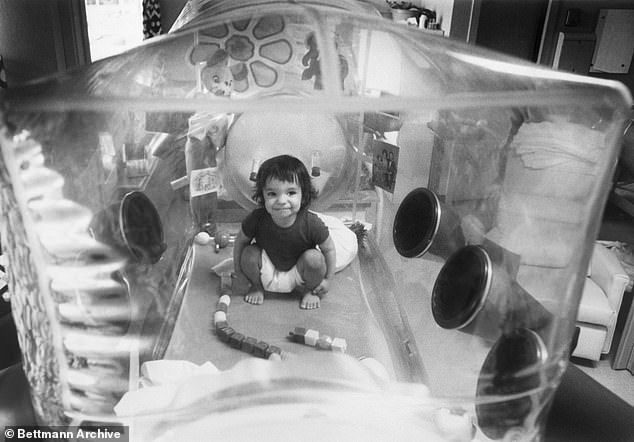 David Vetter, the original ‘bubble boy’, died aged 12 after developing cancer because of a common virus which is normally controlled by the immune systems of healthy people 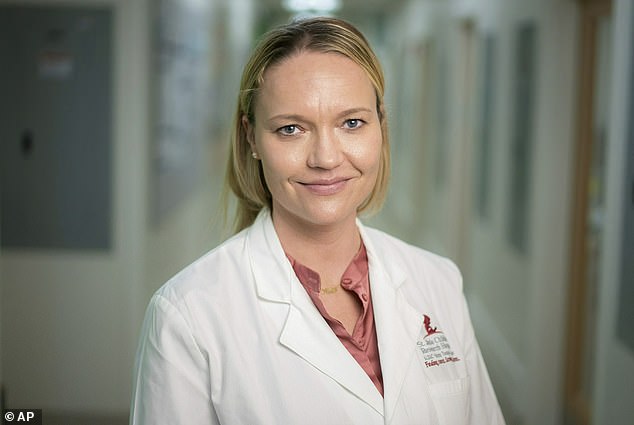 Dr Ewelina Mamcarz, a researcher on the study, said the young patients were ‘cured’ although only time will tell if they will permanently recover

WHO WAS DAVID VETTER, THE ORIGINAL BUBBLE BOY?

When he was born, the only cure available was a bone marrow transplant but no exact match could be found, so he spent the next 12 years living with the genetic illness.

Because he had no immune system, David was kept separated from a world filled with dangerous germs by living in a large, clear tank, or wearing a plastic bubble on his head.

An infection as simple as a cold can kill a child with SCID because their bodies cannot protect themselves from any illnesses.

From inside his bubble, David was home-schooled, had friends and played and fought with his sister.

His mother said he would hand out sweets to trick-or-treaters on Halloween using gloves extending from the bubble.

David had a bone marrow transfusion in 1984 in a bid to cure his SCID.

But four months later he died of cancer – a lymphoma believed to have bee triggered by infection with the Epstein-Barr virus.

EBV is one of the commonest human viruses and usually causes no problems in healthy people.

The results of eight patients were published in the New England Journal of Medicine and revealed they all now have working immune systems.

The therapy meant their bodies could, for the first time, create their own crucial white blood cells called T cells, B cells and natural killer (NK) cells.

It worked by scientists creating the gene required to fix sick patients’ DNA in a lab, then injecting it into their bodies inside weakened HIV viruses.

Because HIV viruses are able to hijack DNA and spread through the body, this allowed the ‘cured’ genes to multiply and kick-start the immune system.

Once the genes had been delivered, the modified HIV viruses self-destructed inside the patient’s blood.

All but one of the patients had working immune systems within three months of their first round of gene therapy – the final patient needed a second round before it succeeded.

Researcher Dr Mort Cowan said: ‘While longer follow-up is needed to assess any late effects of treatment, these results suggest most patients treated with this gene therapy will develop a complete durable immune response without side effects.’

Omarion Jordan, who turns one later this month, had the therapy in December.

His mother, Kristin Simpson, said: ‘For a long time we didn’t know what was wrong with him. He just kept getting these infections.’

She said learning that he had SCID ‘was just heartbreaking… I didn’t know what was going to happen to him.’

Thanks to the therapy, Omarion now has a normal immune system.