Simple blood test can diagnose pregnant women with postnatal depression BEFORE they give birth, study suggests

Pregnant women could be diagnosed with postnatal depression before they have even given birth thanks to a new discovery by scientists.

Around one in seven new mothers are diagnosed with postnatal depression within a year of giving birth in the US, while in the UK it is around one in 10.

The condition is defined by periods of sadness, loneliness and inability to care for their newborns that last longer than two weeks.

But researchers believe they have found a way to diagnose postnatal depression while a woman is still pregnant – using a simple blood test.

They looked closely at the system that cells use to communicate with each other, including molecules called messenger RNA (mRNA). 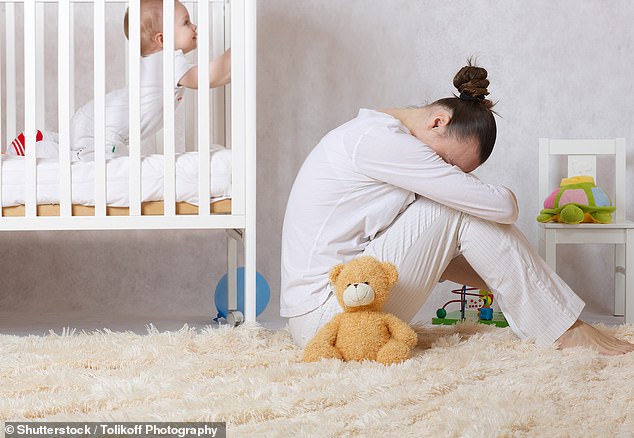 Around one in seven new mothers is diagnosed with postnatal depression within a year of giving birth in the US, while in the UK it is around one in 10 (file)

During pregnancy, this communication system ramps up to address needs for embryo implantation and growth.

The team measured the levels of thousands of different mRNA molecules during the second and third trimester of pregnancy, as well as up to six months after giving birth.

Analysis revealed the mRNA communication levels during pregnancy and the postnatal period were ‘extensively altered’ in the women who developed postnatal depression.

The findings, published in the journal Molecular Psychiatry, showed that in women who did develop postnatal depression, levels of some mRNA molecules were higher while some were lower than women who did not develop the condition.

The vast majority of these changes occurred during the pregnancy rather than after the women had given birth, they found.

The researchers said if further studies confirm their findings, they could potentially develop a blood test that can identify women – while they are still pregnant – who are at risk for developing postnatal depression.

Senior author Sarven Sabunciyan said: ‘With postpartum depression, there are many potential negative outcomes such as a high rate of suicide among mothers or a disruption in the baby’s cognitive, emotional and social development.

‘If we could identify mothers who may be more at risk ahead of the birth, we might prevent the adverse events.’

According to the NHS website many women feel a bit down, tearful or anxious in the first week after giving birth.

This is often called the ‘baby blues’ and is so common that it is considered normal.

However, if symptoms last longer than two weeks or start later, then it could be postnatal depression.

Treatments for the condition include self-help such as exercising regularly and getting enough sleep, psychological therapy or antidepressants.

WHAT IS POSTNATAL DEPRESSION?

Postnatal depression is a form of the mental-health condition that affects more than one in 10 women in the UK and US within a year of giving birth.

As many men can be affected as women, research suggests.

Many parents feel down, teary and anxious within the first two weeks of having a child, which is often called the ‘baby blues’.

But if symptoms start later or last longer, they may be suffering from postnatal depression.

Postnatal depression is just as serious as others form of the mental-health disorder.

Sufferers should not wait for their symptoms to just go away.

Instead they should recognise that it is not their fault they are depressed and it does not make them a bad parent.

If you or your partner may be suffering, talk to your GP or health visitor.

Treatments can include self-help, such as talking to loved ones, resting when you can and making time to do things you enjoy. Therapy may also be prescribed.

In severe cases where other options have not helped, antidepressants may be recommended. Doctors will prescribe ones that are safe to take while breastfeeding.

Postnatal depression’s cause is unclear, however, it is more common in those with a history of mental-health problems.

Lack of support from loved ones, a poor relationship with the partner and a life-changing event, such as bereavement, can also raise the risk.