A simple blood test could save lives by rapidly diagnosing a dangerous condition in pregnant women, researchers have shown.

The 15-minute test for pre-eclampsia allows doctors to begin treatment two days earlier than usual – resulting in a 68 per cent reduction in severe complications such as strokes, heart attacks and seizures among expectant mothers.

NHS bosses confirmed they would roll the PIGF test out across the country after a study published in the Lancet medical journal showed it was 95 per cent accurate.

Every year 23,000 pregnant women in Britain suffer pre-eclampsia, a deadly condition which threatens the life of both mother and baby.

It is notoriously difficult to diagnose because most of the symptoms – such as high blood pressure, swollen feet, headaches and nausea – are also common in normal pregnancy. 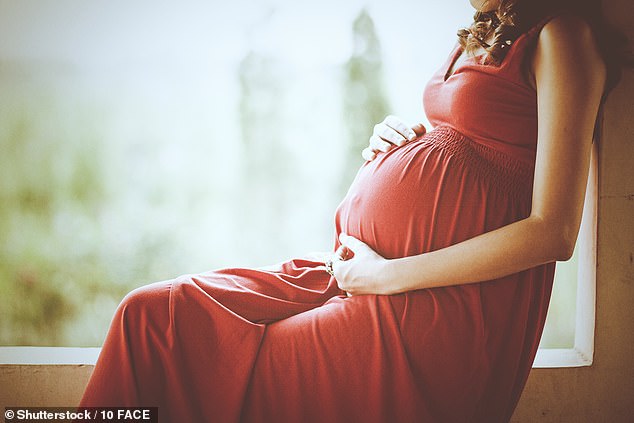 Pre-eclampsia is a pregnancy complication that causes high blood pressure, which can be deadly for both a woman and her unborn baby if untreated

Until now a diagnosis of pre-eclampsia has taken an average of four days from the time concerns were first raised, including 24 to 36 hours of monitoring in hospital – a nerve-wracking experience for pregnant women and a huge drain on NHS resources.

But the PIGF blood test – which works by detecting chemicals from the placenta circulating in the blood – slashes this in half, the study showed.

Thousands of women can be immediately reassured they are not at risk and sent home, while those who the blood test show are of concern are admitted for monitoring.

If pre-eclampsia is confirmed doctors then start treatment – which usually involves delivering a baby early.

Study leader Professor Lucy Chappell of King’s College London said: ‘For the last hundred years, we have diagnosed pre-eclampsia through measuring blood pressure and checking for protein in a woman’s urine.

‘These are relatively imprecise and often quite subjective.

‘We knew that monitoring PlGF was an accurate way to help detect the condition but were unsure whether making this tool available to clinicians would lead to better care for women. Now we know that it does.’

The study involved 1,035 women with suspected pre-eclampsia at 11 hospitals across the UK.

It showed the average time to pre-eclampsia diagnosis was cut from 4.1 days to 1.9 days.

Serious complications for the mother were cut from 5.3 per cent to 3.8 per cent – which when adjusted for age and pre-existing conditions resulted in a reduced risk of 68 per cent.

The single test resulted in no change in the likelihood of complications for the baby – but the researchers are launching a second trial to see whether repeat testing could help infants as well as mothers.

Pre-eclampsia, which is caused by a problem with the placenta, occurs in the second half of pregnancy and is a major cause risk of stillbirth and miscarriage.

It is extremely dangerous for the mother herself – and is the second leading cause of maternal death after sepsis.

Because it is so difficult to diagnose doctors until now have admitted thousands of healthy pregnant women for monitoring, just in case they had the condition.

As well as cutting dangers for women the tests are expected to save the NHS £16million a year in unnecessary hospital stays.

The test has been available for three years but only three NHS hospitals have used it routinely.

Health bosses announced they will make the test, which costs £70 to £80, more widely available across the country in light of the new results.

Professor Chappell said: ‘The evidence shows that widespread PlGF testing could saves lives and it is fantastic news that NHS England agree.’

Professor Tony Young, national clinical lead for innovation at NHS England, said: ‘This innovative blood test, as set out in this new study, helps determine the risks of pre-eclampsia in pregnancy, enabling women to be directed to appropriate care or reduce unnecessary worry more quickly.

‘The NHS, with partners in government, will be making this test more widely available across the NHS as part of our plans to ensure as many patients as possible can benefit from world-class health innovations.’

Pre-eclampsia is a pregnancy complication that causes high blood pressure, which can be deadly for both a woman and her unborn baby if untreated.

It usually begins after 20 weeks of pregnancy in women whose blood pressure is typically normal.

The most effective treatment is an early delivery; usually via C-section.

However, this may not be best for the baby if it is early on in the pregnancy.

Pre-eclampsia affects about 25,000 women in England and Wales each year, and four per cent of pregnancies in the US.

It can have no symptoms if it develops gradually rather than coming on suddenly.

A blood pressure reading above 140/90 millimeters of mercury (mm Hg) on two occasions is usually the first sign.

Other symptoms may include:

Sudden weight gain, and swelling in the face and hands, are also symptoms, however, these can occur during normal pregnancies.

Pre-eclampsia is thought to begin in the placenta when its blood vessels narrow and do not react to hormones properly.

This reduces the amount of blood that flows through them.

Its underlying cause may be genetic, due to a problem with a woman’s immune system or existing blood vessel damage.

A woman is more at risk if she, or a member of her family, suffered from pre-eclampsia before.

The risk is also highest during the first pregnancy, and if a woman is over 40; obese; black; having a multiple birth, like twins; or conceived via IVF.

If untreated, pre-eclampsia can restrict a baby’s growth or cause it to be delivered early.

The placenta can also separate from the uterus wall, which can lead to severe bleeding.

A woman may also suffer seizures, organ damage and even heart disease as a result of untreated pre-eclampsia.

Although treatment is usually inducing labour, if it is too early to deliver the baby, medications may be prescribed to lower a woman’s blood pressure.

There is no clear advice on how to prevent pre-eclampsia, however, research suggests taking a low-dose of aspirin and calcium supplements may help.

Pregnant women should talk to their doctor before taking any drugs or supplements.