Sleeping for less than four hours per night can cause dangerous fat to begin lining a person’s organs and potentially cause heart and kidney issues, study finds

Poor sleeping habits may not just leave a person tired during the day, it could also pose a danger to their health, a new study finds.

Researchers at the Mayo Clinic in Rochester, Minnesota, found that people who sleep for less than four hours per night are at an increased risk of developing harmful fat lining their organs.

Sleep deprivation can cause people who are relatively healthy to develop ‘visceral’ fat in the belly, which can eventually cause issues for the heart and other organs in the body over time.

The research has grave implications, as more and more people are spending less time sleeping as a result of the prevalence of smart phones, longer working hours, and other factors. 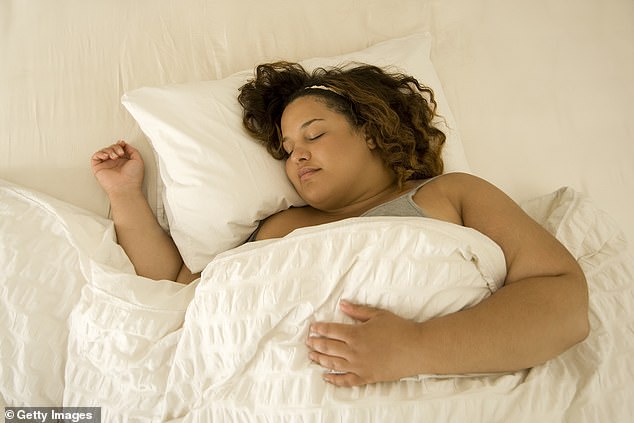 ‘Our findings show that shortened sleep, even in young, healthy and relatively lean subjects, is associated with an increase in calorie intake, a very small increase in weight, and a significant increase in fat accumulation inside the belly,’ Dr Vinred Somers, the study’s lead investigator, said in a statement.

Researchers, who published their findings Tuesday in the Journal of the American College of Cardiology, gathered data from 12 healthy, non-obese, people between the ages of 19 and 39 for the study.

One group was only given a four hour window to sleep every night, while the other was given nine hours.

The research team measured energy intake and expenditure, weight, body composition and fat distribution on each subject after the period was complete.

Those sleeping of a limited schedule were found to have gained more weight than their peers in the nine hour group.

Overall body fat levels stayed equal across both groups, but people who were on the four hour sleep schedule had high levels of visceral fat in their stomachs.

‘Normally, fat is preferentially deposited subcutaneously or under the skin. However, the inadequate sleep appears to redirect fat to the more dangerous visceral compartment,’ Somers explained. 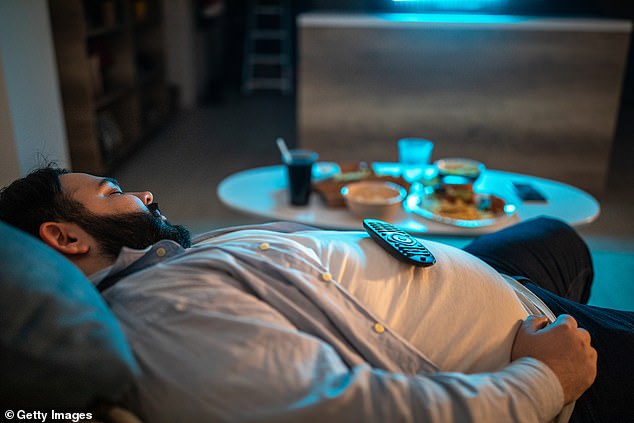 The CDC warns that around one in three Americans are not getting enough sleep, and recommends Americans do more to avoid screen time before bed

Even after those who were in the limited sleep study group returned to more normal, healthy, schedules, the fat remained.

‘Importantly, although during recovery sleep there was a decrease in calorie intake and weight, visceral fat continued to increase,’ Somers continued.

‘This suggests that inadequate sleep is a previously unrecognized trigger for visceral fat deposition, and that catch-up sleep, at least in the short term, does not reverse the visceral fat accumulation.

‘In the long term, these findings implicate inadequate sleep as a contributor to the epidemics of obesity, cardiovascular and metabolic diseases.’

Those who were a part of the limited sleep group also consumed around 300 more calories per day than their peers, leading to the weight gain.

The detection of visceral fat makes it so the weight gain is only a small part of the concerns with sleep deprivation, though.

‘The visceral fat accumulation was only detected by CT scan and would otherwise have been missed, especially since the increase in weight was quite modest — only about a pound,’ Dr Naima Covassin says.

‘Measures of weight alone would be falsely reassuring in terms of the health consequences of inadequate sleep.

‘Also concerning are the potential effects of repeated periods of inadequate sleep in terms of progressive and cumulative increases in visceral fat over several years.’ 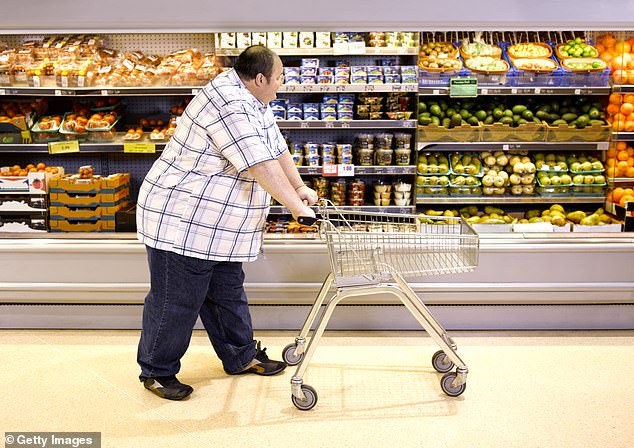 Visceral fat has been tied to Type 2 diabetes, heart disease and high cholesterol and more.

The lining of it around your organs can also cause heart and kidney failure if it becomes too severe.

Somers said that increased exercise and better dietary choices can help offset the harm caused by the fat for people that are not getting enough sleep.

The amount of Americans that fall into that category is starting to increase.

The Centers for Disease Control and Prevention (CDC) warns that one out of three Americans are not getting enough rest on a nightly basis.

‘As a nation we are not getting enough sleep,’ Dr Wayne Giles, director of CDC’s Division of Population Health, said in a public health notice.