Social media giants must do more to crack down on ‘damaging’ anti-vaccination myths, Health Secretary Matt Hancock has said.

He said social networking sites, of which the biggest include Facebook and Twitter, must police the spread of anti-vaxxers’ propaganda.

Speaking on BBC Breakfast, the cabinet minister even suggested new laws could be needed to try and stop the spread of lies about vaccines online.

Anti-vaxx ideas have snowballed from a now-debunked scientific paper in the ’90s which claimed MMR could be linked to autism into claims they just don’t work or are harmful, despite evidence proving the claims are untrue. 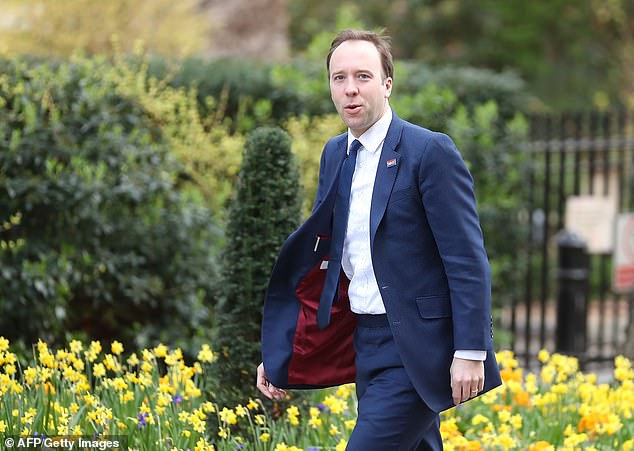 ‘This is exactly the sort of thing we should be spending our time on and talking about and, if necessary, legislating for,’ Mr Hancock said.

‘As a country we can make decisions on these sorts of things.

‘I want to see social media companies doing far, far more to take down this material which is so damaging.’

Anti-vaxxers are a growing problem in the Western world because they try to convince people that vaccinating children is bad for their health.

The World Health Organization said they are one of the top 10 threats to human health in 2019, alongside air pollution, a flu pandemic and Ebola.

One of the most common myths is that the MMR jab increases the risk of autism, but this has been proved to be a lie.

Anti-vaxxers also claim vaccines don’t work and that they may infect children with the illness they try to prevent – both of which are also untrue.

If fewer people get vaccinated – and the MMR jab uptake is at a seven-year low in the UK – deadly diseases like mumps, measles and polio could return.

‘Vaccines only work if almost everybody takes them,’ Mr Hancock added. ‘That is the whole point.

‘They are clearly the right thing to do, scientifically. There’s clear guidance from experts and doctors on that.

SOCIAL MEDIA A ‘BREEDING GROUND’ FOR ANTI-VAXXERS, BUT COMPANIES VOW TO CRACK DOWN

The Royal Society for Public Health warned in January that children’s lives are being put at risk by anti-vaccination myths spreading on social media sites like Facebook and Twitter.

Half of parents with children under-two reported seeing negative messages about immunisations on social media, a report found.

RSPH chief executive, Shirley Cramer said: ‘With the rise of social media, we must guard against the spread of “fake news” about vaccinations.

‘We have found worrying levels of exposure to negative messages about vaccinations on social media, and the spread of misinformation – if it impacts uptake of vaccines – could severely damage the public’s health.’

Instagram revealed this month it would block anti-vaxx hashtags in an attempt to stop medical misinformation being shared.

Facebook also said it will try to limit the reach of groups and pages spreading the misinformation by lowering their ranking in search results and preventing the website from suggesting them in the search bar, The Guardian reported.

‘But online there are these pernicious messages being sent to people whether they search for terms about vaccines or not.

‘Sometimes just because they have got the right characteristics – maybe they have small children.

‘We need to make sure this misinformation or disinformation is stopped because it can be damaging to the public health.’

But the World Health Organization has warned people are becoming complacent about getting the jab.

Cases of measles, which usually only causes a fever but can cause pneumonia or the brain infection encephalitis, surged last year.

Globally, there was a 50 per cent rise in measles cases last year and more than 900 people died in an outbreak on the African island of Madagascar.

‘This is a wake-up call,’ said Henrietta Fore, executive director of UNICEF.

‘We have a safe, effective and inexpensive vaccine against a highly contagious disease – a vaccine that saved almost a million lives every year over the last two decades.’

The number of children being given the MMR vaccine in England has fallen for the fourth year in a row, with immunity now at its lowest since 2011.

Children are expected to have their first dose before their second birthday but only 91.2 per cent of toddlers in England are meeting this target.

England is failing to hit the 95 per cent immunisation rate the World Health Organization recommends to protect the country from contagious infections.

‘It is a safe vaccination, we know that, and we’ve saved millions of lives across the world.

‘People who spread these myths, when children die they will not be there to pick up the pieces or the blame.’

In 1995, gastroenterologist Andrew Wakefield published a study in The Lancet showing children who had been vaccinated against MMR were more likely to have bowel disease and autism.

He speculated that being injected with a ‘dead’ form of the measles virus via vaccination causes disruption to intestinal tissue, leading to both of the disorders.

After a 1998 paper further confirmed this finding, Wakefield said: ‘The risk of this particular syndrome [what Wakefield termed ‘autistic enterocolitis’] developing is related to the combined vaccine, the MMR, rather than the single vaccines.’

At the time, Wakefield had a patent for single measles, mumps and rubella vaccines, and was therefore accused of having a conflict of interest.

Nonetheless, MMR vaccination rates in the US and the UK plummeted, until, in 2004, the editor of The Lancet Dr Richard Horton described Wakefield’s research as ‘fundamentally flawed’, adding he was paid by a group pursuing lawsuits against vaccine manufacturers.

On January 6 2011, The British Medical Journal published a report showing that of the 12 children included in Wakefield’s 1995 study, at most two had autistic symptoms post vaccination, rather than the eight he claimed.

At least two of the children also had developmental delays before they were vaccinated, yet Wakefield’s paper claimed they were all ‘previously normal’.

Further findings revealed none of the children had autism, non-specific colitis or symptoms within days of receiving the MMR vaccine, yet the study claimed six of the participants suffered all three.