Herpes viruses come back to life in most astronauts who travel to space, according to a study.

Researchers said about one in 14 people (seven per cent) already carrying a virus had a breakout while in space.

And around 57 per cent of astronauts studied shed more of the viruses than they did on earth.

The viruses, which cause cold sores, shingles and glandular fever, become dormant over time but periods of stress or exhaustion can bring them back to life.

If going into space weakens the immune system enough to allow inactive viruses to resurface, it could pose health risks for people on longer expeditions, experts said. 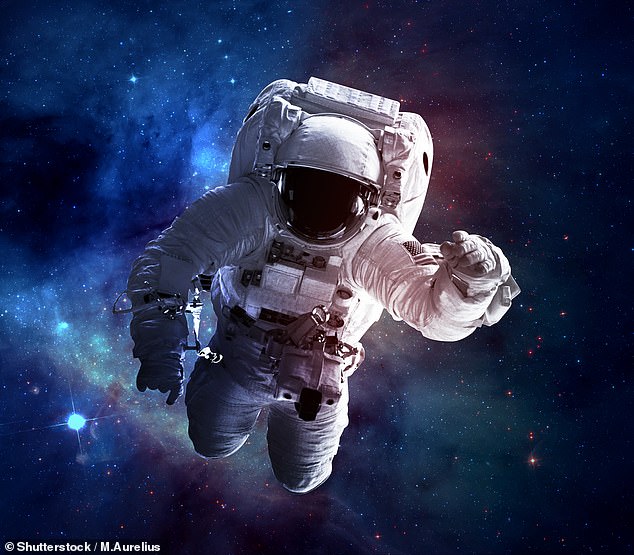 The longer astronauts spend in the space the higher the levels of herpes viruses found in their bodily fluids, according to research, because the stress and exhaustion caused by space travel weakens their immune system (stock image)

NASA-funded scientists in the US studied 89 astronauts in both space shuttle flight and on the International Space Station (ISS), if they went there.

They tested the astronauts’ saliva for traces of HSV-1, the strain of herpes which causes cold sores and can also affect the genitals and other parts of the body.

Some 53 per cent of shuttle-flight astronauts and 61 per cent of ISS astronauts had traces of the virus shedding – when it reproduces and tries to spread.

And the longer people spent in space, the more active the virus became and the larger the quantities in which it was detected.

The study said ‘several’ people in the study developed shingles while in orbit.

The researchers said space travel triggers a spike in stress hormones like cortisol and adrenaline, which are known to weaken the immune system.

Astronauts were also found to produce increasing amounts of the Epstein-Barr virus, which causes glandular fever; varicella-zoster, which causes chickenpox and shingles; and cytomegalovirus, which is usually harmless. All are herpes viruses.

‘NASA astronauts endure weeks or even months exposed to microgravity and cosmic radiation – not to mention the extreme G forces of take-off and re-entry,’ said study author Dr Satish Mehta.

HOW DO VIRUSES REACTIVATE?

Herpes viruses, such as those which cause cold sores, genital herpes, glandular fever, chickenpox and shingles, become dormant in the body over time.

This means they stop causing symptoms but never go away.

The viruses live in the nerves, where they can spend months or years without producing any signs of infection if the immune system can keep them under control.

Some people will become asymptomatic carriers of the viruses, meaning they have the virus in their body and could pass it on, but don’t have sores or other symptoms.

If the immune system is weakened, however, the viruses can break out and cause illnesses, such as sores on the mouth or genitals, or on the skin as in the case of shingles.

Antiviral medications can help to get these symptoms under control and suppress the viruses if people suffer regularly, but the body cannot be cleared of them.

Professor Rolf Renne, from the University of Florida, said in a study in 2014: ‘Probably 95 per cent of us have been infected with at least one herpes virus, but many people never have a problem with it.’

‘This physical challenge is compounded by more familiar stressors like social separation, confinement and an altered sleep-wake cycle.’

He added: ‘During spaceflight there is a rise in secretion of stress hormones like cortisol and adrenaline, which are known to suppress the immune system.

‘In keeping with this, we find that astronaut’s immune cells – particularly those that normally suppress and eliminate viruses – become less effective during spaceflight and sometimes for up to 60 days after.’

Dr Mehta and his team suggested longer periods of time spent in space – for example, flights to Mars which could take almost a year in each direction – could pose health risks for space explorers.

And the astronauts may also be more likely to spread the viruses when they return to earth.

Travelling to space is known to be damaging to astronauts’ health – they may suffer from weaker muscles and bones, a higher risk of Alzheimer’s disease and cancer, and problems with their heart rhythms.

Herpes viruses, of which there are eight types which infect humans, are usually spread by skin-to-skin contact and are extremely common.

More than two thirds of under-50s worldwide (3.7billion) are thought to have HSV-1, according to the World Health Organization.

More than 90 per cent of people are believed to carry the Epstein-Barr virus, while almost a third of people develop shingles, according to the Centers for Disease Control and Prevention.

The research was published in the journal Frontiers in Microbiology.