Stomach-churning footage shows an audiologist removing a 2.5cm chunk of WAX from a patient’s ear

Stomach-churning footage shows the moment an audiologist extracts a mammoth chunk of ear wax that left a patient too scared to fly.

Neel Raithatha, from Leicester, was stunned when he finally prised the huge block of wax from the patient’s ear in February.

He and his patient could be heard gasping after removing the chunk of wax, which measured a whopping 2.5cm – the entire length of an average ear canal.

It had left the patient scared to fly for fear of the pressure causing pain in his ears. 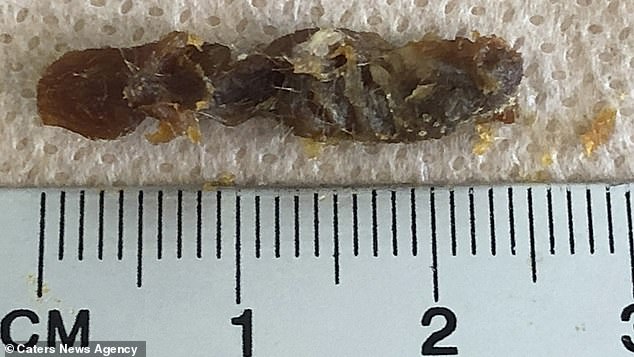 The chunk of wax measured a whopping 2.5cm – the entire length of an average ear canal

Mr Raithatha, an audiologist with 10 years experience, could be heard saying ‘Wow’ as he extracted the wax at his Hear Clinic surgery in Leicester.

The video shows him scraping away at layers of wax until the ear canal is finally cleared before using a cup suction to remove the chunk of wax in one whole piece.

The procedure was performed via an endoscope, by which Mr Raithatha examines inside the patient’s inner ear cavity. 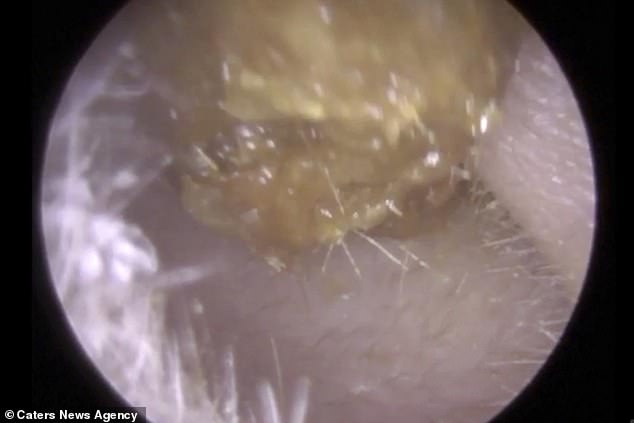 Neel Raithatha, from Leicester, was stunned when he finally prised the huge block of yellow substance from the patient’s ear 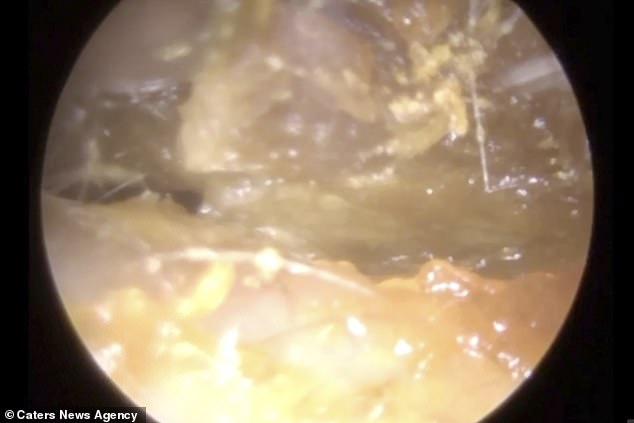 WHAT IS EARWAX BUILD UP?

Earwax usually falls out on its own but, in some cases, it can become blocked.

It cannot be prevented as the wax is there to protect ears from water, dirt germs, infection and foreign bodies.

You are more likely to suffer buildup if:

You can try using over-the-counter wax softening drops or warm water to irrigate your ears.

If this doesn’t work, seek professional medical help in case of infection.

Mr Raithatha, who has 43,000 subscribers on YouTube and is known as the Wax Whisperer, said: ‘Both the client and I were in complete shock.

‘My reaction upon removal was “Wow” and the client’s reaction when he saw the piece of ear wax himself was “Oh my goodness”. Fortunately, the eardrum was intact and healthy.’

Last year, Mr Raithatha carried out a similar procedure on a woman who had such a big build-up of ear wax that it reportedly left her deaf.

It comes after health officials declared in November 2017 that cotton buds should not be used to clean ears.

Inserting a bud could damage the ear and push wax further down, according to the National Institute for Health and Care Excellence.

The draft guidance also said ear syringing, in which a metal syringe is used to pump water manually into the ear to clear out wax, is potentially harmful.

Committee members agreed that buds may be a ‘hazard’ that can cause infections or push wax further into the ear canal.

The guideline said the ear canal is ‘self-cleaning’, with excess wax falling out on its own, and that the entrance to the ears can be cleaned with a damp flannel.