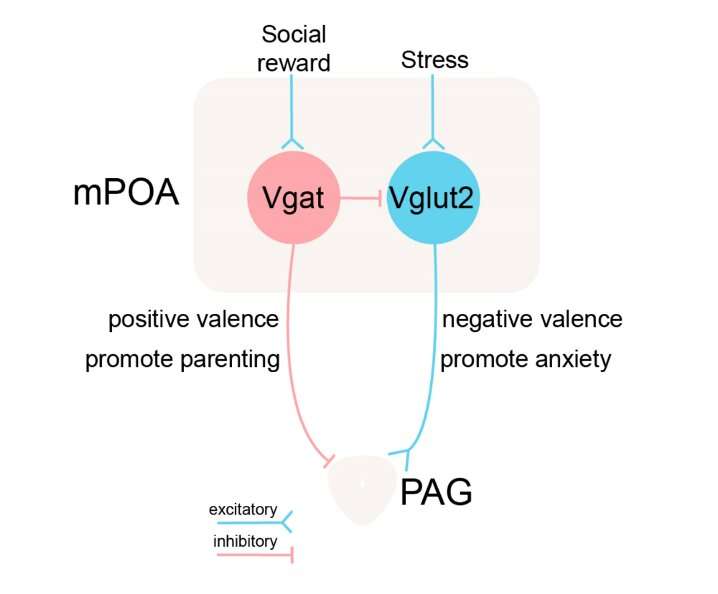 Anxiety is a common emotional state that can be particularly pronounced or difficult to process for individuals diagnosed with anxiety disorders and depression. While neuroscientists have carried out numerous studies aimed at better understanding the neural processes underpinning anxiety, the ways in which it is generated and sustained over time are still poorly understood.

Researchers at University of Southern California have recently carried out a study investigating the role of the medial preoptic area (mPOA) of the brain in mediating anxiety and parental behavior. Their paper, published in Nature Neuroscience, offers valuable insight that could inform the development of effective pharmacological tools to reduce levels of anxiety.

“This research was part of a series of studies on negative emotion elicited by sensory stimuli,” Li I. Zhang and Huizhong Whit Tao, two of the researchers who carried out the study, told Medical Xpress. “In 2018, we published a paper in Neuron focusing on a structure in the basal forebrain, namely the medial septum (MS). We found that the MS is positioned in a noncanonical (nonconventional) auditory pathway and that MS neurons are activated by high-intensity broadband noise but not by pure tones.”

In one of their past studies, Zhang and Tao observed that mice do not like loud noises and generally avoid places that they associate with these sounds. In addition, they found that inhibiting neural activity in the MS could reduce this pattern of place avoidance. They also activated neurons in the MS using electric shocks and found that this increased the mice’s avoidant behavioral patterns.

“Our observations suggested that the MS is part of a circuit that processes aversive sensory stimuli and generates negative emotion,” Zhang and Tao said. “One of downstream targets of the MS is the medial preoptic area (mPOA). Therefore, we wondered whether mPOA neurons are also activated by aversive sensory stimulation of various modalities and whether directly stimulating mPOA neurons can produce negative emotion.”

First, the researchers tried to determine whether mPOA glutamatergic neurons could be activated by aversive sensory stimuli, also known as stressors. To do this, they exposed mice to a variety of stressors, for instance, forcing them to swim, placing them on hot plates or giving them small electric shocks. Subsequently, they used an antibody against the gene c-Fos to detect neuronal activation (as the expression of this gene in neurons tends to increase after they have been activated).

“We also directly recorded neuronal spiking activity from mPOA glutamatergic neurons,” Zhang and Tao said. “These neurons were tagged by expressing a light-activated channel (channelrhodopsin 2, ChR2), so we could identify them electro-physiologically in vivo.”

Interestingly, Zhang and Tao observed that mPOA glutamatergic neurons responded acutely to aversive sensory stimuli, such as electric shocks. Moreover, their basal level activity increased for several hours after the mice received electric shocks, and this activity increase was temporally correlated with anxiety-like behavior in the mice.

“We next examined whether directly activating these neurons would increase anxiety-like behaviors,” Zhang and Tao said. “To do this, we expressed ChR2 in these neurons (using a cell-type-specific Cre line) so that we could artificially activate them using LED light (i.e., optogenetics). Using standard behavioral assays for testing anxiety levels such as the open field test (OFT) and the elevated plus maze (EPM) test, we found that, indeed, stimulating mPOA glutamatergic neurons at 10 Hz increased anxiety-like behaviors.”

When the researchers stimulated the mice’s mPOA glutamatergic neurons at a higher frequency (15 Hz), they observed even more dramatic behavioral changes. More specifically, they found that the mice started jumping frequently in environments that they could not escape from, suggesting that they were in an extremely anxious state.

Remarkably, the mice even preferred to remain in places that were more physically dangerous (i.e., where they could be physically harmed) than places associated with the activation of mPOA glutamatergic neurons via the LED light. These findings show that the activation of these neurons generated extremely negative emotions.

Essentially, the researchers found that in addition to generating negative emotions, increased activity of mPOA glutamatergic neurons mediated prolonged anxious states after a stressful event (i.e., after the mice were exposed to a stressor). In addition to physical stress, Zhang and Tao tested the involvement of mPOA neurons in social stress, especially in the context of parental behavior, by exposing a resident virgin male mouse to a foreign pup.

“Exposing a resident virgin male (but not female) mouse to a foreign pup induces aggression and increases anxiety levels in the male,” Zhang and Tao said. “To detect neuronal activation during social behaviors, we expressed a Ca2+ sensor (GCaMP6) in mPOA glutamatergic neurons and monitored population Ca2+ signals using fiber photometry. We found that during each bout of interactions with the foreign pup, the Ca2+ signal increased in male but not female mice. This indicates that foreign pups are a social stressor to male but not female mice.”

The researchers also showed that inhibiting mPOA glutamatergic neurons using optogenetic and chemogenetic techniques reduced levels of aggression in the male mice, while also promoting parenting behavior, such as pup grooming, in both male and female specimens. Their findings suggest that these neurons mediate anxiety induced by social stress and that there is an opposing relationship between anxiety and parental behavior. In other words, when the mice had high levels of anxiety, their parental behaviors were suppressed.

“The mPOA glutamatergic neurons are excitatory neurons, while the other half of mPOA neurons are GABAergic and inhibitory,” Zhang and Tao said. “Using similar approaches in an inhibitory cell-specific Cre line, we further demonstrated that the GABAergic mPOA neurons play a completely opposite role. Therefore, by balancing the activity between the glutamatergic and GABAergic neuronal populations, the mPOA can regulate both anxiety and parental behavior.”