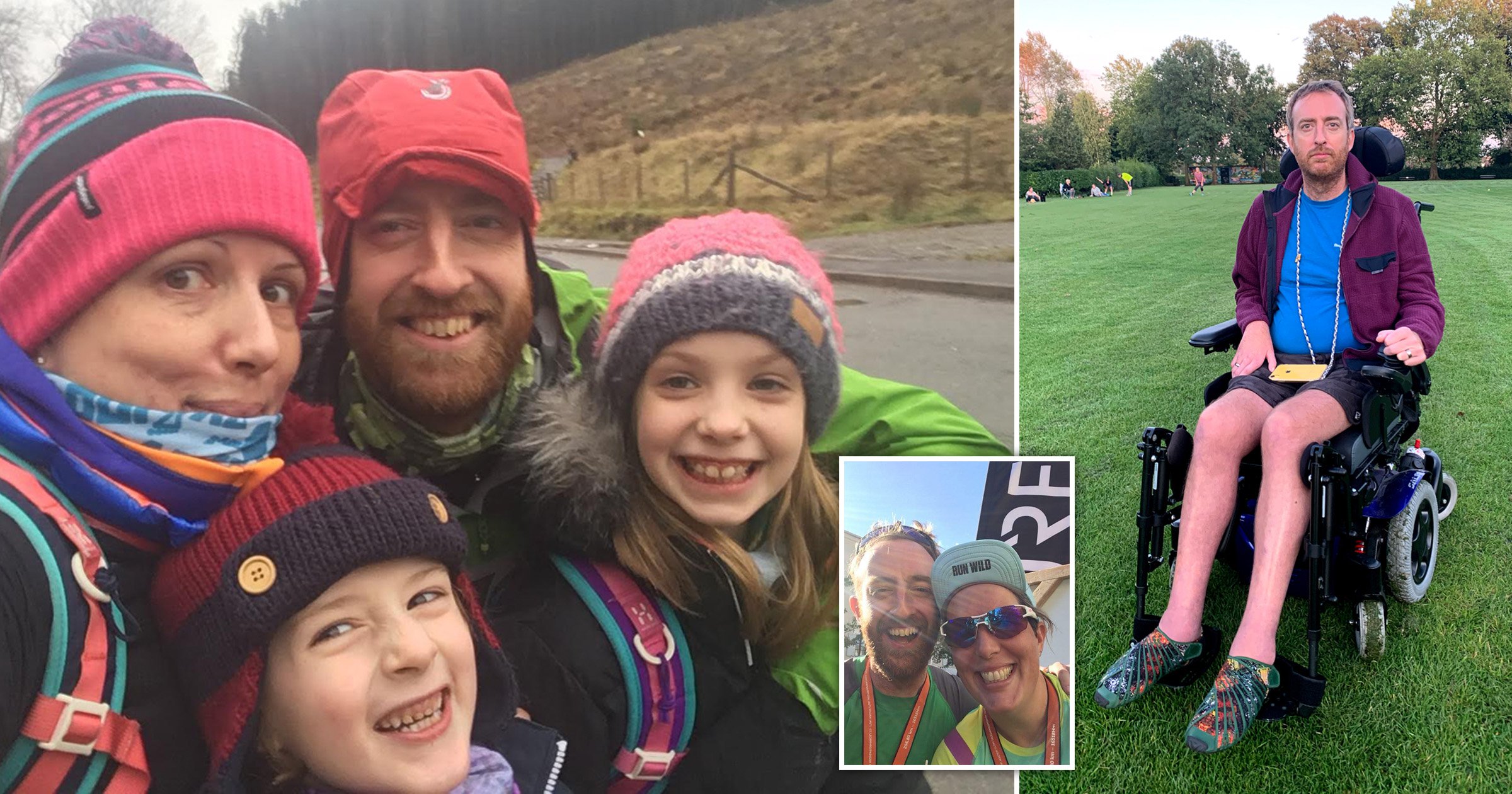 Dad-of-two Alex Francis was used to running 70 miles a week and was training for a gruelling seven-day race across the Alps when he first noticed something was wrong.

His wife and partner for the race Laura, 44, was getting better the more they trained but Alex’s progress seemed to be static.

Alex, also 44, completed five of the seven days and they said they would try again the following year.

But soon after the race in September 2018, software engineer Alex started suffering unusual symptoms, like tripping and falling for no reason, and he could not raise the toes of his right foot from the ground without lifting the whole thing.

His colleagues also noticed his foot making a ‘funny slapping noise’ when he walked.

In May 2019 the couple, who have two children, Lois, 12, and Jago, 10, received the devastating news that Alex had amyotrophic lateral sclerosis (ALS) – a common form of the neurological disorder motor neurone disease (MND) – which carries an average life expectancy of two years.

Laura, now Alex’s primary carer, of Frome, Somerset, said: ‘I realised that the future we believed we had to look forward to, together and with the kids, had just been wiped out. The doctor had told us, “There is no treatment, there is no cure, there is nothing we can do for you.”‘

According to the National Institute for Neurological Disorders and Stroke (NINDS), ALS damages the brain cells that control voluntary movement, triggering a rapid loss of muscle control followed, eventually, by paralysis.

As his disease progresses, Alex can expect to lose the ability to speak, eat, move and eventually breathe, which is why most sufferers eventually die from respiratory failure. There is no treatment, no cure and no explanation why it happens.

The path to diagnosis started soon after their last race together in the Alps.

Alex’s symptoms got worse and he had to pull out of an ultra-marathon a few months later in December and finally agreed to see a doctor.

‘Alex told the GP he couldn’t run as well as he used to. He then had lots of tests, but the doctor couldn’t find anything wrong,’ said Laura.

‘In fact, the doctor just told him he was really healthy thanks to all the training.’

But in the months that followed, his colleagues noticed him tripping over nothing and his foot making the slapping noise.

Alex went back to the doctor, who referred him to an orthopaedic foot specialist.

He was sent for an MRI scan, and the couple thought he might have a slipped disk or possibly multiple sclerosis.

They had considered MND but dismissed it because it is so rare.

But when the consultant got the results, he advised them to see a neurologist and offered to recommend one if they could afford to go privately, as the NHS wait was 16 weeks.

Laura said: ‘Our appointment was at 8.50am on a Monday morning in May 2019 at the clinic in Bath and by the time we got there, we were feeling pretty fragile.

‘The children knew Alex had a bad leg so we just told them we were going to see a doctor who we hoped would be able to fix it.

‘We still thought maybe he had MS. We have a couple of friends in their 40s who’ve been diagnosed, so we know you can live with MS and still have a pretty decent life. And, unlike MND, it’s not a death sentence.’

After watching Alex walk down the corridor and looking at the recent MRI scans, the neurologist delivered the devastating diagnosis.

Laura recalled: ‘He told us, “I am 99% certain you have motor neurone disease. I wouldn’t make this diagnosis if I wasn’t sure. No doctor ever wants to give this diagnosis.”

‘We were in complete shock.’

After speaking to a doctor friend, they decided to make the most of the time they had before Alex deteriorated further, planning to take off in their camper van with the children, while he was still mobile enough to enjoy the adventure.

He had always wanted to travel to Italy, so, with the blessing of his doctors, his bosses and the teachers at the children’s school, on June 14, 2019, the family took the ferry to France and drove down to Italy to start a three-month long trip.

When they left, Alex could walk with the support of walking poles, but by the end he struggled to get back up off the floor after practising yoga stretches.

After returning home, they faced a barrage of medical appointments, occupational therapy and making changes to their three-storey townhouse, so he could still get upstairs.

‘One of the things people don’t realise with MND is that everything is in a state of constant change,’ said Laura.

‘Alex said to me, “Just as soon as you get used to things being one way, everything changes,” and he’s right. His needs keep changing so everything is under constant review.’

Now two years on, Alex has full-time carers, as well as Laura. He cannot dress or feed himself and the only movements he can now control are those made by his head.

They are now fundraising £50,000 to add a ground floor extension to their house, allowing Alex to stay living there as long as possible.

Alex can no longer manage the stairlift to get upstairs in their house so the need for a ground floor extension is becoming increasingly urgent.

They are also telling their story to raise awareness of MND and ALS – illustrating how it can strike anyone – healthy or otherwise.

‘I speak to other patients on the online support groups, so I know there are people with this condition who are suffering a lot more than me,’ said Alex.

‘I want that to change. I want to share the ways I am finding meaning in my life now, but I also want researchers to get the funding they need, so other families won’t suffer the way ours has.

‘There are new treatments just around the corner, but we need more research investment.

‘After my diagnosis, at first I thought, “Ok, well there must be something we can do.”

‘But, by the time we got to our car in the car park I realised our lives had changed forever and a wave of grief came over me.

‘The doctor had told us, there was no treatment, no cure, but with more research, surely that can change.’

Get in touch at [email protected]