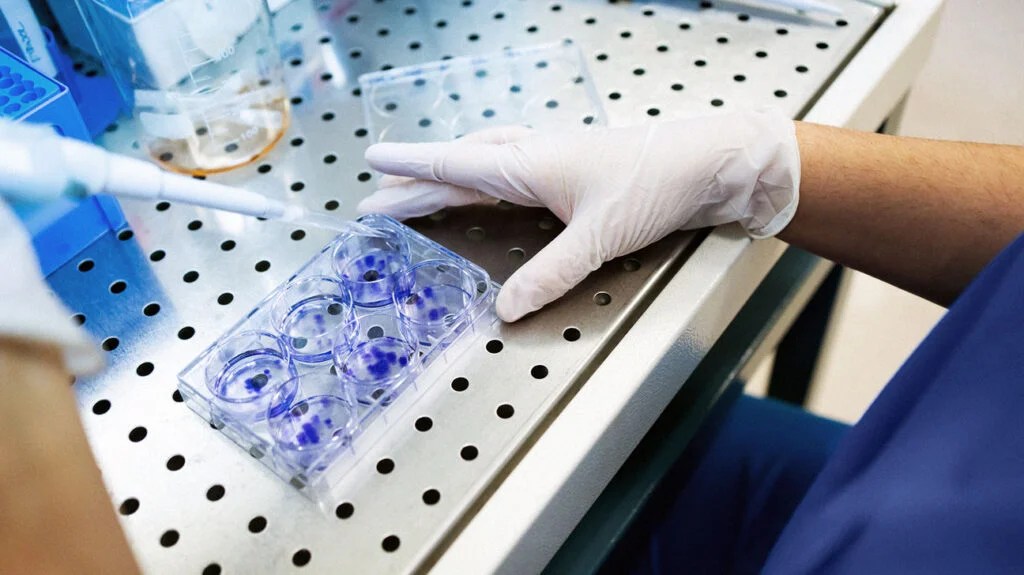 Multiple myeloma is a cancer of plasma cells. These cells, made in the bone marrow, are a vital part of the immune system. The disease, which affects around one in 132 people in the United States, is rarely diagnosed in people under the age of 65.

The myeloma cancer cells also build up in the bone marrow and form tumors.

The abnormal plasma cells are made from stem cells in the bone marrow. As their number increases, the number of red blood cells, white blood cells and platelets, which are made from the same type of stem cell, decreases.

Initial treatment for multiple myeloma may involve chemotherapy, immunotherapy, and corticosteroid treatment. Some people may then receive a stem cell transplant, using their own or donor cells, to help them manufacture healthy blood cells.

Other treatments target the symptoms to improve the patient’s quality of life. Doctors can treat and control the disease, but it is currently regarded as not curable. If myeloma stops responding to treatment, it is called refractory myeloma.

Now, trials of talquetamab have shown very promising results in people with refractory myeloma. Following treatment with the immunotherapy drug in the Mount Sinai Health System trial, almost three-quarters of the participants showed improvement, with 30% having a complete response to the drug.

The results of the phase 1 trial appeared in the New England Journal of Medicine, and the phase 2 trial results were presented at the annual meeting of the American Society of Hematology.

Talquetamab is a bispecific antibody, a type of monoclonal antibody that redirects T cells to act against myeloma cells.

Dr. Ajai Chari, director of clinical research in the Multiple Myeloma Program at The Tisch Cancer Institute and lead author of both studies, explained for Medical News Today how it works:

Dr. Baker was cautiously optimistic about the therapy: “Talquetamab sticks to both cancer-killing immune cells and myeloma cells, helping the immune system to recognize and destroy the cancer. It’s encouraging to see results from trials which indicate that talquetamab could be used to treat myeloma, but further studies are needed before it can be used in the clinic.”

In the phase 1 trial, 232 patients with relapsed or refractory myeloma were given talquetamab. They were divided into two groups, one of which received the drug intravenously, and the other subcutaneously.

The drug produced a substantial response, with only low-grade side effects, in 70% of the patients.

Dr. Chari explained: “Myeloma response means […] there’s a 50% reduction in the myeloma level, so if it’s less than 50% it is not considered a response and when you submit to the [Food and Drug Administration], and when they look at regulatory approval, it’s 50% or higher. Anything less doesn’t count.”

“These are patients who’ve had typically five lines of therapy over several years. They’ve exhausted many available therapies […]. These aren’t people with many options remaining, so in that setting 50% improvement is fantastic,” he added.

In the phase 2 trial, doctors administered all the treatments subcutaneously using doses that had been safe and successful in the phase 1 trial. Of the 288 patients in this trial, 143 received a single dose of the drug weekly, and 145 received a double dose every 2 weeks.

Over the course of the trial, 73% of patients responded positively to the drug. Of these, more than 30% had a complete response, meaning that, following treatment, the researchers could detect no myeloma-specific markers. Nearly 60% had a “very good partial response,” meaning that their cancer was substantially reduced.

Dr. Chari explained: “A complete response isn’t actually a cure but it’s basically getting it down to a level where it’s undetectable. Many of those with a very good partial response had a 90% improvement.”

He told MNT that phase 3 trials are now underway using a the 2-weekly dosing pattern. This is more convenient for patients and, Dr. Chari added, in the phase 2 trial there was a “hint of more durable remissions in the 2-weekly.”

“Future trials should see if talquetamab’s specific targeting of myeloma could allow more patients to benefit from treatment, especially when combined with other drugs. These trials could give people with myeloma the chance to live longer by keeping their cancer at bay.”

“What’s exciting is these are patients who are in their late 60s that have had so many prior therapies we wouldn’t even think that their immune cells would work very well because they’ve been so beaten up by all of these treatments. And here we’re seeing responses of like 70 to 100%. […] [I]t really is a game-changing paradigm,” said Dr. Chari.

The 73% response rate in this study is higher than that for most currently available therapies. So the researchers believe that talquetamab could offer a viable option for patients whose myeloma has stopped responding to other therapies.

“We need these off-the-shelf products because not everybody is going to go to large academic centre and go through the whole CAR-T and there’s great future for this. This is a whole new era of cancer therapy,” Dr. Chari said.