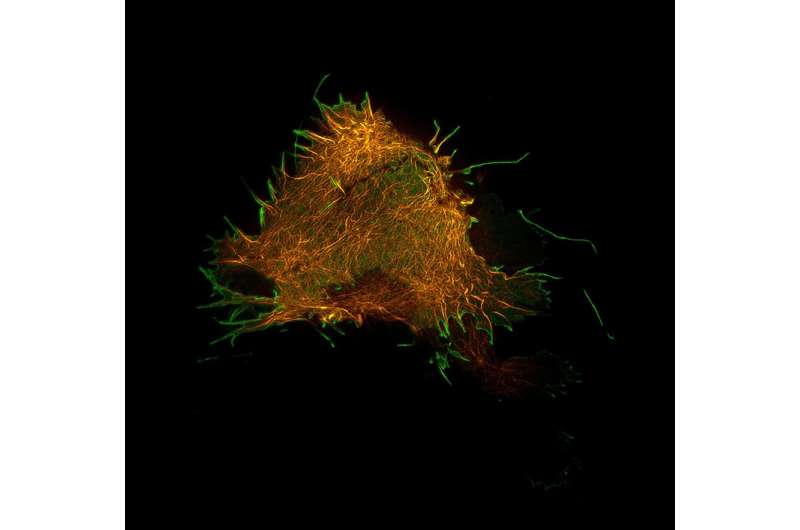 The Marburg virus, a relative of the Ebola virus, causes a serious, often-fatal hemorrhagic fever. Transmitted by the African fruit bat and by direct human-to-human contact, Marburg virus disease currently has no approved vaccine or antivirals to prevent or treat it.

A team of researchers is working to change that. In a new paper in the journal Antimicrobial Agents and Chemotherapy, investigators from Penn’s School of Veterinary Medicine, working together with scientists from the Fox Chase Chemical Diversity Center and the Texas Biomedical Research Institute, report encouraging results from tests of an experimental antiviral targeting Marburg virus. The compound blocks the virus from departing infected cells, thus putting the brakes on the spread of infection. Their findings are the first to show that this novel class of inhibitors can be effective against the infection in an animal model.

In addition, due to possible similarities in virus-host interactions between Marburg and SARS-CoV-2, the team has conducted experiments on the culprit behind the coronavirus pandemic. While preliminary and thus-far-unpublished, their initial tests show signs of promise.

“It really is exciting,” says Ronald Harty, a co-corresponding author of the research and a professor at Penn Vet. “These viruses are quite different but may be interacting with the same host proteins to control efficient egress and spread, so our inhibitors may be able to block them both.”

While many antivirals target the virus itself, the drug candidates that Harty and colleagues have been developing for years are known as “host-oriented.” They prevent virus-host interactions by blocking the proteins in host cells that viruses hijack during late stages of infection.

Not only does this approach help avoid the likelihood that a virus would evolve to resist such a therapy, but it also increases the chance that a drug could be used against multiple viruses, as many rely on the same host cell machinery to reproduce and spread.

The Marburg and Ebola viruses use the VP40 protein to interact with a host protein called Nedd4 to complete the process of “budding” off a host cell. This stage of infection, which is key to viral spread, is the one the research team has targeted.

In previous studies, they had tested a variety of small molecule inhibitors of this process using laboratory tests that relied on non-infectious and more-benign viral models. Those assays helped them land on a leading candidate, FC-10696, for further study.

In the current work, they zeroed in on this candidate with rigorous evaluations. First, they tested the inhibitor to ensure it would be safe and retained long enough in the body to have an effect. Next, because the live Marburg virus is too dangerous to study safely in anything but a Biosafety Level 4 (BSL-4) laboratory, they used an assay to look at what are known as virus-like particles, or VLPs, which can bud off of a host cell like the live virus but are not infectious.

Using the Biosafety Level 2 laboratory at Penn, “it’s a very quick way we can test these inhibitors,” Harty says.

After seeing a dose-dependent response to FC-10696 on VLP budding in cells in a cell-culture dish, the researchers tested the compound using the real Marburg virus. These studies were done in a BSL-4 lab at Texas Biomedical Research Institute and found the compound inhibited the budding and spread of live Marburg virus in two human cell types, including in macrophages, an immune cell type commonly infected by the virus.

Finally, they evaluated the compound in mice that had been exposed to Marburg virus. Those mice treated with FC-10696 took longer to display disease symptoms and had a reduced viral load.

“These are the first promising in vivo data for our compounds,” Harty says. “Whereas the control group all became sick very quickly and died, with the treated animals there was one survivor and others showed delayed onset of clinical symptoms. It’s showing that our inhibitors are having an effect.”

A portion of the VP40 protein in Marburg and Ebola viruses that enables budding is known as a PPxY motif. SARS-CoV-2 also happens to have this motif on its Spike (S) protein, which it uses to infect human cells. In a follow-up experiment that is not yet published, the researchers found evidence that FC-10696 was able to inhibit budding of the SARS-CoV-2 coronavirus in human lung epithelial cells.