Pity Pope Francis. When video footage emerged last month of him repeatedly pulling his right hand away as worshipper after worshipper moved forward from a long queue to kiss his ring, conservatives blasted him for disrespecting church tradition. The Pope later explained he was simply trying to reduce the risk of his flock picking up germs on the ring.

We've been going nuts over germs in recent months. There was the UK study revealing that McDonald's touch screen kiosks contain – erky perky – gut and faecal bacteria, which followed another study of 1000 Brits that found smartphones harbour more bacteria than toilet seats. Earlier studies have shown that treadmills and free weights in gyms, and tray tables, head-rests and toilet door handles on airplanes, are home to vast colonies of bacteria and viruses. 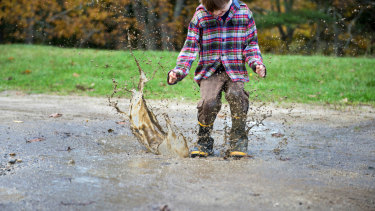 Getting children to muck around in mud can have lifelong benefits for their immune system.Credit:Stocksy

Meanwhile, we've been told that we live in an over-sanitised world, that we're not giving our kids enough dirty outdoor play, which exposes them to a diverse range of "friendly" microbes that help train their immune system to resist nasty pathogens in later life.

So which is right? Both, say microbiologists. We now know that asthma, allergies and auto-immune diseases are much more common in children in cities than country areas, where they're more exposed to the outdoors and animals. US studies have shown that pets carry microbes into the home that help prime the immune system to better resist assaults from harmful bacteria and viruses.

"Dirty can be healthy – it teaches our immune systems about the good guys and the bad guys," says Nick Coleman, an associate professor of microbiology at the University of Sydney. "We're surrounded by billions of bacteria every day, and only a vanishingly tiny percentage are harmful."

Coleman says that the scientific consensus is now on "targeted" hygiene. In other words, teach your kids to wash their hands after going to the loo, but let them play with mud pies in the backyard, where they'll likely encounter lots of "old friends" – harmless micro-organisms that have existed since the dawn of human evolution – to help fortify their immune systems.

And for adults? You could start by scrubbing the chopping board and washing your own hands after handling raw chicken. And yes, Coleman says, also wash your hands after using a McDonald's touch screen.

To read more from Good Weekend magazine, visit our page at The Sydney Morning Herald, The Age and Brisbane Times

Related posts:
Tags: being, Can, clean, dirt, harm, Health, on, squeaky, the, Why, Your
Medications
Health Problems