Caleb Spiro traces it all back to bullying.

“I was bullied for many years in middle school and high school and I often felt very alone with how I felt,” he says.

As a teen, Caleb had a dream of being the best athlete in lacrosse, and wanted to work really hard at achieving that goal. But while Caleb ran around his school track during P.E., he’d hear kids taunting him, yelling, “try hard” sarcastically from under the bleachers.

“The intensity of running paired with the intensity of being bullied really made my heart race, and every second I just wanted to quit and cry and run away,” he says.

The bullying got worse. Kids would beat him up during lacrosse practice, hitting him with their sticks and kicking him.

At home, Spiro says he felt like it wasn’t okay for him to be sad. “Within my family and from what I saw in television, movies, and books, men don’t cry,” he says. “They rarely express how they are feeling unless its anger or frustration or being happy. So I knew I was sad, but I didn’t have the vocabulary or knowledge to know that I was depressed.”

The Catalyst for Change

One day, when he was 15, he sat on a bench near his house in the pouring rain. He was struggling with feeling like he was a good kid. He sat there and asked himself, “Why me?” over and over again.

Spiro was into inspirational quotes at the time, and had found one from Steve Jobs that popped into his head while on the bench. “It goes something like, ‘You can’t connect the dots looking forward; you can only connect them looking backwards,” Spiro says.

“I was tired of drowning in my own self-pity and that quote made me realize that although it wasn’t my fault for feeling depressed, it was ultimately my responsibility for getting better,” Spiro says. It inspired Spiro to want to make a change. 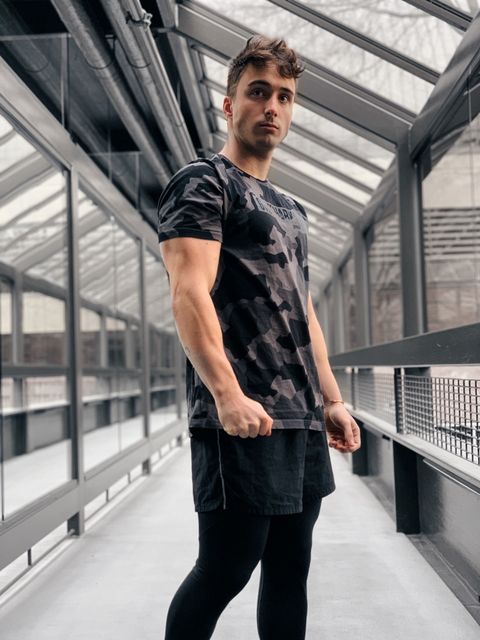 While other kids were partying on the weekends, Spiro spent them reading about nutrition and fitness, and deciding what his beliefs would be. His first goal was to be less focused on his body and more focused on his mental health.

“My [body] goals were to have a six-pack, big arms, big chest … just the typical ‘bro gainz’ mentality. I wanted to look like a bodybuilder,” he says, “but I learned over time that it takes a while to get there.”

Spiro realized that obsessing over it for a week or even a month made him think he wasn’t doing enough. But reminding himself of his focus on mental health, and his long-term body goals, kept him consistent.

Even though Spiro gave up on his lacrosse goals because of the bullying, he stuck to his goals, putting on 30 pounds of muscle in 5 years. “I weighed 145 then and I weight 175 now, with the same body fat percentage,” he says.

Now, Spiro recognizes that consistency can be tough when you’re starting out. “Building a fitness routine is hard because it means really confronting core beliefs that we hold about ourselves about what we can and can’t do,” he says. But it’s challenging that belief that helped Caleb transform his mental health.

“When I learned to slowly push those limits, I learned that I could apply that method to everything else in my life. My whole life has elevated, countless times over. Fitness didn’t just change my life, it saved it really.”

Spiro made a promise to himself on that bench in high school that he would use his struggle with depression to help others. Now, Spiro, 21, is a certified personal trainer and is applying to grad school for clinical psychology.

He’s also learned to embrace his more emotional side. “I have learned that vulnerability is strength not a weakness.”