Training for your first marathon can be just as good for your blood pressure as drugs by ‘reversing’ the ageing of blood vessels, a study found.

The reduction of four years of age-related artery stiffness could reduce the risk of stroke by up to 10 per cent over a person’s lifetime, scientists said.

They tracked people who ran 13 miles a week for six months and found those who were older or slower gained the greatest health boost.

As we age, blood vessels stiffen which increases the risk of stroke and heart disease even in healthy people.

But compared to their peers, lifelong athletes have biologically younger blood vessels. 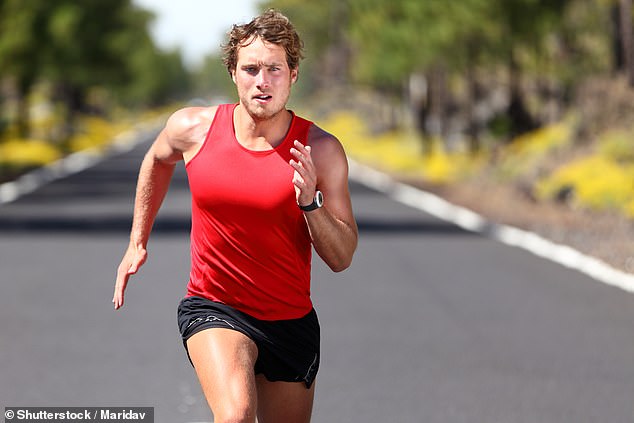 University College London researchers investigated whether training for the London Marathon could modify aortic stiffness even in novice runners.

‘This is comparable to the effect of medication and, if maintained, translates to approximately 10 per cent lower risk of stroke over a lifetime.

‘You don’t have to be an elite athlete to gain the benefits from marathon running. In fact the benefits appeared greatest in those who were older and slower.

‘By completing training, and getting to the finish line, it is possible to rejuvenate the cardiovascular system of first-time marathon runners.’

The study involved 139 healthy first-time marathon runners aged 21 to 69 years who were advised to follow a first-time finisher training programme.

HOW CAN YOU PREVENT A STROKE?

The best way to help prevent a stroke is to eat a healthy diet, exercise regularly, and avoid smoking and drinking too much alcohol.

These lifestyle changes can reduce your risk of problems like:

An unhealthy diet can increase your chances of having a stroke because it may lead to an increase in your blood pressure and cholesterol levels.

A low-fat, high-fibre diet is usually recommended, including plenty of fresh fruit and vegetables (5 A Day) and wholegrains.

You should limit the amount of salt you eat to no more than 6g (0.2oz) a day as too much salt will increase your blood pressure: 6g of salt is about 1 teaspoonful.

Regular exercise can maintain a healthy weight and help lower your cholesterol and keep your blood pressure healthy.

For most people, at least 150 minutes (2 hours and 30 minutes) of moderate-intensity aerobic activity, such as cycling or fast walking, every week is recommended.

Smoking significantly increases your risk of having a stroke. This is because it narrows your arteries and makes your blood more likely to clot.

Cut back on alcohol

Excessive alcohol consumption can lead to high blood pressure and trigger an irregular heartbeat (atrial fibrillation), both of which can increase your risk of having a stroke.

Because alcoholic drinks are high in calories, they also cause weight gain. Heavy drinking multiplies the risk of stroke by more than 3 times

Before they started training and two weeks after completing the marathons, they had MRI and ultrasound scans of the heart and blood vessels, a fitness test, and measurements of blood pressure and heart rate.

Biological age of the aorta, the largest vessel in the body in the heart, was calculated at both time points.

After completing the marathons, aortic stiffness had reduced and the aorta appeared four years younger than before training.

Older participants and those with longer marathon finish times had greater reductions in aortic stiffness after training.

The reductions in aortic stiffness were independent of changes in blood pressure.

Dr Bhuva added: ‘The minimal impact on these conventional markers of health suggests that study participants trained within their personal limits.

He said that before the marathon training most participants ran less than two hours a week and their finish times were slower than average, which was expected as it was their first race.

And Dr Bhuva added: ‘The study shows that the health gains of lifelong exercise start to appear after a relatively brief training programme.

‘Training for a marathon can be a good motivator to keep active.

‘Many people enjoy it and continue running, which should increase the likelihood of sustaining the benefits.’

Professor Sanjay Sharma, medical director of the London Marathon and an author of the study, said: ‘The benefits of exercise on the heart and circulation are well established, and are associated with lower cardiovascular disease and mortality.

‘Recent studies have shown that exercise may retard ageing of the cardiovascular system.

‘Our study shows that a first-time marathon makes the cardiovascular system “younger” therefore participants will reap these benefits whilst running for a good cause.’

The findings were presented at EuroCMR 2019, a scientific congress of the European Society of Cardiology (ESC) in Venice.