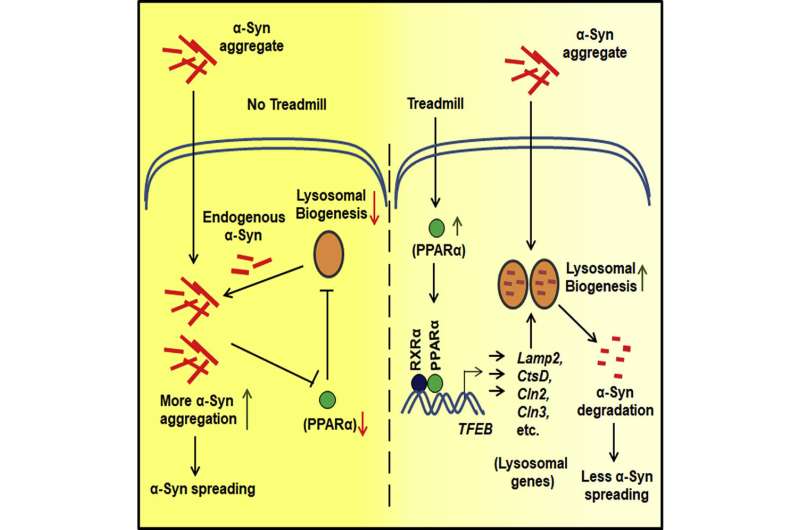 Regular treadmill exercise helped improve Parkinson’s disease symptoms in mice in a recent study by researchers at RUSH University Medical Center. The results of the study were recently published in the Cell Reports.

“We’re very excited about the results,” said Kalipada Pahan, Ph.D., Floyd A. Davis, MD, Endowed Chair in Neurology and professor of neurological sciences, biochemistry, pharmacology at the RUSH University Medical Center. “Our hope is that we can use this as a jumping off point for furthering our ability to help Parkinson’s patients manage their symptoms.”

In the study, scientists found positive results in using regular treadmill exercise to stop the spread of the α-synuclein protein and reverse biochemical, cellular, and anatomical changes that occur in the brains of mice with Parkinson’s disease in the absence of any drugs. The mice in the trial ran on a treadmill consistently in 30-minute intervals for six days a week, over the course of two months.

The findings are key in the ongoing research of Parkinson’s, but Pahan and his team were quick to note that while treadmill exercise is something that can be easily available and accessible, some patients with Parkinson’s might not be able to run on a treadmill daily.

The team then worked to identify a drug that could be useful in the absence of a treadmill in order to provide a variety of options to those experiencing Parkinson’s symptoms. Historically, available treatment for the disease is often associated with a number of side effects and unsatisfactory outcomes.

“Once patients are diagnosed with these neurodegenerative disorders, there are no drugs available for halting the disease progression,” Pahan said. “Understanding how the treadmill helps the brain is important to developing treadmill-associated drugs that can inhibit α-synuclein pathology, protect the brain, and stop the progression of Lewy body diseases.”

Fenofibrate mimicking the effects of a treadmill

The research team learned that fenofibrate, known as Triglide or Antara in the clinic, mimicked the effects of a treadmill workout in the brain. The drug is typically used to lower high cholesterol and triglyceride in patients.

“If taking fenofibrate can replicate the same effects of running on a treadmill then it would be a notable advance in the treatment of these devastating neurological disorders,” Pahan said.

The study found that fenofibrate activated PPARα within the brain, which is a key component to the success of the treadmill exercise routine. The team concluded that taking a low dose of fenofibrate daily slows the spread of α-synuclein in the brain and protects dopamine in mice in the absence of any treadmill workout.

Pahan and his team also noted that the mice who benefited from this study already had the PPARa protein that is associated with Parkinson’s.

The team is hopeful that these new findings will be used as a way to mitigate and improve Parkinson’s symptoms as well as a be used as preventive measure.