Miracle twins given a ten per cent chance of survival have celebrated their first birthday after having surgery while they were still in the womb.

Sherrie Foulger, 32, and her fiancé Craig Armstrong, 30, were told their babies had twin-to-twin transfusion syndrome (TTTS) at a 16 week scan.

The condition causes one twin to receive more blood than the other, and doctors warned the babies were unlikely to survive the pregnancy.

The only option was a risky surgery which could have left either one, or both of the boys, Roma and Reeve Armstrong, brain damaged.

Surgeons wheeled Miss Foulger in for the pioneering operation when she was  21 weeks pregnant.

After being born naturally at 29 weeks, the boys, from Ilkeston, Derbyshire, have suffered no long-term health complications. 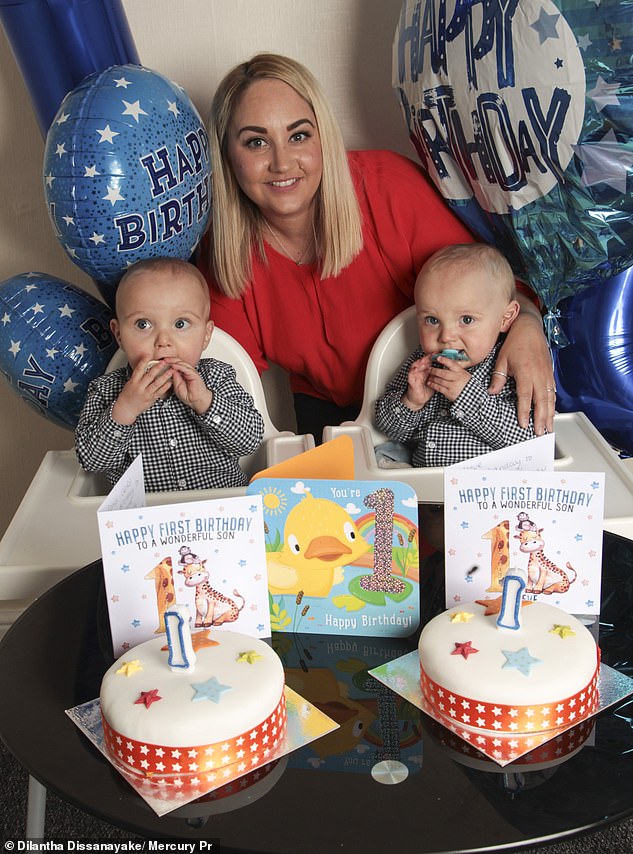 Roma and Reeve Armstrong, given a ten per cent chance of survival, have celebrated their first birthday after having surgery while they were still in the womb. Pictured with their mother, Sherrie Foulger, 33, at their home in Ilkeston, Devon 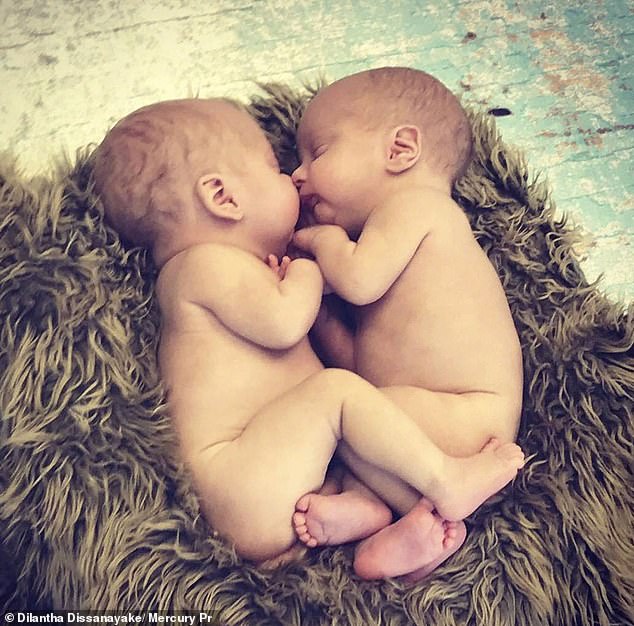 The babies were discovered to have twin-to-twin transfusion syndrome at the 16-week scan. Pictured as newborns 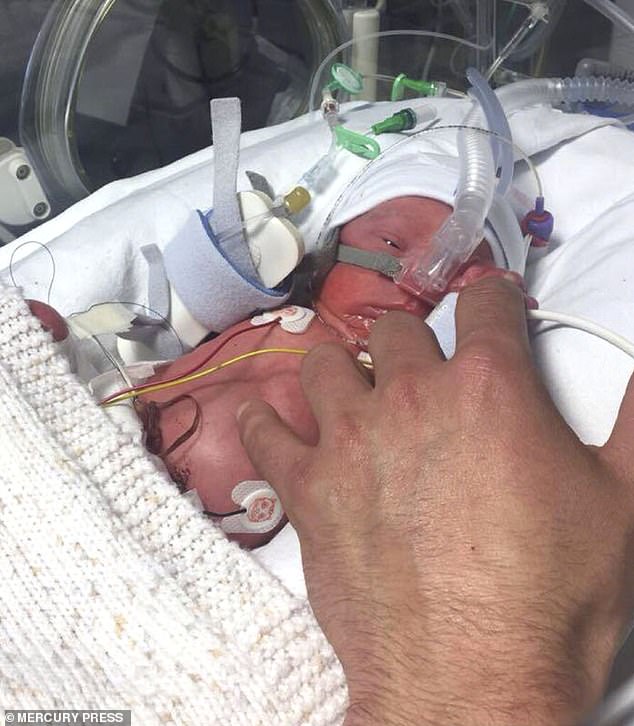 The babies were born premature at 29 weeks in April 2018, needing to be in intensive care for 40 days. Pictured, Roma 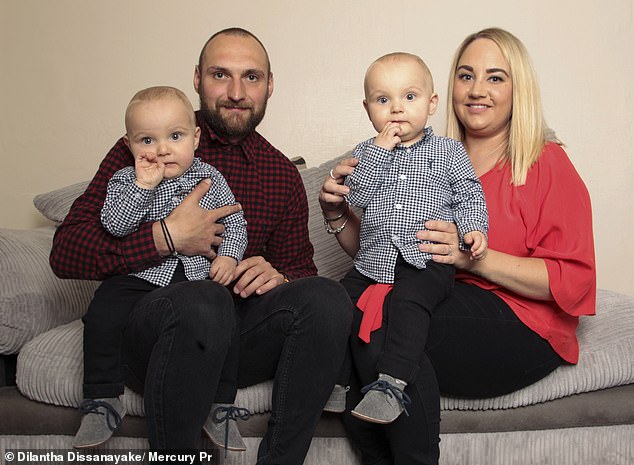 Cargo worker Miss Foulger and her fiancé Craig Armstrong, 30, were distraught to hear that even with surgery to save the twins, they could be brain damaged. But they have suffered no long-term health implications. Pictured on their first birthday

Cargo worker Miss Foulger, who has two children Theo Francis, 12, and Troy Francis, eight, from a previous relationship, said: ‘We never thought we’d get to the point we’re at now.

‘We’d go for weekly scans and I’d be so anxious not knowing if they would be alive or dead.

‘Now the boys are thriving. They’re crawling around and holding themselves up and eating well.’

At her 16 week scan, Miss Foulger and Mr Armstrong, a groundworker, found out the twins had TTTS.

The condition occurs in around 15 per cent of monochorionic diamniotic (MCDA) twins – identical twins that share the placenta which account for around two thirds of identical twins, according to the NHS.

It causes abnormal blood vessel connections to form in the placenta and prevent blood from flowing evenly between the babies.

Diverted blood flow from one ‘donor’ twin goes to to the other ‘recipient’ twin.

This leads to an enlarged bladder and excessive amounts of amniotic fluid, and in most cases, one twin becomes dehydrated, which affects its growth, and the other develops high blood pressure which can lead to heart failure.

Miss Foulger said: ‘It broke my heart when they told me they had it. It absolutely petrified me. 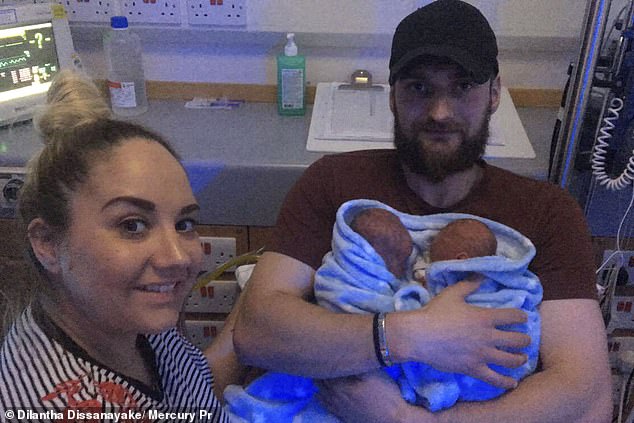 While in the womb, surgeons performed pioneering but risky laser ablation surgery, which involves finding the blood vessels connecting the twins and closing them off to help the blood flow evenly. Pictured, the couple holding the twins in ICU after birth 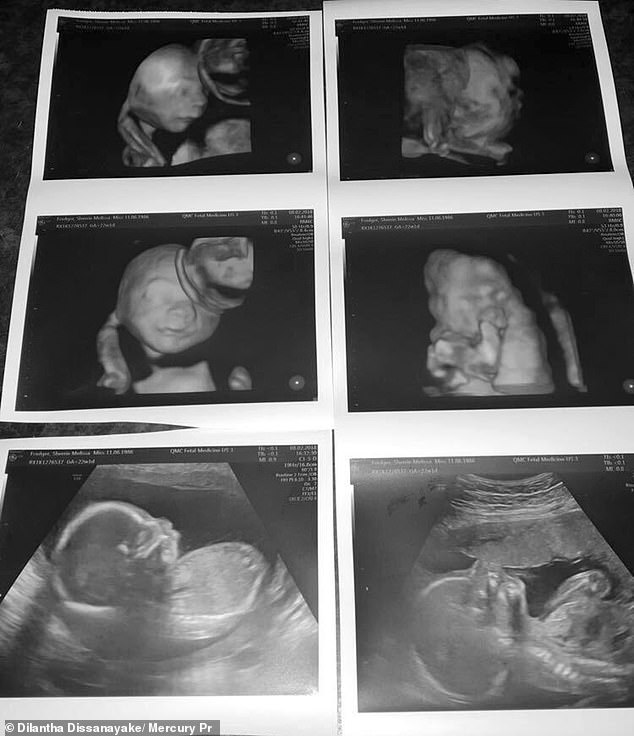 At her 16 week scan, Miss Foulger and Mr Armstrong found out the twins had TTTS, a condition occurring in around 15 per cent of monochorionic diamniotic (MCDA) twins. (Pictured, scans) 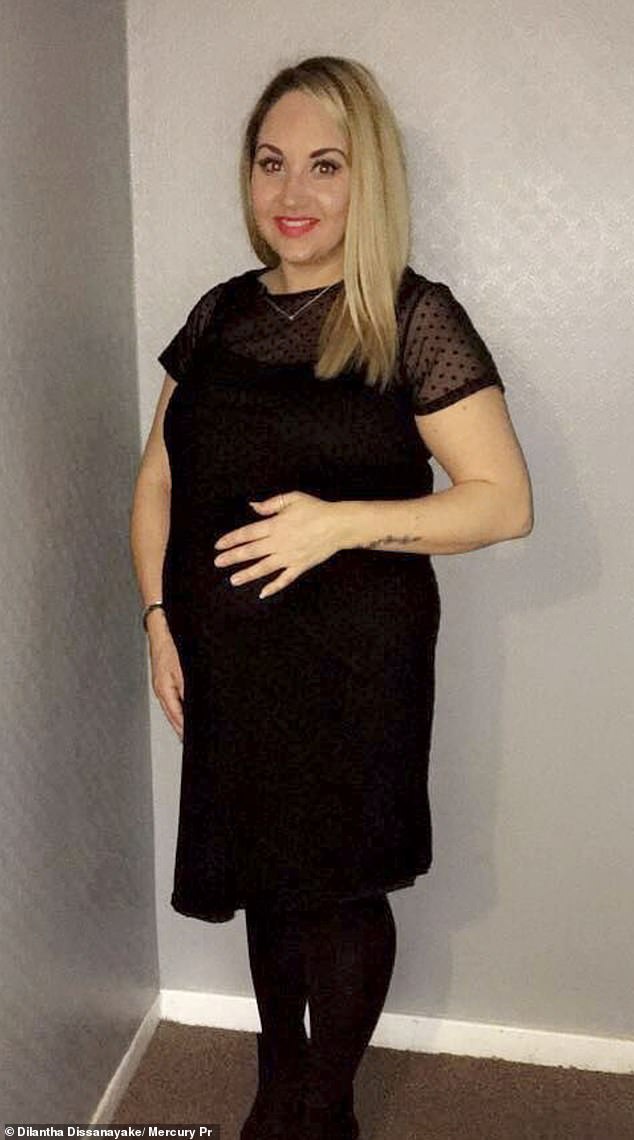 Miss Foulger, pictured during pregnancy, broke down upon the diagnosis of TTTS 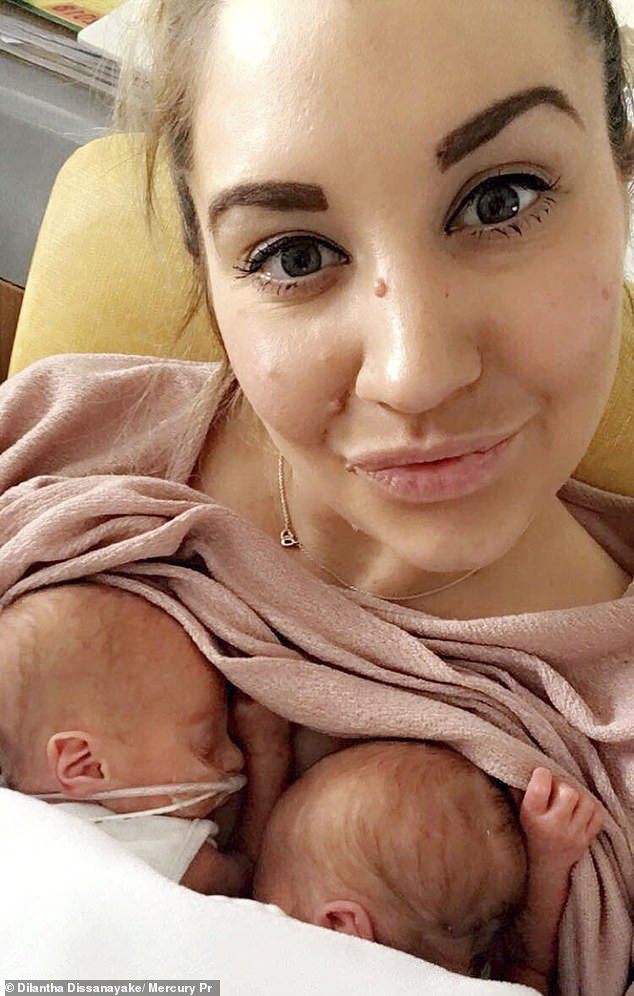 Six days after their birth, Miss Foulger was able to cuddle both her babies

WHAT IS LASER SURGERY FOR TWIN-TO-TWIN TRANSFUSION SYNDROME?

In complicated cases of twin-to-twin transfusion syndrome (TTTS), surgery can offer the best chance of having two healthy babies.

Laser ablation surgery delivers laser energy that seals off the blood vessels on the surface of the shared placenta that is allowing for blood flow to be shared.

Because the vascular connections between the two fetuses are sealed, no further blood exchange between the foetuses takes place.

Most surgeries are performed under local anesthesia. A small incision (3mm) will be made and a trocar (small metal tube) will be inserted into the amniotic sac of the recipient twin.

An endoscope (medical telescope) will be passed into the uterus. The blood vessels, which are visible on the surface of the placenta, will be analysed, and all communicating vessels will be sealed off with laser energy.

The excess amniotic fluid may be drained from the sac of the recipient twin.

Pregnancy outcomes after laser therapy for TTTS is as follows: approximately 85 per cent of patients will have at least one foetus survive, 50 per cent will have both survive, with a five per cent risk of a disorder of the nervous system such as cerebral palsy.

NICE has said that this procedure is safe enough and works well enough for use in the NHS.

‘We read up on it and all you think is “I’m going to lose my babies”.

Around 300 twins die from the condition every year in the UK, while 6,000 babies are affected annually in the US.

At 18 weeks pregnant the couple were referred to a top consultant at Birmingham Women’s Hospital and, at 21 weeks, medics discovered the fluid around Roma was 11cm while Reeve’s was below one centimetre.

This meant Roma’s heart was struggling and the only option was pioneering but risky laser ablation surgery.

The surgery, routine for TTTS babies on the NHS, involves finding the blood vessels connecting the twins and closing them off to help the blood flow evenly.

Miss Foulger said: ‘Even if they did survive there was a possibility they would have been starved of oxygen and end up brain damaged.

‘I had local anaesthetic and was awake the whole time with Craig beside me.

‘I’d never seen so many doctors. There were about 35 people in the room while it was happening.

‘It’s an amazing thing medics do. They drained two litres of fluid.’

A week later Miss Foulger had a 4D scan and an MRI scan to identify if there was any brain damage to either twin, but thankfully both were fine and arrangements were made for delivery at 32 weeks.

However, at 29 weeks and four days, Miss Foulger’s waters broke, as babies with TTTS are often born premature.

Both babies had an oxygen mask to help them breath and feeding tubes. They were also given umbilical venous catheters, a tube going into their umbilical cord that allows fluids and medicines to be given without having to frequently replace an intravenous (IV) line. 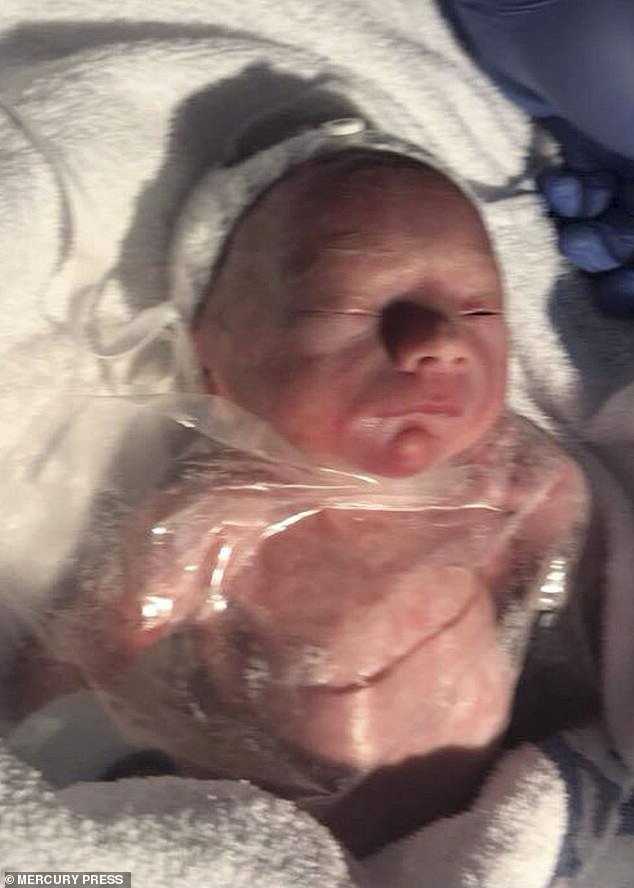 After birth, both babies had an oxygen mask to help them breath, feeding tubes and umbilical venous catheters, a tube going into their umbilical cord that allows fluids and medicines to be given. Pictured, Roma in ICU 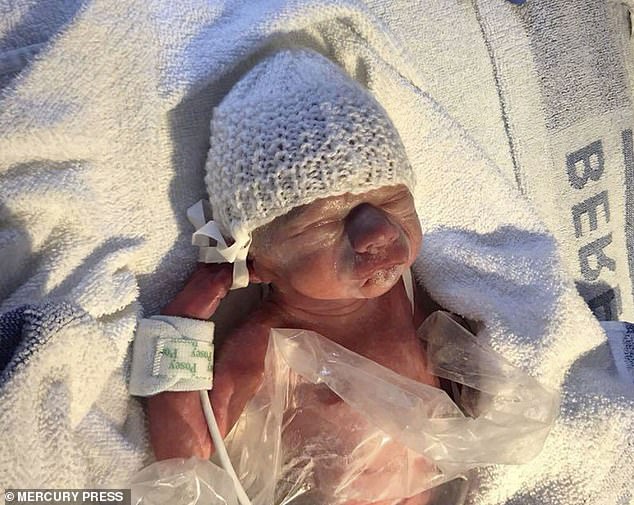 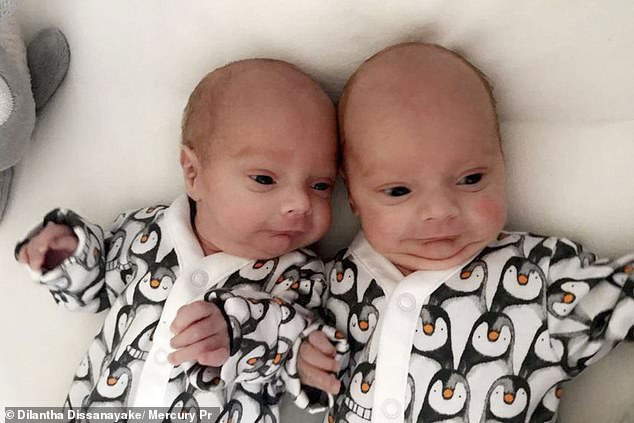 Miss Foulger said it’s amazing what medics can do after initially being convinced she would lose her twins. Pictured as newborns 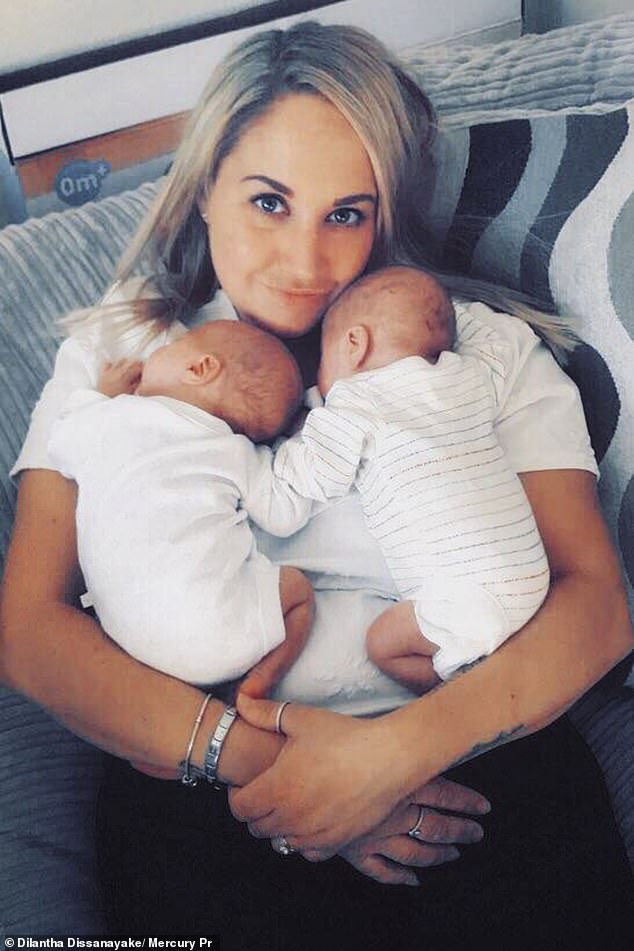 Miss Foulger, pictured at home with her newborn babies, said: ‘It felt like the best thing holding them both. I’d sit there for hours not moving. I wouldn’t put them down’

Miss Foulger said: ‘When they were born, they were whisked off and taken to the neo-natal intensive care unit.

‘They lifted them up to show us their faces but we weren’t allowed to hold them.

‘It was such a mix of emotions. It felt like they came so quickly. We were happy they were alright but scared because we didn’t know what was going to happen.’

She added: ‘They looked so vulnerable with tubes coming out of them, we couldn’t do anything to help them.

‘Although Reeve was the smaller twin he’s always been stronger. I could hold Reeve after four days and Roma after five or six days, so then could have double cuddles.

‘It felt like the best thing holding them both. I’d sit there for hours not moving. I wouldn’t put them down.’

The twins spent 40 days at three different hospitals before being allowed home in May last year. 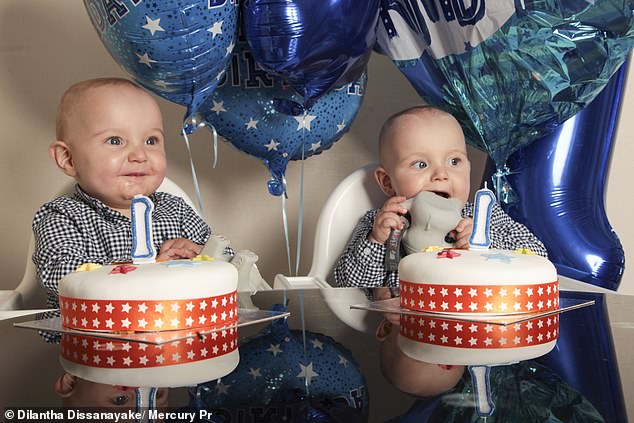 The twins spent 40 days at three different hospitals before being allowed home in May last year. Now, a year later, they are thriving 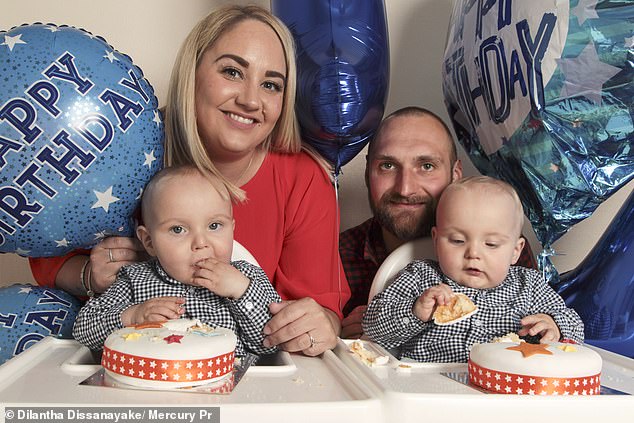 Miss Foulger said the bond between the babies is amazing. The family pictured together

The pair have since attracted 11,000 followers to their Instagram page, which Miss Foulger set up to create memories and help other parents going through the same thing.

Miss Foulger said: ‘I burst into tears when I first brought them home. I couldn’t believe it was happening – I was so overwhelmed with emotion.

‘First they’d had TTTS, then there was the laser surgery, then them being born prematurely – it felt like everything that could have happened had done so.

‘But we’ve been so lucky and blessed. Roma is really laid back and Reeve is the cheeky mischief maker.

‘They get on really well and light up when they see each other. It’s amazing the bond they have because of all they’ve been through.’

WHAT IS TWIN-TWIN TRANSFUSION SYNDROME?

Twin-twin transfusion syndrome is a rare but serious condition that can occur in identical pregnancies when twins share a placenta.

Abnormal blood vessel connections form in the placenta and prevent blood from flowing evenly between the babies.

One twin then becomes dehydrated, which affects its growth.

The other develops high blood pressure and produces too much urine.

This leads to an enlarged bladder and excessive amounts of amniotic fluid, which can put a strain on the twin’s heart, leading to heart failure.

Without treatment, TTTS can be fatal for both twins.

The condition occurs in about around 15 per cent of identical twins who share a placenta, according to the charity Tamba.

Around 300 twins die from the condition every year in the UK, while 6,000 babies are affected annually in the US.

If this is not enough, laser surgery is used to seal shut abnormal blood vessels and permanently disconnect them.

The surgeon then drains excess fluid.

Even when treated successfully, most TTTS babies are born premature.

However, the majority go on to have long, healthy lives.