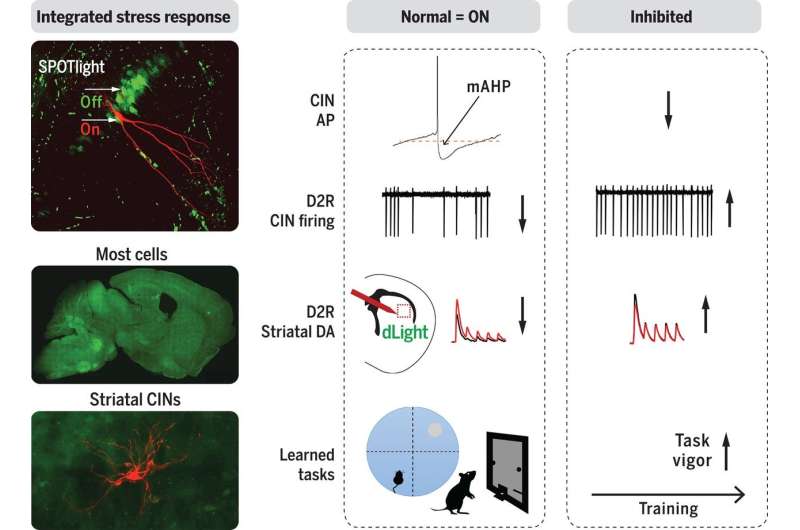 A team of researchers from Duke University Medical Center, the California Institute of Technology, the National Institute of Mental Health and Baylor College of Medicine has found via a new reporter that cholinergic neurons engage the integrated stress response (ISR) to modulate dopamine levels. In their paper published in the journal Science, the group describes their study of the ISR pathway using the new reporter and what they learned. Anna Ingebretson and Julia Lemos with the University of Minnesota have published a Perspectives piece in the same journal issue outlining current research involving striatal cholinergic interneurons and the work by the team on this new effort.

Prior research has shown that the dorsal striatum, situated in the basal ganglia, plays a role in planning, learning, movement, reward learning and the process of making and obtaining desired goals. The basal ganglia and its parts have been the target of much research in recent years because of its involvement in a wide range of activities and because it is believed problems with it are involved with a slew of major illnesses, including Parkinson’s disease, substance abuse and depression. In this new effort, the researchers sought to learn more about the dorsal striatum and the ISR—a signaling pathway that prior research has shown plays an important role in problems with homeostasis in the basal ganglia.

To gain a better perspective on the role of ISR, the researchers developed a two-color reporter they called SPOTlight aimed at reporting on ISR activation states. Its use involved creating a viral vector to make different kinds of neurons respond differently to different types of light in mice. It was used to translate red or green fluorescent proteins produced due to signaling in the brain.