Vaping death toll rises to 28: Panic over e-cigarette use across the US continues as cases of mysterious lung illnesses linked to the habit hit 1,300

Mysterious vaping illnesses have claimed the lives of 28 people in the US, and nearly 1,300 have severely damaged lungs from e-cigarette use, according to the latest Centers for Disease Control and Prevention (CDC) figures, released Thursday.

The federal agency has confirmed 26 deaths in 21 states, but 23 state health departments have reported the deaths of 28 people as of Thursday – numbers yet to be verified by the CDC.

Nonetheless, the CDC cautioned all Americans to ‘refrain from vaping’ in any form in its latest guidance, issued last week. 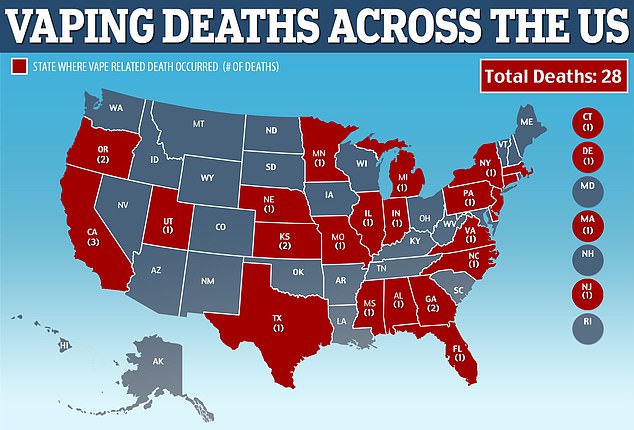 Additional vaping deaths have now been confirmed in Texas, Utah and Massachusetts, bringing the national toll to 28 fatalities across 23 states (red) in the US

One additional death has been reported each in Texas and Utah, and California and Georgia, bringing their respective death tolls to three and two.

It’s an alarming statistic that that fans driving a series of state attempts to keep the devices out of teens’ hands.

The lawsuit, filed late Tuesday evening, comes just  after a Bronx teenager’s death became the state’s first linked to the mysterious vaping illness that has struck over 1,000 Americans.

US health officials suspect that sweet flavors like ‘cotton candy’ and ‘mango’ entice children and teens to try e-cigarettes, leading them to get hooked on the highly-concentrated nicotine in the devices.

From there, teens may progress to vaping THC and other marijuana products, which seem to pose a greater danger.

It’s unclear how many of the sickened teenagers used THC, but 15 percent of the total illnesses reported are among people under 18.

For reasons that remain unclear, the lung illnesses have primarily stricken men, who account for 70 percent of the patients, according to the CDC.

Although President Trump announced plans to ban e-cigarettes last month, the federal government has yet to act to stop the steady stream of vaping-related illnesses and death spanning the US.

Three people have died in California and two in each Oregon, Georgia and Kansas.

In lieu of nationwide action, states are turning to local executive actions, bills quickly shuttled through their legislatures and legal actions through civil and criminal courts.

All of them are located outside New York.

The lawsuit accuses the companies of violating New York City law prohibiting the sale of e-cigarettes to people under 21 by marketing to underage consumers and failing to take adequate steps to verify their ages.

It seeks an order requiring them to comply with the law, and money damages ‘to compensate the city for the costs of abating the epidemic of underage e-cigarette use in the city.’

‘The kids of New York are the pride of our city, but to these companies, they´re just a source of profit,’ New York City Mayor Bill de Blasio said in a statement. ‘Preying on minors and hooking them on a potentially lethal, lifelong nicotine addiction is unconscionable.’

Artisan Vapor Franchise, Eliquidstop.com and Vapor 4 Life could not immediately be reached for comment.

There has been a regulatory crackdown on e-cigarettes and a growing number of lawsuits by young adults and parents of teenagers against leading e-cigarette company Juul Labs Inc and its parent company, Marlboro maker Altria Group.

Most of the lawsuits say only that users became addicted to nicotine as a result of using Juul, but some allege serious health consequences.

Some states, including New York, Michigan and Rhode Island, have moved to restrict the sale of flavored e-cigarettes. Massachusetts has gone further, instituting a four-month ban on all vaping products.

Last week, a New York judge blocked a state ban on most flavored e-cigarettes from taking effect after an industry group sued to challenge it, while a Massachusetts judge upheld that state’s ban.

On Thursday, Washington’s ban on flavored e-cigarettes – including those containing THC – officially took effect after being passed by the state’s board of health as an emergency measure.

San Francisco was the first city to ban vaping. Juul, which has cornered 70 percent of the e-cigarette market and has been hit with criticism for targeting youth, is headquartered there.

It had been the driving force – not to mention funder – behind a ballot measure to overturn the ban, but with a new CEO at its helm, Juul dropped its support and millions of dollars from the bill.