Teenage girls using e-cigarettes may be dramatically raising their risk of developing breast cancer, an expert has warned.

Professor Kefah Mokbel – one of the top breast cancer surgeons in Britain – fears an ‘epidemic’ of vaping among youngsters could have devastating consequences in the future.

Toxic substances in the vapours inhaled by users have been linked to breast cancer, particularly for women who have been exposed to them in adolescence. 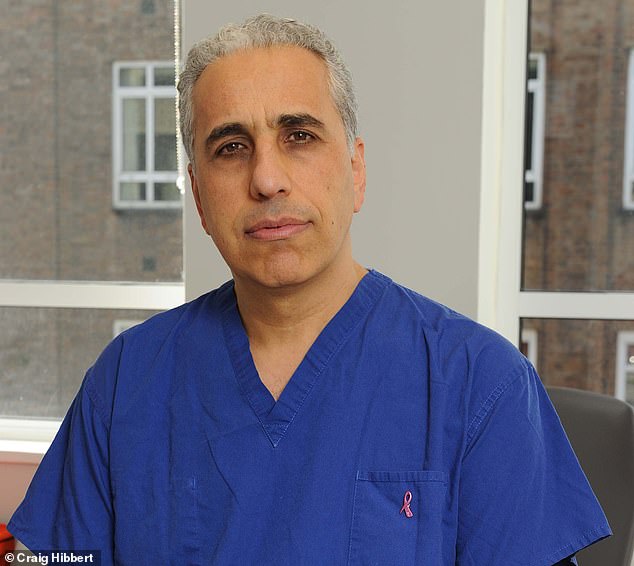 One of Britain’s leading surgeons, Professor Kefah Mokbel, fears vaping could increase the risk of teenage girls getting breast cancer later in life

Now Prof Mokbel has written to Ministers calling for health and education officials to issue new guidance on the potential dangers of e-cigarettes, saying it would be ‘unforgivable’ to do nothing.

His warning comes as:

Public Health England has consistently stated it estimates e-cigarettes to be ‘95 per cent less harmful than tobacco’. However, vaping products have not been used long enough for experts to know the long-term effects.

Prof Mokbel said ‘established science’ suggested toxic substances in the vapours that users inhale could trigger tumours in later life. Chemicals that mimic the sex hormone oestrogen are present in them, he said, while a new study has found many contain carcinogenic heavy metals. 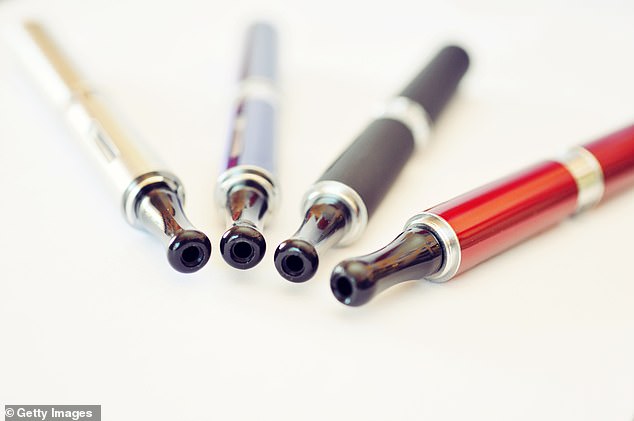 He feared youngsters had taken official messages promoting vaping as a healthier alternative to smoking – guidance he did not dispute – to mean that e-cigarettes were ‘by and large safe’.

Unscrupulous, profit-hungry firms were fuelling the problem with ‘aggressive and deceptive’ marketing of brightly coloured products clearly aimed at teenagers, he added.

In his letter to the Ministers, passed to The Mail on Sunday, Prof Mokbel warned: ‘It would be unforgivable if we were to do nothing, only to discover in 30 years’ time that widespread vaping among teenagers in the 2010s and 2020s had triggered a significant number of avoidable cases of breast cancer.’

No hard evidence currently exists linking e-cigarette use with breast cancer or any other type of cancer. But Prof Mokbel, the author of more than 200 academic papers and 14 books on breast cancer, said it would be complacent to assume no pattern would emerge in the future. 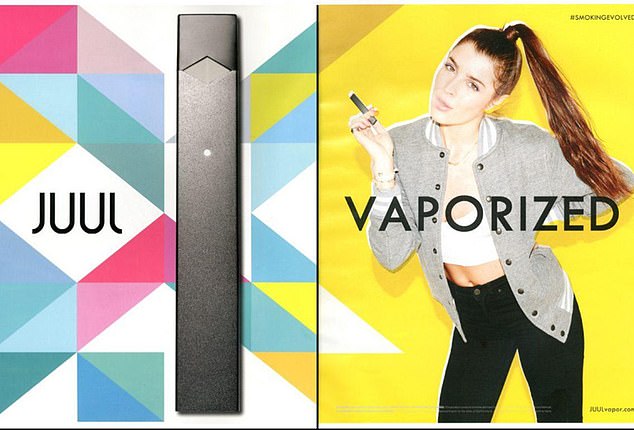 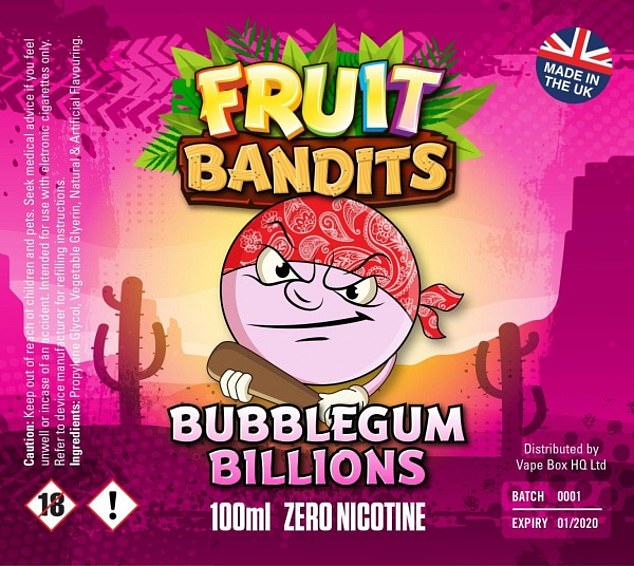 ‘What too few people realise is that e-cigarette vapours not only contain addictive nicotine, they also contain numerous potentially toxic chemicals that may well increase lifetime risk of cancer,’ he said.

E-cigarette vapours have been shown to contain endocrine disrupting chemicals (EDCs), he explained, which can mimic sex hormones such as oestrogen and affect how the body responds to them.

These include polycyclic aromatic hydrocarbons, which are produced when carbon-based material is burnt, certain heavy metals and other compounds.

Many teenagers consider e-cigarette vapours to be harmless but Professor Mokbel says there is growing evidence that chemicals and metals in them could prove toxic. Here are some of those potential dangers:

Meant to stop e-cigarette aerosols from igniting, these can act as hormone disruptors. A study in 2018 found ‘moderate to elevated levels’ of flame retardants called polybrominated diphenyl ethers, which can act as EDCs, in e-cigarette samples.

‘Polycyclic aromatic hydrocarbons’, caused by burning carbon-based materials, and are known cancer-causing agents. However, levels are much higher in tobacco smoke.

Carcinogenic nickel and chromium have been found in a high proportion of e-cigarette vapour samples.

According to the charity Breast Cancer UK: ‘There is considerable evidence that exposure to EDCs during critical moments of development, for example in the womb, during early infancy, childhood or during puberty, could also increase the risk of developing breast cancers later in life.’

Last month, scientists at Johns Hopkins University in the US also found an array of heavy metals present when they analysed vapours from 56 e-cigarette products, including the cancer-causing agents chromium and nickel.

Researcher Ana Rule, assistant professor of environmental health, said: ‘Chromium and nickel are both known to be carcinogens, while two of the other metals – lead and manganese – can cross into the brain, causing neurological effects.’

In more than half of e-cigarette aerosol samples analysed, they estimated exposure from 50 puffs exceeded daily environmental safety limits for chromium and nickel set by the US Centres for Disease Control.

They even found traces of potentially deadly arsenic – another carcinogen – in ten samples. Prof Rule and her colleagues think these metals leech out of alloy coils in e-cigarette devices, which are heated up to vaporise the e-liquid.

She believed the argument that vaping was less damaging than tobacco was of limited relevance when thinking about teenagers who had little intention of ever taking up smoking: ‘If they vape, they increase the risks to their health.’

Prof Mokbel’s fears follow studies indicating e-cigarette use could raise the risk of heart attacks and lung diseases. But there is deep unease that pointing out potential – but unproven – dangers of vaping will confuse people and make them wrongly think e-cigarettes are as bad as tobacco.

Hazel Cheeseman, director of policy at the anti-smoking pressure group Action on Smoking and Health, said: ‘Current evidence does not support the alarm expressed in [Prof Mokbel’s] letter. Regular use in teens remains low with no established link to increased rates of smoking or high risk of breast cancer, or any other type of cancer.’ 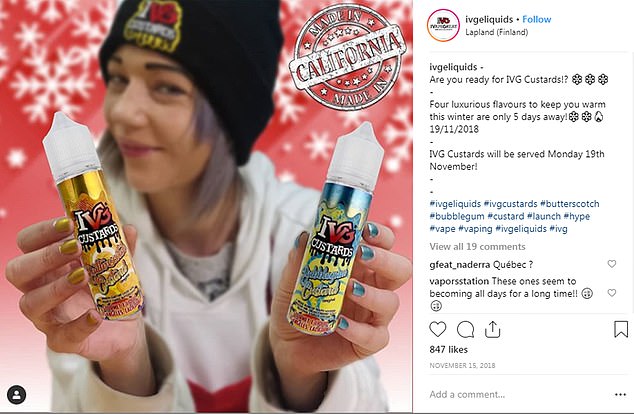 While teenage experimentation with e-cigarettes was increasing, regular use was stable at about one per cent, she said. She also quoted a 2018 Public Health England analysis which ‘concluded the cancer potencies of e-cigarettes were largely under 0.5 per cent of the risk of [tobacco] smoking’.

The same review found ‘the levels of metals identified in e-cigarette aerosol do not give rise to significant safety concerns.’ John Dunne, of UK Vaping Industry Association, accused Prof Mokbel of ‘scaremongering’.

He said: ‘Warnings such as these should be backed up by clinical evidence rather than scaremongering without any substance, potentially discouraging smokers from switching to vaping.’

Prof Mokbel stressed: ‘I have no doubt e-cigarettes are far safer than tobacco, and smokers should be encouraged to switch.

‘But given what we know is in e-cigarette vapour, it is my duty as a doctor and father to speak up.’

So many youngsters are now vaping that school heads are writing to parents. Amy Sellars, an assistant head at the private Latymer Upper School in London, warned: ‘I am writing to you with the news of a new craze that seems to be affecting young teenagers.’ She singled out US firm Juul which ‘has now become popular with British children as young as 12’.

Youngsters are simply wrong to think that this is safe, by Professor Kefah Mokbel

According to official studies, just one in 100 British teenagers is a regular ‘vaper’.

But if you ask me, that number is simply out of date – or many of the young people surveyed were economical with the truth.

Because as a father of two secondary school children, I know how widespread vaping now is in schools. It has become a quiet epidemic.

What is driving this is the mistaken belief among many teenagers that e-cigarettes are by and large safe.

In my professional opinion, they are not. I believe vaping is very likely to increase the long-term risk of cancer.

Of course, I understand there is currently no hard-and-fast evidence linking prolonged e-cigarette use with cancer in general, or breast cancer in particular. 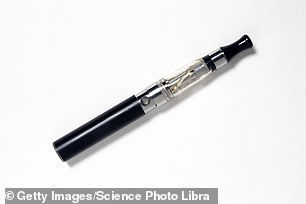 And I fully appreciate that e-cigarettes are much less harmful than tobacco, and would encourage smokers to switch.

But I fear a grave, unintended consequence of promoting vaping as a safer alternative to smoking has been large numbers of school-age children taking it up.

What too few people realise is that e-cigarette vapours not only contain addictive nicotine, they also contain numerous potentially toxic chemicals that may well increase lifetime risk of cancer.

It is particularly important adolescent females avoid exposure to these agents, as they can change the development of the breasts during puberty, raising the risk of breast cancer later in life.

We are exposed to them in the general environment – but the difference with vaping is that you are taking them directly into your circulation.

While numerous studies into the short-term health effects of e-cigarettes have been undertaken, it will take decades for long-term safety data to accumulate.

It would be unforgivable if we were to do nothing, only to discover in 30 years’ time that widespread vaping among teenagers in the 2010s and 2020s had triggered a significant number of avoidable cases of breast cancer. Instead, regulators should take pre-emptive action to protect susceptible teenagers from aggressive and deceptive marketing of e-cigarettes, which are often targeted at them.

Ministers should also instigate education programmes, to protect today’s youngsters from a very real threat to their health.

E-cigarettes, including a controversial brand accused of targeting children in the US, are now sold in the health section of Sainsbury’s.

Critics fear the presence of e-cigarettes on open shelves in the supermarket’s health and beauty aisle could send the false message that they are safe.

Among products on sale are sweet-flavoured e-liquids including Mango and Apple Orchard, made by Juul. The US firm, worth £30 billion and 35 per cent owned by tobacco giant Altria Group, has previously attracted controversy over its marketing tactics, including a 2015 advert featuring a young woman in a crop top posing with a Juul. The firm stresses its products are for over-18s only.

The Mail on Sunday found dozens of brands for sale with vibrant packaging which look almost identical to fizzy drinks and sweets – despite advertising rules that ban them from targeting children. Flavours sold by IVG Premium E-Liquids, based in Preston, include Butterscotch Custard and Bubblegum Custard. One advertisement on IVG’s Instagram page features its tobacco products in a classroom.

Fruit Bandits, distributed by a firm in the West Midlands, markets its Bubblegum Billions with cartoon fruit characters.

Both IVG and Fruit Bandits claim their products were not designed to appeal to children.