A woman who noticed bubbles in her urine found it was caused by faeces leaking into her bladder.

The 72-year-old was told she had a colovesical fistula, a rogue connection between her large intestine and bladder.

Doctors say one of the major symptoms of the fistulas, considered rare, is seeing bubbles in your urine.

This is thought to occur when gas that escaped from the colon, the large intestine, mixes with urine in the bladder. 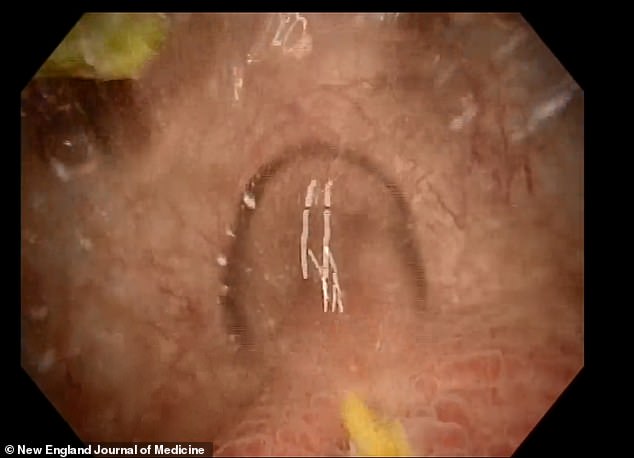 Medics released a stomach-churning clip showing faeces from the woman leaking out of her intestines and into her bladder.

Soft, yellow faeces can be seen pouring into the fluid in the bladder through a small hole on its surface after a burst of bubbles.

The unidentified woman’s fistula is believed to have been triggered by an earlier illness. Medics had to surgically remove part of her colon.

The unnamed woman’s case was revealed by doctors at the University of California, Los Angeles, after she was relieved of the problem.

WHAT IS A COLOVESICAL FISTULA?

A colovesical fistula is a channel between the intestine and bladder which may open up as a result of injury or illness.

It allows faecal matter and air to pass out of the intestines and into the bladder, which can cause painful symptoms.

Signs of the fistula include seeing bubbles, blood or even faeces in the urine, pain when urinating, abdominal pain or diarrhoea.

Colovesical fistulas are the most common type and make up around 70 per cent of all fistulas.

They may be caused by inflammatory bowel disease such as Crohn’s, or by cancer of the bladder or bowel.

Surgery is the preferred treatment, and can be used to remove the flesh bridging the gap and seal the holes in each of the organs.

She had first been to the doctor to complain about bubbles in her urine after being treated for a urinary tract infection.

And she had also been treated for a condition called diverticulitis, a condition which causes swelling in the intestines.

The diverticulitis is believed to be what triggered her colovesical fistula, which was confirmed by a CT scan of her abdomen.

Colovesical fistulas are the most common type of fistula and make up around 70 per cent of all types of fistulas.

Doctors found a mass poking out of the woman’s bowel and onto the wall of her bladder.

When they did a colonoscopy they found no evidence of a tumour or polyps – cancers and inflammatory bowel disease may also cause a fistula.

But they did find an ‘orifice that extruded gas and feculent material’ in the bladder. In simple terms, a hole leaking air and faeces between the two organs.

The woman was treated with an operation to close the gap and to remove part of her colon and, after two months, her symptoms had gone away and she recovered.

The condition may be painful and cause symptoms such as bubbles, blood or faeces noticeable in the urine, pain when urinating, diarrhoea or abdominal pain.

The video and woman’s case were revealed in the New England Journal of Medicine. 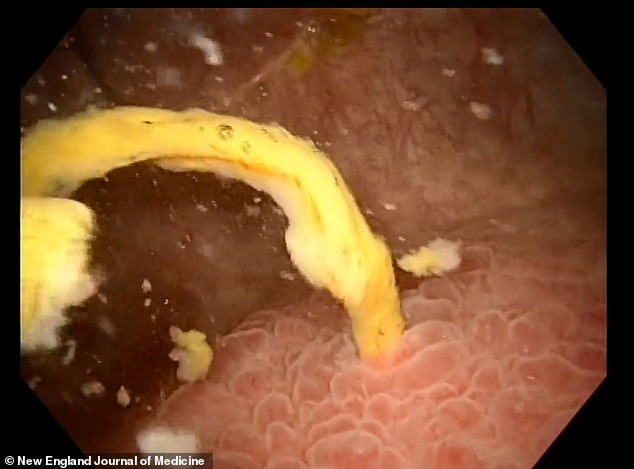 The clip shows faeces leaking into the bladder through a fistula which developed out of the bowel. People with this type of illness may notice faeces in their urine