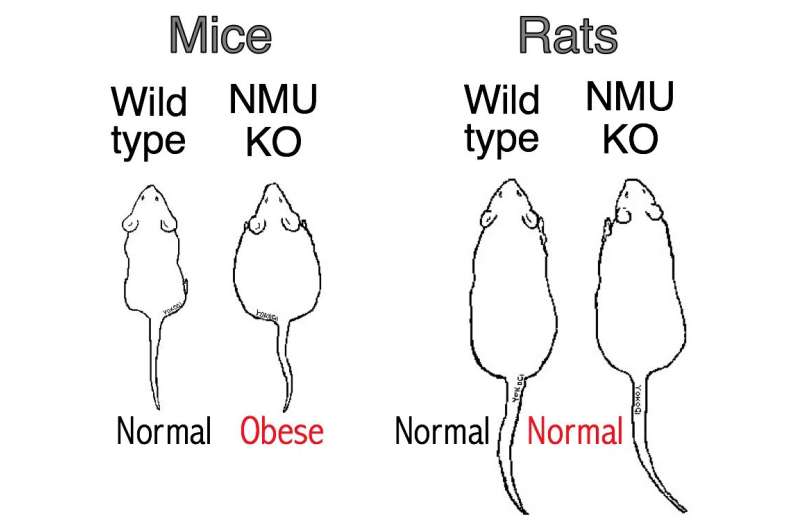 Our sensory urges ranging from anger to hunger are regulated by hormonal or neuronal signals. Often, these impulses appear as behavioral responses, evoked through complex biological reactions. Components of these reactions are produced in the body through expression of certain proteins, which in turn, are coded by certain genes.

Neuromedin U (NMU) is one such neuronal protein hormone that is has been identified for a variety of physiological roles in multiple species, including mammals. It is involved in metabolic processes that are responsible for energy expenditure, feeding behavior, the maintenance of day-night cycle in our biological clock, tumor development and immunity. Its “anti-hunger” (anorexigenic) function, which has been proven in animal models including mice, makes it a prime target for anti-obesity drugs, which work on the principle of inhibiting the body’s urge to eat more than what is actually required.

In mice, pharmaceutical research has demonstrated that NMU decreases food intake and raises energy expenditure. Absence of NMU in mice leads to excessive eating behavior, low body temperature, low activity, and the development of obesity. However, inconsistent results have been obtained in similar administration experiments with rats, where the critical role of NMU energy metabolism remains unclear.

A research group previously found that NMU mRNA expression in the rat pars tuberalis (PT) of the pituitary is higher during the light phase and lower during the dark phase due to melatonin-induced suppression.

The same team has now examined whether NMU in PT is related to feeding rhythms, which cause rats to eat mostly at night. The study was jointly led by Prof. Sayaka Aizawa of the Graduate School of Natural Science and Technology, Okayama University, and Dr. Makoto Matsuyama of the Shigei Medical Research Institute.

Their research was published online on October 27, 2022, in Scientific Reports with Ms. Kyoka Yokogi, a graduate-student from Okayama University, serving as the lead author.

The team wanted to investigate the anorexigenic function of NMU using rat models in which this neuropeptide was present or absent. To this end, they first generated rats in which the NMU gene was silenced, with the rGONAD (rat Genome-editing via Oviductal Nucleic Acids Delivery) technology recently developed by Dr. Matsuyama. These rats were referred to as NMU KO rats and failed to produce the neuropeptide. However, unlike NMU KO mice, the NMU KO rats did not increase their food intake and did not become obese, much to the team’s surprise.

Given that NMU may be linked to feeding rhythms, the researchers examined the daily feeding pattern and discovered no differences between NMU KO and wild type (with the NMU gene) rats in both light and dark phases. “It is likely that NMU in rats is not critical for feeding and energy metabolism regulation, and is not the central regulator of food intake,” explains Prof. Aizawa.

Given its multitude of roles, the protein is present in multiple organs, and transmits signals through receptors. The researchers found that in the rat brain NMU expression was restricted and abundant in the pituitary PT, which has never been observed in mice. In contrast to mice, NMU and its receptors are rarely expressed in brain regions that involve feeding control in rats. This indicates that NMU does not suppress feeding in rats.

Prof. Aizawa elaborates, “Our findings in rats contradicted those in mice. This difference could be due to species differences in the expression pattern of NMU and its receptor genes between rats and mice. Besides, the anorexigenic effect of central NMU administration could be an effect that lasts only briefly under certain conditions.”

Although NMU has been studied as a feeding suppressor hormone, it is now clear that it serves different functions in different species, including those that are very closely related. More research is however, needed to determine whether rats or mice are a better model for understanding the physiological functions of NMU in humans and the associated behavioral responses.