Skinny people don’t exercise more than the rest of us — they just eat less, a study suggests.

It has long been thought that naturally slim people move more so are able to eat whatever they like.

But researchers have found the opposite is true — they actually exercise and eat less.

They looked at the diets and energy levels of 150 naturally skinny people and compared them to 173 people of a normal weight.

Over the two-week study, naturally slim people did 23 per cent less physical activity and spent more time sitting or lying around. They also ate 12 per cent less food.

But they were found to have a faster resting metabolism, which may help them burn more calories while idle than the average person. 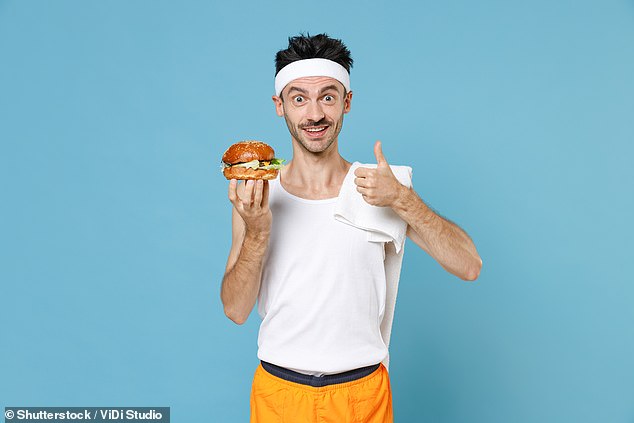 Skinny people don’t exercise more than the rest of us — they just eat less, a study suggests (file)

Professor John Speakman, who led the study from the University of Aberdeen, said: ‘The results came as a real surprise.

‘Often when people talk to super-lean individuals, they say that they can eat whatever they want.

‘But our work showed that what they actually eat is much less than people in the normal body mass index (BMI) range.’

The study, published in the journal Cell Metabolism, recruited naturally slim people with an average BMI of 17.

A BMI below 18.5 is classed as being underweight, and the people in the study appeared to be naturally slim, with researchers ensuring they were not on a diet, had not lost weight through illness and did not have an eating disorder.

HOW MANY CALORIES DO I NEED EACH DAY?

The basic amount of calories an average adult needs per day is 2,000kcal for women or 2,500kcal for men.

This is based on the amount of energy the body needs to carry out basic functions and to walk and work throughout the day.

People who exercise a lot need to eat more calories to fuel their efforts, and young people and children burn more energy, too.

If you eat more calories than you burn in a day, you will get fatter.

Eating fewer calories than you burn will make you lose weight.

Foods which are processed and have high levels of carbohydrate, sugar and salt have higher calorie numbers than fresh fruit and vegetables.

Surprisingly these naturally thin people were found to spend 96 per cent of their time being sedentary or doing only light physical activity.

But they appeared to eat significantly less than people of a normal weight, whose BMI was below 25 – the threshold for being overweight – and above 21.5.

To work out if naturally trim people really could eat what they liked, researchers did not ask them to keep food diaries, which people can misremember and get wrong, but calculated their calorie intake directly based on how much energy they burned off.

People’s energy expenditure was worked out by giving them a daily drink of water containing heavy isotopes of hydrogen and oxygen.

These are measured in the urine because they are eliminated in the body at a different rate based on how many calories someone burns and converts into carbon dioxide.

Using this energy expenditure, measured against physical activity, researchers suggest naturally slender people in the study must have eaten an average of 12 per cent less than people of a normal weight.

But they were also fortunate in being shown to burn more energy while simply sitting still, having a faster metabolism than people of normal weight.

In fact their metabolism was 22 per cent higher than expected based on their body fat levels.

This was linked to higher levels of thyroid hormones, which can help to make people feel less hungry and keep them slim.

The researchers are now looking at whether naturally thin people have a higher metabolism and boosted thyroid hormones due to their genes, and have already found some genetic quirks which may help to explain how people avoid gaining weight.

Evidence suggests around 1.7 per cent of people are underweight.

While some will have eating disorders or have lost weight through illness, many are completely healthy but simply stay thin.

The current study looked at Chinese people only, and other naturally thin people not involved in the study may be more active (SUBS – pls keep).

But the results suggest naturally slim people can get away with not getting much exercise, based on their low body weight and eating less, as those in the study tended to have lower bad cholesterol than people of a normal weight.

Dr Sumei Hu, co-lead author of the study from the University of Aberdeen, said: ‘It was a big shock to me that the super-lean individuals were much less active than people in the normal BMI range.

‘I always thought super-lean individuals must be really active to keep their low body weight, but our results showed the opposite.’