What’s the truth about Covid vaccines and tremors? Viral videos of people violently shaking are shot down by experts who say they could be staged — or the result of ’emotional distress’

Experts today cast doubts over the authenticity of a series of videos that claim to show patients violently shaking after a reaction to the Covid vaccine.

In one of the more shocking clips, an elderly female patient struggles to walk from the bathroom to her hospital bed while experiencing tremors. The video was shared more than 26,000 times and viewed by 11million people on Twitter.

Other videos show patients convulsing and struggling to move. But experts told DailyMail.com even though they cannot prove all the videos are fake, the shaking was ‘not characteristic’ of the seizures patients claimed to be suffering. It has been suggested that the shakes may be an effect of fears over getting the vaccine.

They added that the videos were a reminder of the ‘dangerous’ wave of anti-vaccine sentiment in the US, which has been blamed for a dip in vital childhood inoculations. 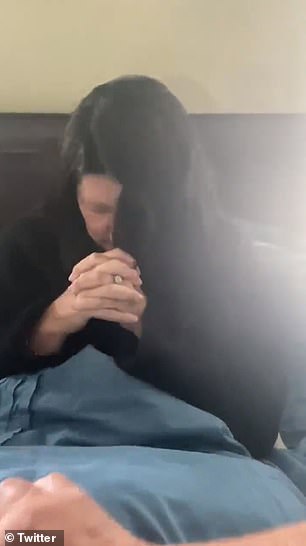 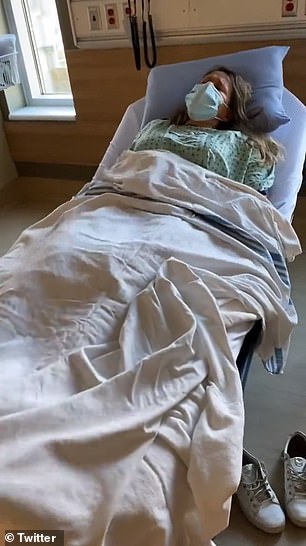 The above clips show Angelia Desselle, from Louisiana (left), who claimed to have suffered seizures after getting the Covid vaccine. On the other side is an unidentified woman who also claimed she had suffered seizures 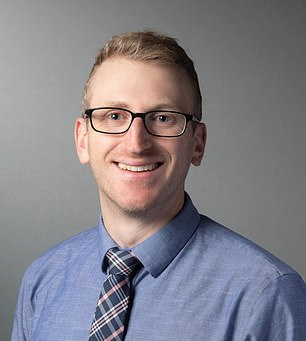 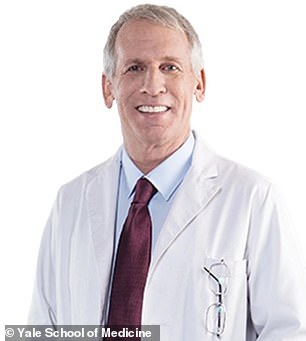 Dr Scott Roberts, an associate medical director at Yale School of Medicine in Connecticut, said it was difficult to tell whether the clips were fake. Dr Stuart Fischer, an emergency medicine expert in New York, said seizures are not a known reaction of the Covid vaccine

Dr Scott Roberts, an associate medical director at Yale School of Medicine in Connecticut, warned the clips were ‘misleading’ and ‘could be dangerous’ if they convinced someone not to get a vaccine.

He noted there was often ‘inconsistency’ between what a tweet stated and what the clip showed.

‘In one, the tweet says the woman is paralyzed,’ he said, ‘but in the video, her legs are clearly shaking and there are multiple points when she clutches her hands’.

He also said that the patients were not experiencing seizures because they remained responsive — which is not the case with full-body seizures.

In one video, a woman is shaking as she gingerly steps out of the bathroom. She also has what appears to be a colostomy bag attached to her side.

The clip was shared by Alex Berenson, a former New York Times reporter who has become one of the leading vaccine-skeptical voices in America during Covid. 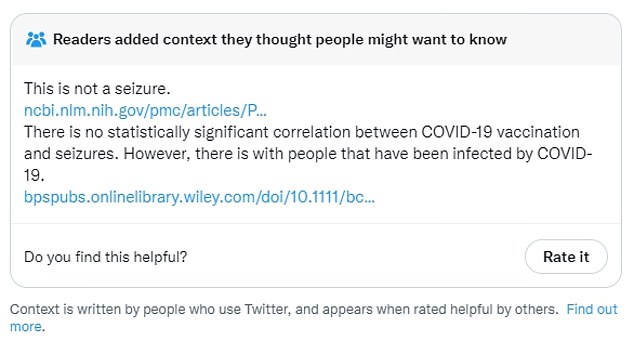 A warning has already been added to the bottom of this video by Twitter. It was shared by anti-vax nurse James Cintolo, who is based in Boston 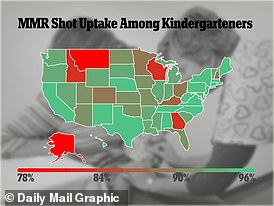 Just 93 percent of children had their MMR, DTaP, varicella and polio vaccines by the start of the 2021-2022 school year, down from 94 percent the previous year, according to the Centers for Disease Control and Prevention (CDC). It means about 250,000 children are unprotected against potentially fatal diseases.

Elon Musk gave Mr Berenson Twitter files a few weeks ago that exposed the uncomfortable ties between the social media giant and Pfizer executives while the company was under previous ownership.

In another clip, re-posted by anti-vax nurse James Cintolo, a woman is shown convulsing while sitting in a bed at home.

The individual filming puts their hand on the woman to try to steady her, but she continues to convulse.

It was posted under the caption: ‘Angelia, 45, a healthcare worker was mandated to take Pfizer’s Covid vaccine.

After watching the video, Dr Roberts said: ‘It does not look like a seizure to me.

‘Patients with generalized tonic clonic seizures are unconscious (and obviously not walking like the person in this video is).’

Asked whether we can know if it is authentic, he said that based on the videos it was impossible to know for certain whether this was the case.

A tonic seizure causes a sudden stiffness in the muscle, while a clonic seizure is a repeated jerking movement of the arms and legs on both or one side of the body.

He added: ‘There is not an association between seizures and the Covid vaccines, but there is with Covid and the infection itself.

‘There are side-effects from Covid vaccines, it’s true,’ he added. ‘But seizures are not among them.’

Billions of Covid vaccine doses have now been administered around the world, so even very rare side effects have now been detected by doctors. But seizures are not among them.

The woman in the clip of a person trying to walk out of the bathroom is Angela Desselle, then 45, with the clip first posted back in January 2021.

The mother from Louisiana claimed she got a dose of the Pfizer vaccine on January 5, and was then admitted to hospital on January 9 after suffering an alleged reaction.

She said that she suffered severe convulsions and seizures, which she claimed doctors said were ‘related to the vaccine’.

Her son Brant Griner added that this was due to the ‘metals’ in the Pfizer vaccine.

Ms Desselle has never provided evidence that she received the Covid vaccine or the hospital she was treated at. There are no metals in the Pfizer Covid vaccine.

In the reposted clip — which has been viewed 3.7million times — Twitter has already added a warning. It reads: ‘This is not a seizure. There is no statistically significant correlation between Covid vaccination and seizures. However, there may be a link for people who have been infected with Covid — although only in very rare cases. 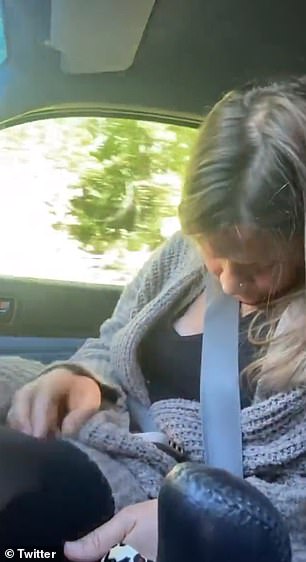 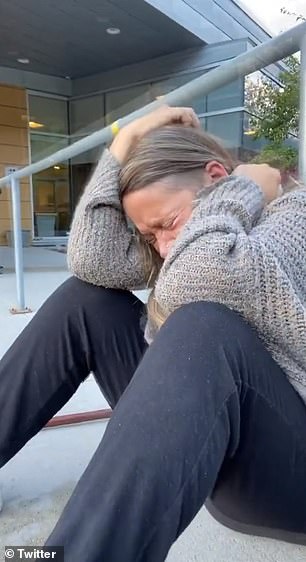 The unidentified woman also claimed to have numbness in her face. She was discharged from the medical center (right) after doctors ran tests and found nothing of concern 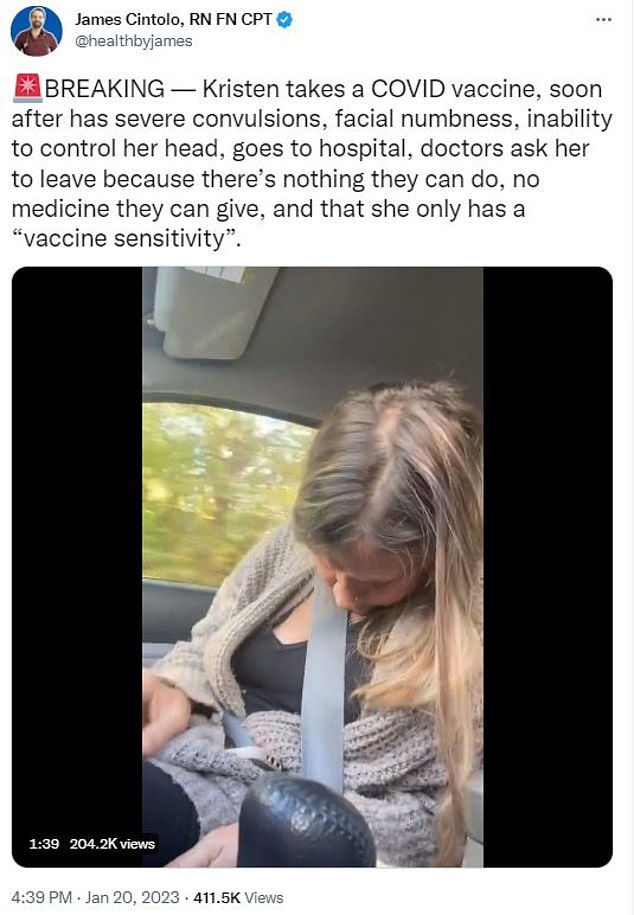 The video has resurfaced online, amid aflurry of anti-vax videos

The vaccination coverage for measles — one of the most contagious human viruses yet totally preventable — has been consistently dropping due since the start of the Covid pandemic.

Misinformation linked to Covid vaccines has also led to swathes of parents rejecting normal childhood shots, despite immunizations being the most effective way to protect children from measles.

A joint report by the World Health Organization (WHO) and the Centers for Disease Prevention and Control (CDC) found that 25 million children went without their first dose and another 14.7 million missed their second shot.

The drop is a blow to worldwide efforts to eliminate the virus and leaves millions of young children vulnerable to infection.

Researchers from the University of Liverpool analyzed Google Trends and found that anti-vaccine searches ‘have had a continued and growing presence during the pandemic.’

A seizure is a sudden disturbance of electrical activity in the brain, causing changes in behavior and involuntary movements. Having two or more seizures leads to a diagnosis of epilepsy.

They can be triggered by missed medication, a lack of sleep, stress, alcohol and menstruation.

Seizures have been recorded after Covid vaccination, but they are not considered common enough to be a genuine side-effect of the shots.

The Centers for Disease Control and Prevention (CDC) does not list them as a side-effect.

But it continues to monitor reports of them through the Vaccine Adverse Event Reporting System (VAERS). This same system allowed experts to identify myocarditis as a very rare side-effect of Covid vaccines.

On the other hand, research has suggested seizures may be an effect of a Covid infection.

These may be triggered by emotional stress linked to the infection, inflammation and hypoxia — or a low level of oxygen in the blood — among other factors.

Dr Stuart Fischer, an emergency medicine expert and author of the Little Book of Big Medical Emergencies, told DailyMail.com: ‘There is no recorded reaction [to the Covid vaccine] involving seizures. This has never been reported.

‘However, all reactions good and bad are part of the immunogenic response, the expected reaction by the human body necessary to produce antibodies to Covid.

Mr Fischer, said he also suffered a reaction after getting his second dose of the Pfizer Covid vaccine.

‘I had a minor reaction to the second Pfizer Covid vaccination, although I am glad that I [got the vaccine].

‘I had very minor chills, slight nausea and minor pain at the site of injection. All of these vanished within a day.’

Medics are concerned that anti-vaxx rhetoric is leading to a drop in inoculation rates for other preventable diseases across the US.

There was a measles outbreak in Ohio last year that affected more than a hundred children, and in New York state a man was paralyzed after catching polio — also prevented by vaccines.

Dr Roberts said: ‘We have seen decreases in vaccination rates in many of our health divisions.

‘In recent years we have seen a sporadic measles outbreak, but this is a completely preventable disease and a clear example of vaccine success.,

‘Smallpox too, no one remembers, but there is a reason for that. It was removed by vaccines.’

In another video, an unidentified woman is shown with her head hanging down low in a car as she is driven to the hospital.

The other woman in the car says she has a numb face and an inability to control her head. She is also shown tapping her lap.

She said she had received a second dose of the Covid vaccine, but did not say whether this was from Pfizer or Moderna.

The video shows the woman is later discharged from hospital, after doctors find there is nothing wrong with her based on tests.

Medics in the US have suggested that these patients may be suffering from a condition called functional neurological disorder (FND).

This condition is triggered by the emotional stress and fears over getting a vaccine, rather than the vaccine itself.

Dr David Perez, an FND expert at Massachusetts General Hospital, wrote in JAMA Neurology Viewpoint: ‘These are symptoms of a real, brain-based disorder that sits at the intersection of neurology and psychiatry.

‘Some people with FND have a heightened awareness of their body and increased state of arousal and threat, which may hijack normal neural networks controlling voluntary movements.’

Thsi is a disruption to the brain’s normal mechanisms for controlling the body and can be triggered by physical or emotional evemts, including vaccinations.