A man was left critically injured after being hit by a car on his commute cut open his chest, leaving his lung expanding and collapsing outside of his body.

Yogendra Kumar, 36, was cycling to his job as a wine salesman when a vehicle hit him on November 23.

Mr Kumar was flung 20ft (6metres) in the air and landed on a tin sheet that split his chest in two, causing his left lung to come out of his body.

After being passed between hospitals who were unable to treat a case so severe, Mr Kumar was eventually submitted to Fortis Hospital in Noida, North India – nearly ten hours after the accident.

Rapidly losing blood, surgeons re-constructed Mr Kumar’s chest in one hour and 46 minutes. He was discharged a week later and back at work after 20 days with ‘slight pain’. 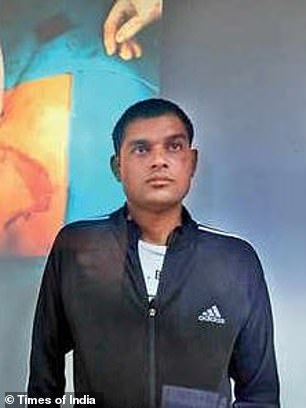 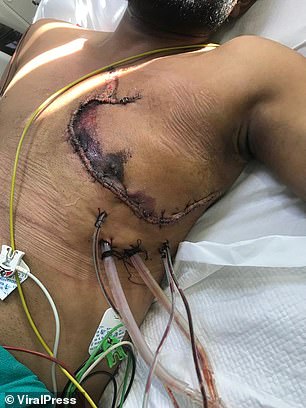 Yogendra Kumar was left critically injured when a car crash cut his chest in two, leaving his left lung inflating and collapsing outside of his body. Pictured left after the ordeal, Mr Kumar had emergency surgery to reconstruct his chest (seen right) and fix several broken ribs

As well as opening his chest, the accident also fractured several of Mr Kumar’s ribs and left a large cut down his left lung. His uncle, who was cycling with him, died at the scene. It is unclear who was responsible for the collision.

Rather than panicking at the sight of his lung, Mr Kumar stayed calm and called for an ambulance.

‘I got up to see my left side was torn completely,’ he said. ‘I took the cloth I had and tied it around that side of my body.’

When the ambulance arrived, Mr Kumar was initially taken to a government hospital in Hapur, before being referred to a private hospital in Meerut.

The complexity of his case meant he was again referred to the private Fortis Hospital. By which time his condition was grave.

Dr Vaibhav Mishra, head of the department of cardio thoracic and vascular surgery, and his team immediately took Mr Kumar in for an emergency surgery.

The surgeon described Mr Kumar’s injury as ‘possibly the first [of its] kind of case I had come across in my life’. 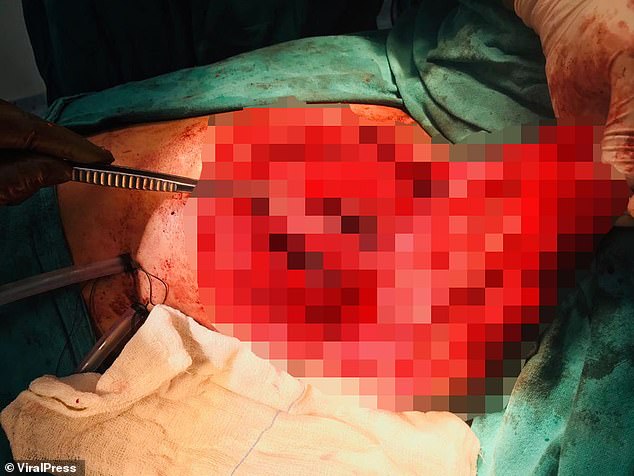 In one hour and 46 minutes, surgeons at Fortis Hospital in Noida, North India, closed his chest

‘There are grotesque accidents in which the organs come out but they generally do not make it to hospitals,’ Dr Mishra said.

‘Normally, in such situations, the lung can collapse due to the exposure to the atmospheric pressure. But in his case, the lung was fortunately functioning.’

The surgeons set about reconstructing Mr Kumar’s torn apart chest, with his skin, muscles, ribs, muscles under the ribcage and left lung all being damaged.

‘To repair all the layers in proper ratio was a challenge because the entire area was very haphazardly torn apart,’ Dr Mishra said.

Speaking after the ordeal, Mr Kumar said: ‘I told doctors I wanted to be saved only for my children.’