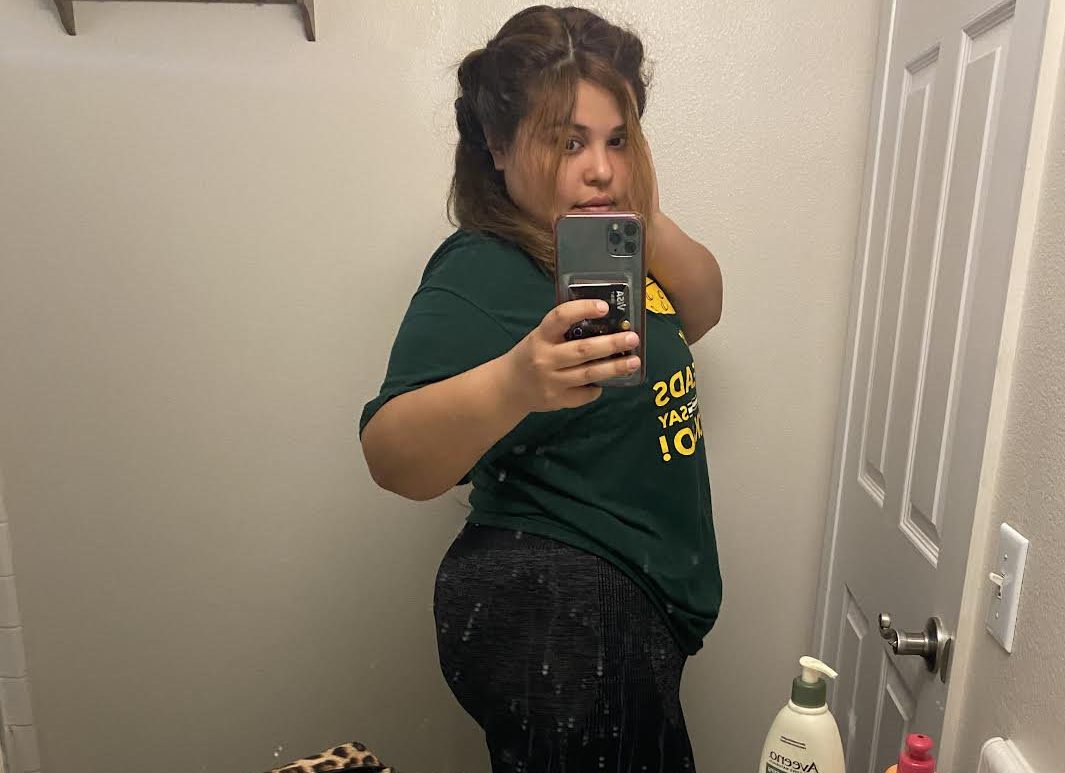 A woman who struggled to lose weight has discovered the bizarre cause – a tumour with hair and teeth growing in her ovary.

Jaimi Conwell, 28, a nurse from Texas, US, had been trying to lose weight for years, trying a range of diets including eating low calorie and keto foods, as well as exercising.

But despite working out twice a day and eating a healthy diet, she was unable to lose any weight. In fact, within the last two years, she started to gain weight rapidly.

Jaimi knew something wasn’t right, so decided to visit her doctor in March last year after experiencing some worrying symptoms.

‘I would bend over to tie my shoe and get nauseous, which I thought was normal for bigger people,’ she said.

A test showed that Jaimi’s white blood cell count was abnormal and she was put under anaesthesia, with her mum being told of the doctors’ discovery in the waiting room.

Jaimi said: ‘The doctor came in and told her I had a massive tumour in my abdomen that had engulfed my right ovary.

‘He asked if they could remove it and my mum agreed, so I had the tumour along with my right ovary removed.

‘After I woke up, I took a walk with my mum and I could see the worry in her face, so I knew something wasn’t right.

‘She told me about the tumour and that they were unsure if it was benign. I was in so much shock, that I can’t remember how I was thinking or feeling at the time.

‘At one point though, I remember thinking: “Am I going to die? Did I even live the life I wanted to?”‘

Although she was stunned, Jaimi agreed with the choice to remove her right ovary as multiple tests showed how dangerous the tumour was.

She was diagnosed with a teratoma tumour – a slow-growing tumour that had been gradually increasing in size her entire life.

As the tumour weighed 20lbs, it is believed that it overtook all the nutrients she was giving her body in order to grow.

Jaimi said: ‘I was in shock, as that’s like having three kids inside of you.

‘[I was told] that it was also growing teeth, which was an absolute shock. It also grew hair and I think that was more disgusting for me than anything.’

As twins run in her family, it was speculated that Jaimi may have had a twin in her mum’s womb.

The shocking revelation also meant the 28-year-old had to start thinking about fertility issues. She initially believed having an ovary removed may prevent her starting a family – something that’s a big goal for Jaimi in future.

‘I was so depressed and crying all the time, until I saw my OBGYN [Obstetrics and gynaecology] who assured me that all my hormones and eggs will go to my left ovary,’ she said.

‘I shouldn’t have any issues getting pregnant, but not being able to have kids is still heavy in the back of my mind.’

Armed with the knowledge that the tumour was likely the reason she had failed to lose weight so far, she returned to her diet and exercise regime, eating protein shakes, fish, chicken and salads.

Jaimi decided to upload her transformation to TikTok, after her sister said she should share her weight loss journey.

In one clip, which has received 1.8 million views and over 437,000 likes, she shows off her transformation, and has found a wealth of support among her followers.

‘You’re so pretty,’ one viewer commented, followed by a love heart emoji.

Another person added: ‘You were beautiful before and beautiful now.’