A Government-funded trial looked at data from 24,500 British women who had been tested for HPV testing alongside their routine smear test.

It found women over 40 who tested negative for HPV – a virus that causes almost all cervical cancer cases – did not need to be screened for another decade.

The study also found younger women with a negative HPV test could go longer than the current three years between appointments.

It comes as smear test attendance is known to be at an all-time low — just 71 per cent of those invited go for their smear, NHS figures show.

NHS England announced it is adding HPV testing onto the standard smear tests by 2020. They are currently not offered but will be rolled out starting in July this year. 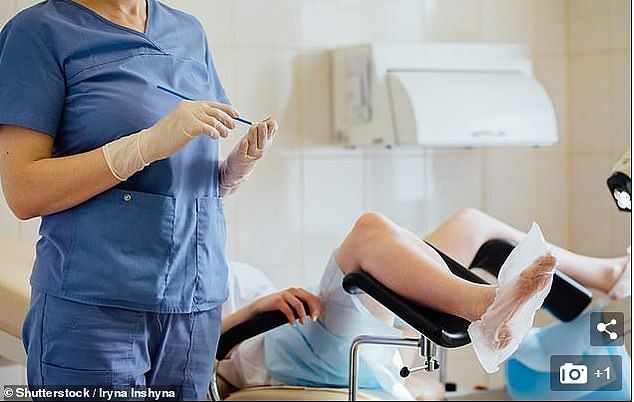 NHS Scotland will roll out HPV testing onto the standard smear tests starting in January 2020. In Wales, the tests have been running since September 2018.

Northern Ireland has yet to confirm a date for rolling out the new tests.

The 10-minute tests, considered embarrassing by many, take a sample of cells from a woman’s cervix – the connection between the vaginal canal and the womb.

These are then examined for signs of any abnormalities which may lead to cervical cancer in the future. If there are signs, preventative treatment may be given.

All women aged between 25 and 64 living in the UK are invited to have smear tests by their GP.

Changes in cervical cells are often caused by the human papilloma virus (HPV), which can be transmitted during sex.

The new findings – from women in Manchester – will feed into the National Screening Committee’s recommendations to the Government.

The researchers added it would also be more cost-effective for the NHS to prolong the times between screen appointments, which women regularly skip.

Human papilloma virus (HPV) is the name for a group of viruses that affect your skin and the moist membranes lining your body.

Up to eight out of 10 people will be infected with the virus at some point in their lives.

There are more than 100 types of HPV. Around 30 of which can affect the genital area. Genital HPV infections are common and highly contagious.

Many people never show symptoms, as they can arise years after infection, and the majority of cases go away without treatment.

It can lead to genital warts, and is also known to cause cervical cancer by creating an abnormal tissue growth.

Annually, an average of 38,000 cases of HPV-related cancers are diagnosed in the US, 3,100 cases of cervical cancer in the UK and around 2,000 other cancers in men.

HPV can also cause cancers of the throat, neck, tongue, tonsils, vulva, vagina, penis or anus. It can take years for cancer to develop.

They said: ‘The possibility of a small increase in risk of progression to invasive cancer between screening rounds and perhaps some increase in the proportion of women who fail to attend regularly must be weighed against the advantages for patients and reduction of NHS costs with longer screening intervals.’

The study results also suggest that immediate referral of all HPV positive women with mildly abnormal cytology results may be over-cautious.

They propose retesting at one year for high-risk groups and three years for lower risk patients.

Human papillomavirus (HPV), the culprit for most of the cancers, infects most people at some stage in their life and is harmless in the vast majority of cases.

HPV is spread by skin-to-skin contact and can also spread through the mouth, not only by penetrative sex.

For most women, an HPV infection which they clear naturally puts them at low risk of developing cancer.

‘Virtually all’ cervical cancers occur in women with a specific type of HPV infection which longer screening intervals would still pick up, the team of experts say.

‘Cervical screening aims to pick up abnormal cells before cancer has a chance to develop, so we’d encourage people to think about taking part when they receive their invitation, whatever their age.

‘Women between 25 and 49 should receive an invitation every three years and women between 49 and 64 every five years.’

‘It’s important that the screening programmes are up to date with the evidence, and any potential changes in intervals will be reviewed by the National Screening Committee.’

Scientists last month predicted cervical cancer could be wiped out within the next few decades in the UK because the HPV vaccine is proving so effective.

A major study looking at screening programmes involving 60million people in 14 countries found levels of the two strands of HPV that are mainly responsible for the cancer fell 83 per cent in girls aged 13 to 19 after five to eight years of vaccination.

They also fell 66 per cent in women aged 20 to 24, according to results published in The Lancet medical journal.

WHAT IS A SMEAR TEST?

A smear test detects abnormal cells on the cervix, which is the entrance to the uterus from the vagina.

Most test results come back clear, however, one in 20 women show abnormal changes to the cells of their cervix.

In some cases, these need to be removed or can become cancerous.

Being screened regularly means any abnormal changes in the cells of the cervix can be identified at an early stage and, if necessary, treated to stop cancer developing (stock)

Cervical cancer most commonly affects sexually-active women aged between 30 and 45.

In the UK, the NHS Cervical Screening Programme invites women aged 25-to-49 for a smear every three years, those aged 50 to 60 every five years, and women over 65 if they have not been screened since 50 or have previously had abnormal results.

Women must be registered with a GP to be invited for a test.

In the US, tests start when women turn 21 and are carried out every three years until they reach 65.

Changes in cervical cells are often caused by the human papilloma virus (HPV), which can be transmitted during sex.

In January 2018, women shared selfies with smeared lipstick on social media to raise awareness of the importance of getting tested for cervical cancer in a campaign started by Jo’s Cervical Cancer Trust.