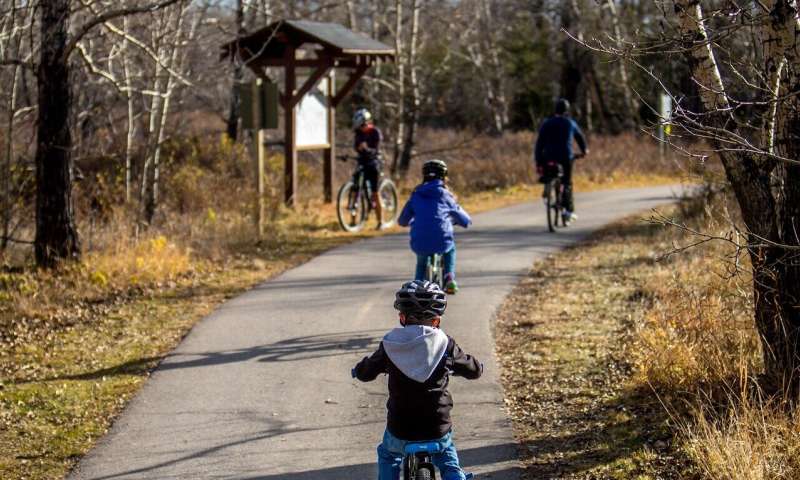 To reduce the number of traumatic brain injuries in children, a team of health care professionals at the Johns Hopkins University School of Medicine and the Johns Hopkins Bloomberg School of Public Health is urging emergency room physicians to help ensure that youngsters are thoroughly educated on the proper use of bike helmets, especially in urban environments where most severe head injuries occur.

One way, they suggest, is through the use of a new educational program—including support materials and a video made with the ideas and insight of Baltimore, Maryland, youth—that the Johns Hopkins team pilot tested in 2017. The successful outcome of that trial is reported in the May 17, 2020, issue of Health Promotion Practice.

“For families in low income and minority communities, programs that inform about helmet safety measures is crucial,” says lead study author Leticia Ryan, M.D., M.P.H., associate professor of pediatrics and director of research in pediatric emergency medicine at the Johns Hopkins University School of Medicine. “Our youth-oriented and culturally tailored approach could be explored as a strategy to achieve that goal.”

In the United States, 26,000 of the 325,000 children treated each year in emergency rooms for bicycle-related injuries experienced a traumatic brain injury. The Johns Hopkins researchers say prevention programs are needed but that they must be designed to reach all groups, regardless of socioeconomic status.

For example, they recommend providing helmets to disadvantaged families during information sessions about their proper use. The team says another way to overcome social barriers to prevention is to use educational materials—such as the Baltimore video—developed with input from the target audience of young bicycle riders.

In their study conducted between September and December 2017, the researchers worked with 20 urban Baltimore parents and their children, ages 8 to 15 (average age of 9), who had ridden a bicycle within the previous six months. To start, the children completed a pre-intervention survey and watched the “You Make the Call” video where urban youth discuss the importance of wearing a helmet. The intervention program also included a free helmet, fitting instructions and a parent guidance document. The study ended with the children completing a post-intervention survey.

Prior research had shown that the highest injury rate from bicycle use without a helmet occurs in the 10- to 15-year age range, and that most bicyclist deaths occur in urban areas. In the Johns Hopkins study, 13 (65%) of the participants reported in the pre-intervention survey that they rode their bikes on a weekly basis; however, 16 (80%) said that they did not own a helmet or never wore a helmet.

In the post-intervention survey after one month, five out of the 20 children (25%) reported riding their bikes during the study period, and all said that they used a helmet. All 20 children reported that they intended to use a helmet as a result of the intervention program.