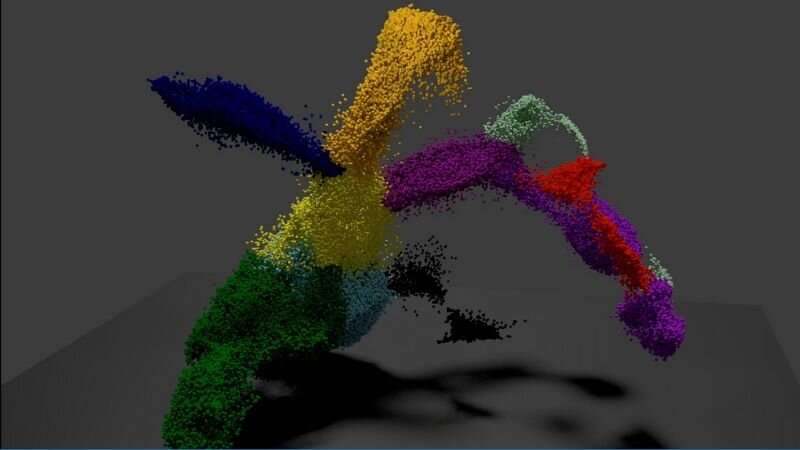 Johns Hopkins Medicine researchers report they have created a method of mapping how the central nervous system develops by tracking the genes expressed in cells. The technique, demonstrated in mouse retinas for this study, follows the activity of the genes used by individual cells during development, allowing researchers to identify patterns in unprecedented detail. This precise kind of road map, say the researchers, could be used to develop future regenerative treatments for blinding and other neurological diseases.

“This is far and away the most comprehensive map we have of cellular development in the central nervous system,” says Seth Blackshaw, Ph.D., professor of neuroscience at the Johns Hopkins University School of Medicine, and a faculty member of the Johns Hopkins Institute for Cell Engineering.

A description of the work is published May 22 in the online edition of the journal Neuron.

Blackshaw says the retina, a well-understood structure that contains many of the cell types found throughout the rest of the nervous system and as such, is an excellent example to use in studies of how the central nervous system develops.

Each of the many cell types that make up the retina are produced by neural progenitors—stem cell-like cells that have the capacity to develop into virtually any retinal cell type depending on what genes are switched on and off during development. The gene patterns needed to create each cell type occur along a strict timeline. Neurons, like the light-absorbing rods and cones in the retina, are produced by younger progenitors, while supportive glial cells are created by older progenitors.

To study the process in detail, and create the road map, the researchers first sequenced the DNA of individual mouse retinal cells at different developmental time points—from the first progenitors to cells of the adult retina.

The researchers then put this information into a machine learning computer program that Stein-O’Brien developed. The program was designed to rapidly compress the immense amount of genetic data, grouping like cells together to generate a map that let researchers visualize the development process. The computer program produced a branching structure that allowed researchers to see which cell types give rise to others, which are most closely related, and what genetic changes occur that lead to the over 100 cell types found in the mouse and human retina.

“The map provides a way for us to see the impact individual genes and gene networks have on the developing central nervous system,” says Blackshaw.

In a proof-of-principle experiment, the researchers next chose to take a close look at three of the genes: nuclear factor 1 (NFI) a, b and x, which are essential to helping a progenitor determine its age and what types of retinal cells it can produce.

The researchers genetically engineered mice to either express the three genes in abundance or not at all, and observed how their retinal cells’ life cycles changed by tracking which genes were turned “on” at any given time in the computer program. They found that cells expressing increased levels of the NFI genes acted older than they were and produced more of the corresponding cell types (glial cells) than normal retinal progenitors. In contrast, progenitors without the NFI genes continued to create earlier cell types, such as rod photoreceptors, and continued to divide, acting like young progenitor cells.