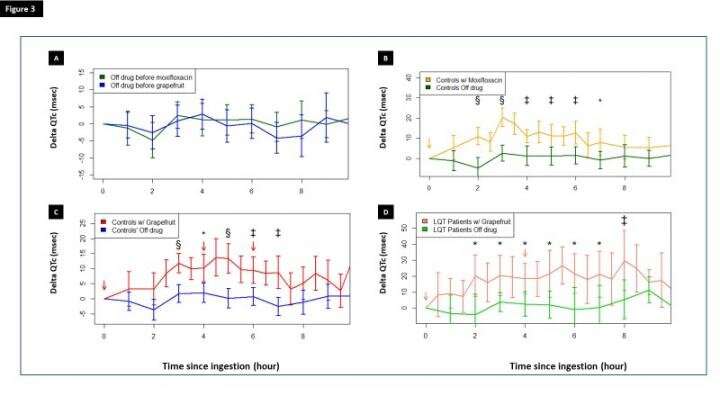 Grapefruit juice is already listed as a substance to avoid when taking QT-prolonging medications because it increases the toxicity of many drugs. Investigators have now confirmed the QT-prolonging effects of grapefruit juice in a new study and call for a stronger warning to patients who are taking QT-prolonging drugs or who have long QT syndrome because of the potential risk. They report their findings in Heart Rhythm, the official journal of the Heart Rhythm Society and the Cardiac Electrophysiology Society.

There are over 200 medications that prolong the QT interval, the time it takes for your heart muscle to recharge between beats. The list includes not only antiarrhythmic drugs, but also medications with no cardiac indications such as some antibiotics, antihistamines, and antipsychotic drugs. These drugs work mainly by blocking a specific “IKr” potassium channel on the myocardial (cardiac muscle) cell membrane, thus prolonging the repolarization in the ventricles of the heart. Abnormalities in the QT interval can also be caused by genetic conditions such as long QT syndrome.

“With so many drugs, of such varied composition blocking the IKr channel, it is reasonable to assume that food compounds may also have IKr-channel-blocker properties, raising the possibility that ‘proarrhythmic food’ exists,” explained Sami Viskin, MD, Department of Cardiology, Tel Aviv Sourasky Medical Center and Sackler School of Medicine, Tel Aviv University, Tel Aviv, Israel, who led the study. “Previous studies showed that flavonoid compounds contained in grapefruit juice have IKr channel- blocking properties. We therefore tested the possibility that grapefruit juice has QT-prolonging properties.”

Investigators tested the effects of grapefruit juice on the QT interval following the same stringent criteria used by the pharmaceutical industry to test new drugs before market release. The study was performed according to the “Guidelines for the Clinical Evaluation of QT/QTc for Non-antiarrhythmic Drugs,” namely, a randomized crossover design, accurate and blinded QT analysis. As positive control, they used moxifloxacin, an antibiotic with known, albeit small, QT-prolonging properties. Thirty healthy volunteers and ten patients with congenital long QT syndrome participated in a four-day thorough-QT-study. On days one and three, study subjects received no study drugs and underwent multiple electrocardiogram (ECG) recordings to test for the spontaneous daily variability, and spontaneous day-to-day variability of their QT interval. On days two and four, healthy participants received either moxifloxacin (one oral dose of 400 mg) or grapefruit juice (two liters in three divided doses hours apart) in random order. The patients with long QT syndrome received only grapefruit juice. 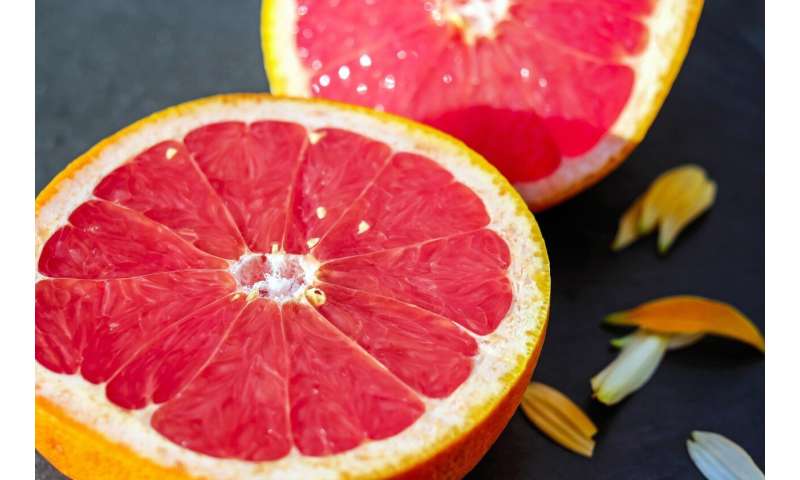 The study confirmed that grapefruit juice prolongs the QT interval. Among healthy volunteers the net QT prolongation was small, but comparable to that caused by moxifloxacin. The grapefruit-induced QT prolongation was greater in females than in males and more so in patients with congenital long QT syndrome.

Dr. Viskin and colleagues summarize the implications for patient subgroups as follow: