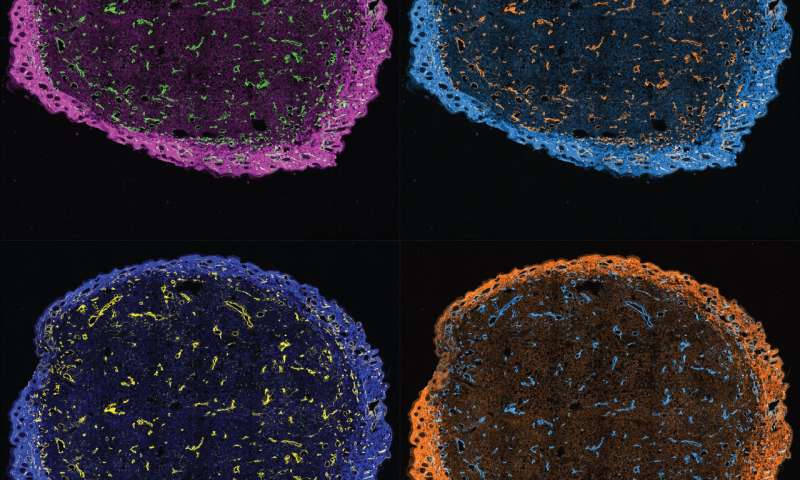 Cytokines, small proteins released by immune cells to communicate with each other, have for some time been investigated as a potential cancer treatment.

However, despite their known potency and potential for use alongside other immunotherapies, cytokines have yet to be successfully developed into an effective cancer therapy.

That is because the proteins are highly toxic to both healthy tissue and tumors alike, making them unsuitable for use in treatments administered to the entire body.

Injecting the cytokine treatment directly into the tumor itself could provide a method of confining its benefits to the tumor and sparing healthy tissue, but previous attempts to do this have resulted in the proteins leaking out of the cancerous tissue and into the body’s circulation within minutes.

Now researchers at the Koch Institute for Integrative Cancer Research at MIT have developed a technique to prevent cytokines escaping once they have been injected into the tumor, by adding a Velcro-like protein that attaches itself to the tissue.

In this way the researchers, led by Dane Wittrup, the Carbon P. Dubbs Professor in Chemical Engineering and Biological Engineering and a member of the Koch Institute, hope to limit the harm caused to healthy tissue, while prolonging the treatment’s ability to attack the tumor.

To develop their technique, which they describe in a paper published in the journal Science Translational Medicine, the researchers first investigated the different proteins found in tumors, to find one that could be used as a target for the cytokine treatment. They chose collagen, which is expressed abundantly in solid tumors.

They then undertook an extensive literature search to find proteins that bind effectively to collagen. They discovered a collagen-binding protein called lumican, which they then attached to the cytokines.

“When we inject (a collagen-anchoring cytokine treatment) intratumorally, we don’t have to worry about collagen found elsewhere in the body; we just have to make sure we have a protein that binds to collagen very tightly,” says lead author Noor Momin, a graduate student in the Wittrup Lab at MIT.

To test the treatment, the researchers used two cytokines known to stimulate and expand immune cell responses. The cytokines, interleukin-2 (IL-2) and interleukin-12 (IL-12), are also known to combine well with other immunotherapies.

Although IL-2 already has FDA approval, its severe side-effects have so far prevented its clinical use. Meanwhile IL-12 therapies have not yet reached phase 3 clinical trials due to their severe toxicity.

The researchers tested the treatment by injecting the two different cytokines into tumors in mice. To make the test more challenging, they chose a type of melanoma that contains relatively low amounts of collagen, compared to other tumor types.

They then compared the effects of administering the cytokines alone and of injecting cytokines attached to the collagen-binding lumican.

“In addition, all of the cytokine therapies were given alongside a form of systemic therapy, such as a tumor-targeting antibody, a vaccine, a checkpoint blockade, or chimeric antigen receptor (CAR)-T cell therapy, as we wanted to show the potential of combining cytokines with many different immunotherapy modalities,” Momin says.

“So we were able to show that these combinations are synergistic, they work really well together, and that cytokines attached to lumican really helped reap the full benefits of the combination,” Momin says.

The researchers now plan to carry out further work to improve the technique, and to explore other treatments that could benefit from being combined with collagen-binding lumican, Momin says.

Ultimately, they hope the work will encourage other researchers to consider the use of collagen binding for cancer treatments, Momin says.