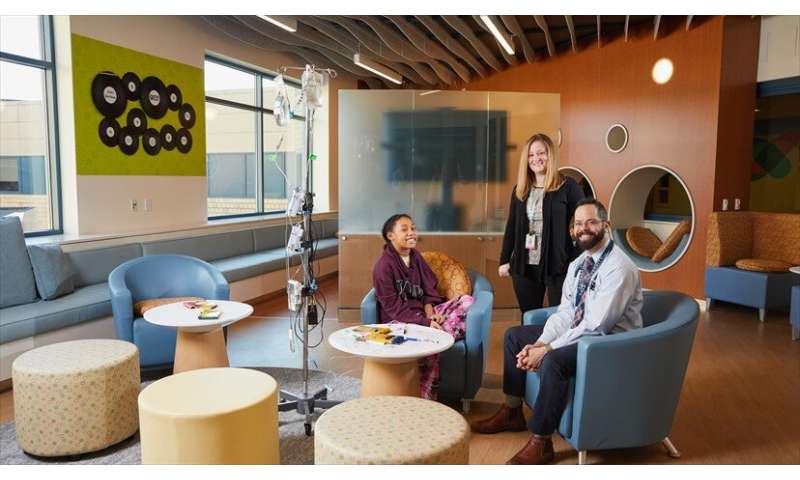 As if adolescence isn’t difficult enough, imagine the many complicated feelings around being diagnosed with five cancers starting at age 11, resulting in needing to have your left leg amputated at age 14.

That was what it was like to be Amanda Garbatini, now 32. Over a 20-year time span, she was treated at Yale New Haven Children’s Hospital and Smilow Cancer Hospital for rhabdomyosarcoma; chondrosarcoma, which claimed part of her right lung and a rib; clear-cell carcinoma of the kidney; leiomyosarcoma; and breast cancer. All were caused by Li-Fraumeni Syndrome, a rare genetic condition that makes her more cancer-prone than most people.

She survived them all. Now, five years cancer-free, she’s focused on helping other teens in tough situations as the Adolescent/Young Adult Program coordinator for Yale New Haven Children’s Hospital and its new teen center.

“I was going into middle school when I was diagnosed,” she says. “I was having all those really horrible adolescent changes, and then on top of it, I had cancer.” She stayed in her hospital room with her curtains drawn, lights off, and door closed. “There was a playroom at the children’s hospital,” she says, “but it was geared towards younger kids; I didn’t really belong in that room.”

Feeling out of place was also a problem for cancer survivor and Yale University student Lauren Telesz, 21, of Fairfield. In 2013, at age 15, she was diagnosed with Hodgkin’s lymphoma and treated at Yale New Haven Children’s Hospital, where she felt too old to take part in the programming for younger children. “The clowns had just left,” says Telesz. “I was sitting in bed scrolling through my phone. All my friends were getting ready for homecoming. I felt like the only teen in the world with cancer.”

Once she recovered, Telesz wanted to help ease that loneliness for other teens with cancer. A teacher arranged for her to meet Joel E. Smilow, benefactor of the Smilow Cancer Center, and tell him about her experience. Their conversation inspired the new Lauren Telesz/Smilow Teen Center. It’s a modern, vibrant place for adolescents and younger adults with cancer (or any diagnosis) to hang out and connect with others in similar circumstances. The center is equipped with gaming systems, as well as a virtual reality headset, a teen favorite.

“When adolescents and young adults are diagnosed with cancer, they sometimes end up being unable to relate to their peers, who are not dealing with such serious things,” says Asher Marks, MD, director of the Adolescent and Young Adult Program. He is also a pediatric hematologist and medical oncologist at Yale Medicine who helped create the teen center along with section chief Gary Kupfer, MD. “They crave interaction with other teenagers in the same situation.”

Forging these relationships is important socially and also medically. “We now know from research that patients without solid psychosocial support networks tend to do worse, prognosis-wise,” Dr. Marks says. “There’s more depression, more anxiety, less compliance. And so, there actually is an effect on medical outcome.”

A space of their own, a commitment to survival

The teen center dovetails with a larger goal to help improve survival rates for adolescents and young adults with cancer. Although cancer is rare among adolescents and young adults, it is the leading cause of disease-related death for this age group. Not quite children or adults, they are treated by either pediatric or adult oncologists who specialize in the type of cancer they have. This can mean receiving treatment in children’s hospitals for cancers that typically affect children (such as leukemia) or in adult centers for cancers more often seen in older people (like breast cancer). This teen center helps bring these patients together to share their common experience, regardless of where in the hospital they’re being treated, Dr. Marks says.

Nationwide, adolescent and young adult cancer survival rates are lagging for people ages 13 to 30, says Dr. Marks. “If you look at cure rates over the years, we’ve definitely seen improvements in patients who are 50 to 60 years old, and in pediatrics, we’ve seen huge survival improvements over the past few decades. But, for the teens and young adults, that hasn’t happened,” he says.

There are a few reasons for this. “One of the biggest is the fact that most clinical trials are not designed for these age groups, and so they’re not being enrolled in trials that could provide life-saving treatments.” Cancer clinical trials allow patients to try revolutionary treatments and drugs that aren’t available yet to everyone, but fewer teens currently participate in them. “Sometimes that’s due to their not being offered trials, and sometimes it’s due to patients with pediatric cancers being treated in adult centers because they’re 18 years or older, and sometimes it’s simply a lack of availability of those trials,” says Dr. Marks. He and Ranjit Bindra, MD, a radiation oncologist at Yale Medicine, are running a national clinical trial for adolescents who have a brain tumor with a specific mutation that was previously thought to only occur in adults.

Additionally, he notes, adolescent and young adult cancers are challenging to treat. “Nothing seems to be run-of-the-mill in adolescent and young adult cancers,” Dr. Marks says. “The cancers can be more aggressive when they initially present, and/or unusual in terms of histology (cell structure) or of mechanism. These are all things that we’re just starting to figure out.”

Another challenge for teens with cancer is that their overall good health means that cancer may also initially be overlooked. “They’re not expecting it—their parents aren’t expecting it—and I think that physicians aren’t always looking out for it. So, that can delay cancer diagnosis,” adds Dr. Marks.

Once out of high school, young adults may not seek out regular, preventative health care. Says Dr. Marks, “You see them sometimes bounce around to urgent care clinics and not have a solid primary care doctor who can follow the trend and say, ‘You know, there’s something else off here.'”

A place for teens and young adults with cancer

The center is the only one of its kind here in Connecticut and one of just a handful nationally. Sponsors include Joel E. Smilow, Teen Cancer America, Game Changer, Child’s Play, Smiles for Smilow, Scott and Susan Telesz, Nancy and Fouad Hassan, and Don’s Hat Rack.

“Places like this help teens get together, and it gives us the space to provide programming that we otherwise couldn’t do,” says Garbatini.

What Garbatini enjoys most about being here and helping adolescents and young adults is paying it forward—and getting younger patients out of their hospital rooms.

“I am able to share my story with the kids if they’re opening up,” she says. “I can say, ‘You know, I used to be here, too.’ And I can have that kind of connection with them, knowing we’re all making their time here better.”

In the end, the Lauren Telesz/Smilow Teen Center is trying to fill a gap and make a difference in these people’s lives.