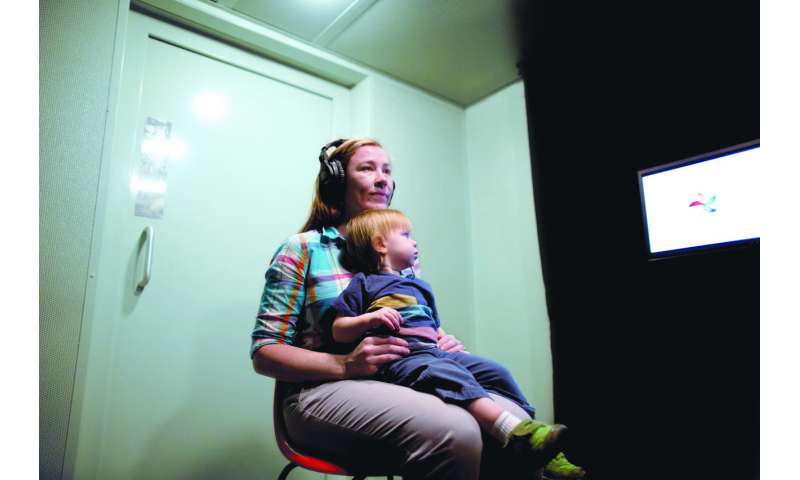 Infants may be more sensitive to non-native speech sounds than previously thought, according to a study published in the Journal of Memory and Language. The findings shed light on the way babies begin to understand language.

The study, coauthored by Jessica Hay, an associate professor in the University of Tennessee, Knoxville’s Department of Psychology, and Ryan Cannistraci, a Ph.D. student in experimental psychology, looks at how lexical tones can affect an infant’s ability to associate words with objects.

Lexical tone is the manipulation of a word’s pitch contour. Although English words do not make use of pitch contours within words to convey meaning, many languages—such as Mandarin Chinese, Cantonese, and Thai—do.

For example, by changing the pitch contour, the Mandarin word ma can mean either “mother,” “horse,” “hemp,” or “to scold.”

What differentiates Hay and Cannistraci’s study from others in the field of infant language learning is its focus on these non-English sound structures.

“Most research on early word learning has focused on what is referred to as intonation languages, where pitch changes are used at the phrase level but not to mark changes in word meaning,” Hay said. “However, over half of the world’s languages use pitch contours to communicate meaning.”

The researchers based their experiments on a cognitive skill called task switching—the ability to unconsciously shift attention between different tasks. The research involved presenting 14-month-old subjects with two novel objects paired with a novel pseudoword. The babies had English as their primary household language.

Once the infant was used to the association between the object-label pairs they underwent two sets of trials. In the “same” trials, infants were presented with objects along with their correct label. In the “switch” trials, the labels were reversed. By measuring average attention for both trial types, researchers were able to gauge whether the subjects had truly learned the object-label association.It may seem intuitive that the infants would have an easier time discerning between two objects when the labels differ greatly in tone, but this is not always the case.

In fact, the researchers found that the babies were able to learn the association between an object and its label more easily when they heard a sound with a high-pitch contour, just as babies that have Chinese as a primary household language would hear.

The experiments pave the way for a more inclusive approach to understanding how language is learned.