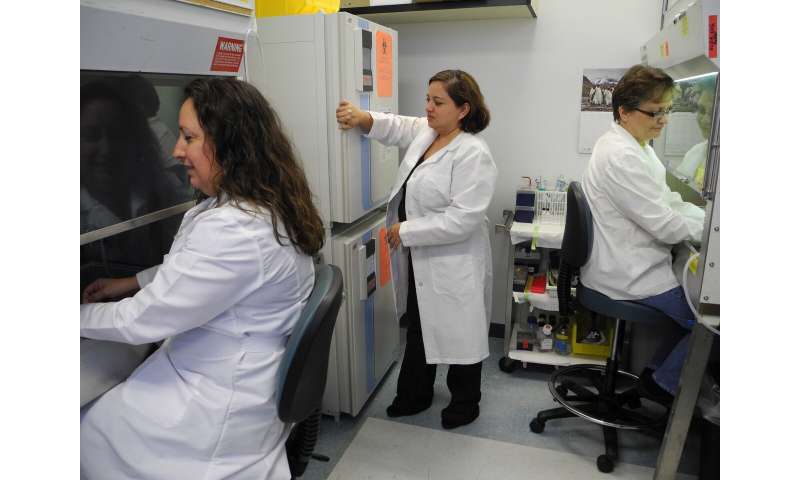 The oceans cover more than 70 percent of the earth’s surface and provide a rich source of unique, bioactive natural products. Their chemical diversity and structural complexity represent an untapped supply of potential new drugs, lead compounds for medicinal chemistry and biological probes to better understand diseases. More than 50 percent of cancer drugs currently used have originated from natural products.

Researchers from Florida Atlantic University’s Harbor Branch Oceanographic Institute have received $801,000 from the Florida Department of Health’s Bankhead Coley Cancer Research Program for a project to investigate the use of marine natural compounds as potential treatments of triple negative breast cancers.

The objective of the project, “Discovery of Marine Natural Products Active Against Triple Negative Breast Cancers Using 3-D-spheroid Cultures; an In Vivo Relevant Assay Platform,” is to discover compounds from the extensive marine natural products library at FAU Harbor Branch that can induce programmed cell death (apoptosis) in triple negative breast cancer cells grown as spheroids. Cells grown as spheroids more closely mimic tumors, and thus compounds identified through this screening effort are expected to be more easily translated to the clinic.

The researchers hope to identify clinically active compounds that will revolutionize treatment regimens and provide more effective treatment options, with less side effects, and greater survival rates. The five-year survival rate for triple negative breast cancers is about 77 percent compared to 93 percent for other breast cancer types.

“There are limited treatment options available for triple negative breast cancers because they do not respond to targeted therapies,” said Esther Guzmán, Ph.D., principal investigator of the study and an associate research professor of cancer cell biology at FAU Harbor Branch. “We believe that compounds with the novel activity of inducing apoptosis in triple negative breast cancer cell spheroids can be found among secondary metabolites obtained from marine organisms. These compounds could potentially be developed as novel therapeutics to treat this form of cancer or to serve as probes to expand our understanding of this disease.”

For more than a decade, FAU Harbor Branch researcher Amy Wright, Ph.D., a research professor of natural products chemistry and co-investigator in this project, has developed libraries of natural compounds isolated from marine organisms (the HBOI-enriched fraction library and the HBOI pure compound library). These libraries are tested against a variety of diseases both by Guzmán and other collaborators at the FAU Harbor Branch campus in Ft. Pierce and at partner laboratories throughout the country. Once an activity is discovered, bioassay-guided fractionation is used to purify the bioactive natural products. These marine organisms—many of them from deep-water habitats—come primarily from around the Atlantic and Caribbean; others have come from the Galapagos, western Pacific, Mediterranean, Indo-Pacific, Western Africa and the Bering Sea. FAU Harbor Branch researchers are looking for treatments for cancer and infectious diseases, and also have collaborations with other scientists working on other forms of cancer, malaria, tuberculosis, neurodegenerative diseases and inflammation.

“Our scientists have developed a very unique library of pure and highly enriched fractions derived from marine organisms and deep-water marine invertebrates that only can be found at Florida Atlantic University’s Harbor Branch Oceanographic Institute,” said James M. Sullivan, Ph.D., executive director of FAU Harbor Branch, one on the university’s four research pillars. “This latest grant from the Florida Department of Health awarded to Dr. Guzmán and Dr. Wright will expand the scope of our cancer research and enable our scientists to develop other treatment options for one of the most aggressive forms of breast cancer.”

Cancer cells that are grown in spheroid conditions (3-D-cultures) allow the cells to interact with each other and the extracellular matrix, which provides a better representation of the in vivo environment than traditional 2-D cultures. Guzmán and her team will use a multi-parametric cell-based assay that uses high content imaging to measure cell number, induction of apoptosis, and viability in two triple negative breast cancer cell lines grown as spheroids.

Guzmán previously established and validated the assay by screening a small subset of about 150 fractions from the enriched fraction library as well as a small subset of pure compounds with funding from a pilot project grant awarded by the Harbor Branch Oceanographic Foundation from the proceedings of the sale of the “Florida Save our Seas License Plate.” Lead compounds from this project will undergo advanced genomic and proteomic differential profiling to increase understanding of their cellular effects and potential mode of action. It may also provide insight as to why compounds are active only against cells grown as spheroids, which may help researchers find better compounds to treat this and other aggressive forms of cancer.