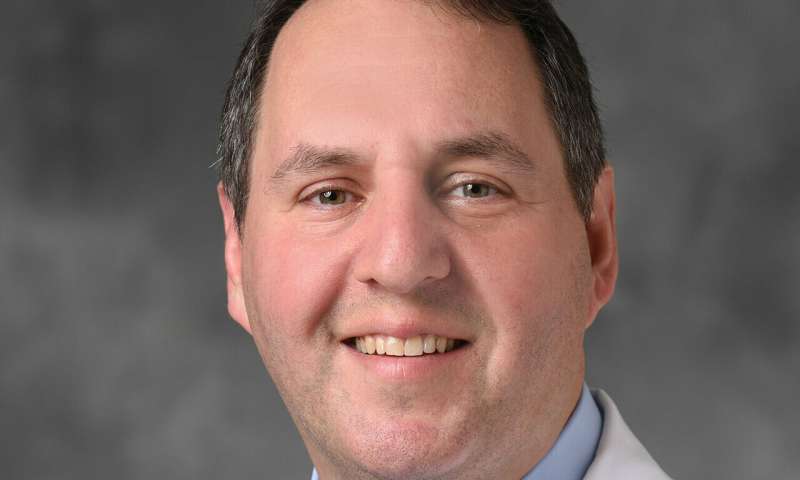 A 32-year-old man is the first in Michigan with a complete Deep Brain Stimulation (DBS) system surgically implanted for the treatment of epilepsy. Neurosurgeon Jason Schwalb, M.D., with help from the team at the Henry Ford Comprehensive Epilepsy Center, implanted targeted electrodes in Steven Rennie’s brain on Feb. 12, and a pacemaker-like device known as an internal pulse generator in his chest on Feb. 28.

The electrodes are attached to the internal pulse generator, their power source, via thin extension cords below the skin. Together, these components make a complete DBS system – something that provides hope for Rennie, who has not seen a significant reduction in symptoms from other epilepsy treatments.

Rennie’s journey with epilepsy began at age 24 when he experienced his first seizure while sleeping. His mother discovered him having the seizure, and she quickly rushed him to the nearest emergency room. He spent the next year seizure-free before having his second on Oct. 30, 2012—exactly one year to the day after his first.

Shortly afterward, he was diagnosed with epilepsy.

In the time since his diagnosis, Rennie has experienced more than 200 seizures, sometimes up to eight in one day. While some are severe and debilitating, others are so mild that he isn’t aware he is having a seizure.

“The seizures can be very hit-or-miss,” Rennie explained. “I underwent surgery to place electrodes on my brain at Henry Ford Hospital so my doctors could monitor my brain activity when a seizure happened. For two weeks, I did not have a single seizure. I then had to go back to the operating room to have the electrodes removed. The day after I went home, I had one.”

For many epilepsy patients, medication or a Vagus Nerve Stimulator can provide a significant reduction in the frequency and severity of seizures. For Rennie, these provided only moderate relief, and it was clear that he needed a different option. Thanks to the FDA’s approval of anterior nucleus of the thalamus (ANT)- DBS for the treatment of localization-related epilepsy, and the highly-skilled team at the Henry Ford Comprehensive Epilepsy Center, Rennie now has a promising alternative to the treatments he has previously tried.

“From the initial clinical trial that was done in the U.S., long-term results showed that 70 percent of patients had a greater than 50 percent reduction in how frequently they were having seizures,” Dr. Schwalb explained. “We are optimistic that Mr. Rennie will see significant improvement from DBS. However, it may take a couple years to determine exactly how effective DBS is for him.”

The ideal treatment for localized-related epilepsy that does not respond to medication or Vagus Nerve Stimulation is resective surgery to remove the part of the brain causing the seizures. Unfortunately, this is a far-underutilized option.

In Rennie’s case, tests have not been able to determine exactly where within the brain his seizures originate from, ruling out the possibility of resective surgery.

“In the U.S., there are 100,000 patients every year who would benefit from epilepsy surgery, but there are only 4,500 epilepsy surgical procedures performed each year,” Dr. Schwalb said. “Less than five percent are getting the appropriate surgery. For a patient who has three grand mal seizures per year, the likelihood that the patient will die from epilepsy within a decade is 15 percent. That’s higher than some cancers.”

Anyone who has two or more seizures per year with altered levels of consciousness – not knowing what is going on, or not remembering what happened during the seizures – after two appropriately chosen medications at appropriate doses, should be considered for epilepsy surgery, Dr. Schwalb explained.

If surgery is not an option, such as in Rennie’s case, treatments such as DBS may significantly improve symptoms and reduce the damage done by seizures.

Hope for the Future

Now that Rennie has a completed DBS system implanted, he looks forward to seeing what this can do for him and others who share a similar battle.