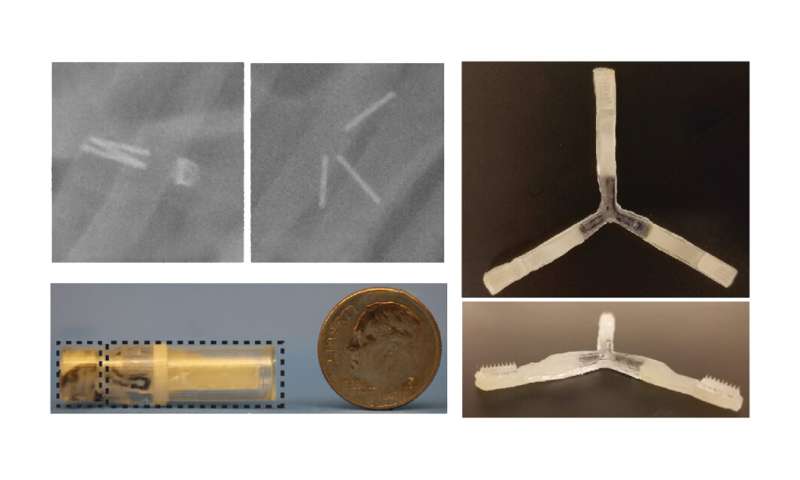 Many drugs, especially those made of proteins, cannot be taken orally because they are broken down in the gastrointestinal tract before they can take effect. One example is insulin, which patients with diabetes have to inject daily or even more frequently.

In hopes of coming up with an alternative to those injections, MIT engineers, working with scientists from Novo Nordisk, have designed a new drug capsule that can carry insulin or other protein drugs and protect them from the harsh environment of the gastrointestinal tract. When the capsule reaches the small intestine, it breaks down to reveal dissolvable microneedles that attach to the intestinal wall and release drug for uptake into the bloodstream.

“We are really pleased with the latest results of the new oral delivery device our lab members have developed with our collaborators, and we look forward to hopefully seeing it help people with diabetes and others in the future,” says Robert Langer, the David H. Koch Institute Professor at MIT and a member of the Koch Institute for Integrative Cancer Research.

In tests in pigs, the researchers showed that this capsule could load a comparable amount of insulin to that of an injection, enabling fast uptake into the bloodstream after the microneedles were released.

Langer and Giovanni Traverso, an assistant professor in MIT’s Department of Mechanical Engineering and a gastroenterologist at Brigham and Women’s Hospital, are the senior authors of the study, which appears today in Nature Medicine. The lead authors of the paper are recent MIT Ph.D. recipient Alex Abramson and former MIT postdoc Ester Caffarel-Salvador.

Langer and Traverso have previously developed several novel strategies for oral delivery of drugs that usually have to be injected. Those efforts include a pill coated with many tiny needles, as well as star-shaped structures that unfold and can remain in the stomach from days to weeks while releasing drugs.

“A lot of this work is motivated by the recognition that both patients and health care providers prefer the oral route of administration over the injectable one,” Traverso says.

Earlier this year, they developed a blueberry-sized capsule containing a small needle made of compressed insulin. Upon reaching the stomach, the needle injects the drug into the stomach lining. In the new study, the researchers set out to develop a capsule that could inject its contents into the wall of the small intestine.

Most drugs are absorbed through the small intestine, Traverso says, in part because of its extremely large surface area —- 250 square meters, or about the size of a tennis court. Also, Traverso noted that pain receptors are lacking in this part of the body, potentially enabling pain-free micro-injections in the small intestine for delivery of drugs like insulin.

To allow their capsule to reach the small intestine and perform these micro-injections, the researchers coated it with a polymer that can survive the acidic environment of the stomach, which has a pH of 1.5 to 3.5. When the capsule reaches the small intestine, the higher pH (around 6) triggers it to break open, and three folded arms inside the capsule spring open.

Each arm contains patches of 1-millimeter-long microneedles that can carry insulin or other drugs. When the arms unfold open, the force of their release allows the tiny microneedles to just penetrate the topmost layer of the small intestine tissue. After insertion, the needles dissolve and release the drug.

“We performed numerous safety tests on animal and human tissue to ensure that the penetration event allowed for drug delivery without causing a full thickness perforation or any other serious adverse events,” Abramson says.

To reduce the risk of blockage in the intestine, the researchers designed the arms so that they would break apart after the microneedle patches are applied.

In tests in pigs, the researchers showed that the 30-millimeter-long capsules could deliver doses of insulin effectively and generate an immediate blood-glucose-lowering response. They also showed that no blockages formed in the intestine and the arms were excreted safely after applying the microneedle patches.

“We designed the arms such that they maintained sufficient strength to deliver the insulin microneedles to the small intestine wall, while still dissolving within several hours to prevent obstruction of the gastrointestinal tract,” Caffarel-Salvador says.

Although the researchers used insulin to demonstrate the new system, they believe it could also be used to deliver other protein drugs such as hormones, enzymes, or antibodies, as well as RNA-based drugs.