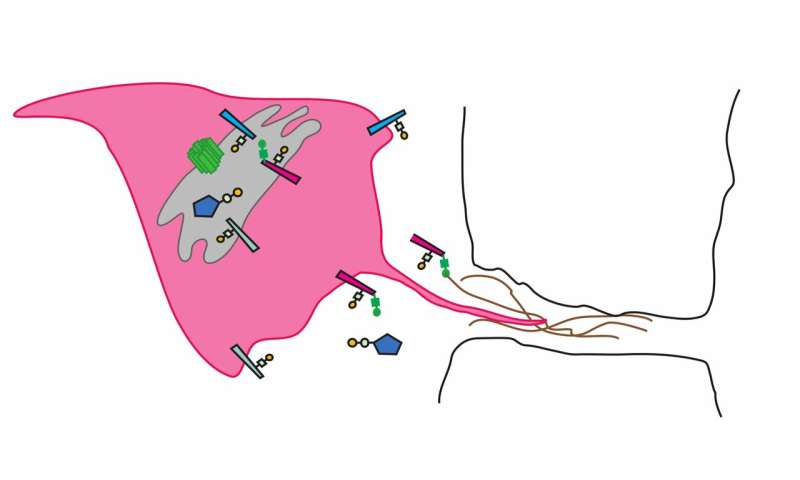 Cancers that display a specific combination of sugars called T-antigens are more likely to spread through the body and kill a patient. However, scientists do not understand what regulates the appearance of T-antigen in cancer cells, the set of proteins modified with T-antigen, and the roles the T-antigen and the modified proteins play during metastasis.

A new study by Daria Siekhaus and her group at the Institute of Science and Technology Austria (IST Austria), including first authors Katarína Valošková and Julia Biebl, has identified a new gene in the fruit fly Drosophila that is required for regulating the addition of T-antigen onto a subset of proteins in immune cells. As the gene mutation causes immune cells to adhere in the fly’s head, the team called the new gene Minerva, after the Roman goddess of wisdom who burst from her father Jupiter’s head. The study, published today in eLife, is a first step toward understanding new ways in which sugar modifications may be involved in metastasis.

The fruit fly as an engine for discovery

Cancer cells metastasize by leaving their initial tumor site and squeezing between other cells to enter blood vessels, which they use as highways to zoom through the body. The metastasizing cells again squeeze between other cells to leave the blood vessels and enter tissues to form metastases. T-antigen, a combination of specific sugars, is detected on proteins on metastasizing human cancer cells, but is not normally found in most adult tissues. As immune cells in the fly, called macrophages, also carry T-antigens and squeeze through other cells to enter tissues, Daria Siekhaus and her group decided to use the fly and its immune cells as a model to study how the appearance of T-antigen on proteins is regulated and which proteins are affected by this. “The fruit fly is the best place to identify new pathways, as it is fast to do complex genetic experiments in the fly. Here again, we used the fly as an initial discovery engine for a problem that is also pertinent to us humans,” Daria Siekhaus explains.

Initially, the team cast a wide net to identify potential genes. “We looked through the gene database for flies to find a gene that is active at the right time and in the right place: a gene that is active in macrophages when T-antigen is added, and that works in the Golgi apparatus, where sugars like the T-antigen are added to proteins before they get transported to the cell surface.” Once the group had found such a candidate gene, known then only by the placeholder “CG8602,” they tested its role in the appearance of the T-antigen. When CG8602 is mutated, the researchers found that the level of T-antigen on the macrophages is reduced. The macrophages also do not, as they usually do, exit the head region of the fly embryo and enter other tissues. In keeping with the traditions of the Drosophila field in which genes are named in some evocative way that refers to the changes seen when the gene is mutated, the group called the gene “Minerva,” after the Roman goddess of wisdom. According to Ancient Roman myths, Minerva’s pregnant mother turned into a fly and was swallowed by her father Jupiter. After her birth, Minerva was initially trapped in Jupiter’s head until she burst out in full battle armor.

The researchers investigated which proteins Minerva affects T-antigen on. By collaborating with Sergey Vakhrushev and Henrik Clausen at the University of Copenhagen, the group had access to a mass-spectrometry technique that let them find which proteins carry the T-antigen sugars when Minerva is present but show reduced levels when Minerva is mutated. They thus identified a set of proteins which need Minerva to display T-antigen. The large majority of the proteins identified that have a version in vertebrates, a so-called ortholog, are involved in cancer. “Nine of the proteins we found have an ortholog in humans, six of these are linked to cancer in some way. This is intriguing!”, Siekhaus says.