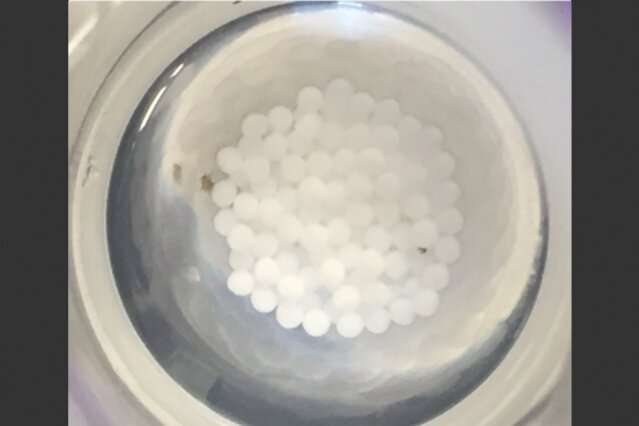 Transplanting pancreatic islet cells into patients with diabetes is a promising alternative to the daily insulin injections that many of these patients now require. These cells could act as a bioartificial pancreas, monitoring blood glucose levels and secreting insulin when needed.

For this kind of transplantation to be successful, scientists need to make sure that the implanted cells receive enough oxygen, which they need in order to produce insulin and to remain viable. MIT engineers have now devised a way to measure oxygen levels of these cells over long periods of time in living animals, which should help them predict which implants will be most effective.

In a paper appearing in the Proceedings of the National Academy of Sciences the week of Feb. 25, the researchers demonstrated that they could use this method, a specialized type of magnetic resonance imaging (MRI), to track how oxygen levels of implanted cells in the intraperitoneal (IP) cavity of mice change as they move through the cavity over a prolonged period of time.

“Our goal is to make living cellular factories that can supply drugs on demand for patients. The ability to track the oxygen supply and the location of implanted cells will help us better understand how to build and use successful therapies,” says Daniel Anderson, an associate professor in MIT’s Department of Chemical Engineering, a member of MIT’s Koch Institute for Integrative Cancer Research and Institute for Medical Engineering and Science (IMES), and the senior author of the study.

For the past several years, Anderson, Langer, and their colleagues have been developing implantable islet cells encapsulated in particles made of alginate, a starchy molecule naturally found in algae. Such particles could be used to replace the pancreatic islet cells of people with Type 1 diabetes, which do not function properly.

In an earlier study, the researchers found that larger particles, with a diameter of 1.5 millimeters, maintain their function longer than smaller particles (0.5-millimeter diameter), in part because the smaller particles tend to become surrounded by scar tissue, which blocks their access to oxygen.

However, questions still remained about the role of oxygen in the fate of these implanted cells. The particles can move through the IP space once implanted, which makes tracking them and their oxygen exposure important. Different parts of the IP space contain varying levels of oxygen, and previous studies had shown that the smaller particles tend to cluster in patches of fat, which have less oxygen, contributing to their failure.

Optical microsensors that are typically used for measuring oxygen levels in living tissue are very fragile and invasive, so the MIT team decided to try an alternative approach: fluorine MRI, a previously developed technique that other researchers have used to track living cells. While traditional MRI measures interactions between a magnetic field and hydrogen nuclei, fluorine MRI can measure similar interactions between a magnetic field and fluorine nuclei, as well as how these interactions are affected by the presence of oxygen.

To perform the study, the researchers incorporated a fluorine-containing material called a perfluorocarbon emulsion into the alginate that they normally use to encapsulate their islet cells. They tested particles with diameters of 0.5 and 1.5 millimeters, in both diabetic and nondiabetic mice. The nondiabetic mice received alginate implants with no cells inside, while the diabetic mice received implants with pancreatic islet cells.

The researchers then used fluorine MRI to measure oxygen levels in the IP space over a three-month period. At the same time, they also measured the diabetic mice’s blood glucose levels. To help them analyze the resulting data, the researchers used a machine-learning algorithm to go through all of the images and find associations between the positions of the capsules within the IP space, the oxygen levels, and the blood glucose levels of the mice.

“These kind of imaging studies involve a lot of data, and screening all of these 2-D images and making decisions about how the position of the capsules affects oxygen concentration is extremely challenging and very error prone when it’s done by a human observer,” Spanoudaki says. “So we relied on machine learning to automatically go through the images and find associations between the positions of the capsules and other parameters.”

This analysis revealed that the smaller capsules produce enough insulin to treat diabetic mice during the first 30 days of treatment, but then tend to organize in large clusters and accumulate in the fatty areas of the animals’ extremities. Once the particles become stuck in these oxygen-deprived regions, blood glucose levels rise in the mice.

The larger capsules tended to spread out over a larger area, so that some ended up in low-oxygen areas and others in high-oxygen areas. Overall, the cells secreted enough insulin to keep the diabetic mice’s blood glucose levels stable over several months.

Gordon Weir, the co-head of the Joslin Diabetes Center’s section on islet and regenerative biology, says the study sheds light on important issues regarding the optimal size of the alginate capsules used to deliver islet cells.

“The MIT group has previously shown the better transplant results in mice (and non-human primates) using capsules with a diameter of 1.5 millimeters compared with 0.5 millimeters,” says Weir, who was not involved in the research. “Now with this remarkable technique, we can see what we suspected: that the smaller capsules tend to clump more easily, which results in a more hypoxic environment that leads to impaired insulin secretion and more cell death.”

Toward a bioartificial pancreas

Sigilon Therapeutics, a company started by Langer, Anderson, and others to further develop the bioartificial pancreas, hopes to begin testing implantable islet cells in patients early next year, Anderson says. The new oxygen measurement technique could potentially be adapted for use in larger animals, including humans, which could help guide the development of future versions of the encapsulated islets, the researchers say.

“Based on measurements in larger animals, we would like to understand whether there are different ways to design the bioartificial pancreas, so that this aggregation of capsules that potentially results in reduced oxygen does not happen,” Spanoudaki says. “We are hoping to use this as a guide to make better designs for the bioartificial pancreas.”