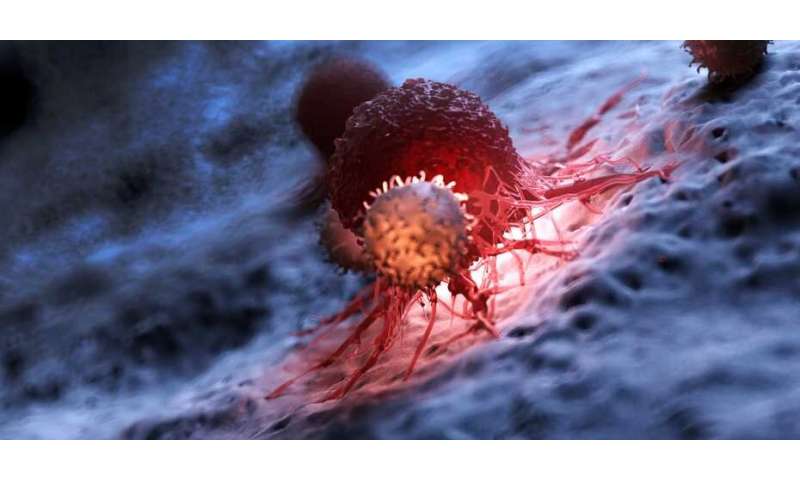 Researchers at ETH Zurich have discovered redundancies in the biochemical signalling pathways of immune cells. This finding has important implications for advances in cancer immunotherapy, among other areas.

Oncologists have had great success with cancer immunotherapy in recent years, especially with the approach known as immune checkpoint inhibition, which was recognised with last year’s Nobel prize for medicine. Tumour cells have the ability to curb the activity of patients’ own T cells, causing the T cells to leave the tumour alone. To do this, they use a molecular “handshake”, where molecules on the surface of tumour cells interact with checkpoint molecules, as they are known, on the surface of T cells. However, if patients are administered particular antibodies (checkpoint inhibitors) that render this interaction impossible, the T cells can attack and eliminate the tumour.

One of the key checkpoint molecules is PD-1. Until now, there had been little research into just how the PD-1 handshake signal is transmitted within T cells to prevent the cells being activated. A team of scientists at ETH Zurich and Aix-Marseille University has now taken a closer look at important molecules in the biochemical signalling pathway of PD-1, including the enzyme SHP-2.

Cancer researchers are targeting this enzyme to further increase the efficacy of cancer immunotherapy. The scientists in Zurich and Marseille have now shown that when SHP-2 is lacking, a related molecule, SHP-1, performs its role. “SHP-1 and SHP-2 can replace each other,” says Peter Blattmann, a postdoc in the group led by Matthias Gstaiger, Senior Scientist at the Institute of Molecular Systems Biology at ETH Zurich. “So it’s not enough to attack just one of these molecules—you have to target both simultaneously.”

“Investigating how T cells transmit checkpoint molecule signals internally holds potential not only for cancer research, but also immunology in general,” Gstaiger says. “We’re dealing with molecules that activate immune cells and molecules that inhibit those cells. Like yin and yang, these molecules maintain the equilibrium in the immune system and prevent immune reactions from getting out of hand.”