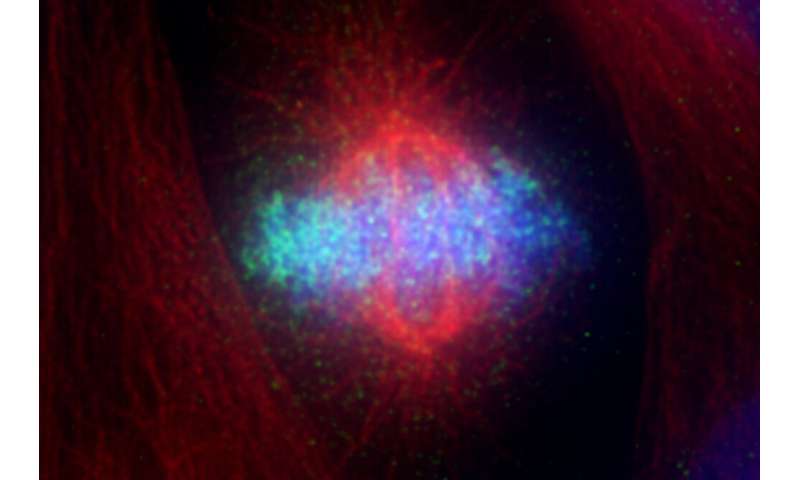 When chemotherapy was first invented, its premise seemed relatively simple: to curb the growth of tumors by stopping their cells from proliferating. Today, many of these drugs are known to act through different mechanisms, and have turned out to be useful only in certain tumor types and patients.

Consider the case of Taxol, a common chemotherapy compound used to treat a host of tumor types. The drug is known to interfere with cell division, but it doesn’t produce the intended effect in every patient—suggesting that its mechanism of action is more complex than previously appreciated.

Now, Rockefeller scientists present a new way of understanding how Taxol works—and why it may not work in some cancer cells. Their findings might point to new ways of predicting which patients are likely to benefit from the drug, potentially opening doors to more personalized treatment approaches.

Hironori Funabiki and his colleagues did not set out to troubleshoot cancer treatments, however. “We started by asking a basic science question about how cell division normally happens,” he says.

Specifically, the researchers were interested in the activity of a molecule called cGAS, which is responsible for detecting foreign invading DNA, such as infecting virus DNA, and alerting the immune system. A cell’s own DNA is normally hidden inside the nucleus, so if DNA is found elsewhere, molecular alarm bells go off that signal a foreign invader.

Why this system works isn’t obvious, however. When a cell divides, its nucleus momentarily disappears—and during this interval, DNA is exposed as it would be after a viral attack, an event that conceivably could trigger erroneous cGAS activity.

Published in Cell, the researchers found that cGAS is held captive during this interval by structures called nucleosomes, which organize chromosomes. When tethered to nucleosomes, cGAS cannot be effectively activated by DNA, so the molecular cascade that alerts the immune system to a foreign invader cannot be triggered.

Funabiki’s team now had an answer to how cGAS function is regulated in cell division—but new questions had cropped up, as well. In the course of his experiments, Christian Zierhut, a research associate in Funabiki’s lab, had noticed something odd about cells arrested in mitosis with Taxol—a slow activation of cGAS pathway signals. “We thought the build-up of cGAS signals could be serving some function and had a hunch it might be related to the cells’ ultimate destiny,” he says.

Cells exposed to Taxol have two choices: they can produce aberrant daughter cells through a process known as slippage, or they can die. The researchers found that, following exposure to Taxol, cells with high levels of cGAS tended to die through a process called apoptosis. By contrast, cells lacking cGAS survived the treatment by entering the slippage state. This difference in response to the chemical, the researchers realized, could have profound medical implications.

Collaborating with Norihiro Yamaguchi in the lab of Sohail Tavazoie, the Leon Hess Professor, the researchers tested the effectiveness of Taxol in mice with tumors. With cGAS, they found, the tumors slowed their growth; but in genetically-altered tumors that did not contain cGAS, Taxol did not have any effect.

Next, researchers analyzed cGAS activity in non-small lung cancer patients who received Taxol or other similar chemicals as part of their treatment. Patients whose tumor had high cGAS levels responded better to the drug than those with low levels. This correlation of cGAS levels with survival was not seen in patients who didn’t receive Taxol.

The scientists are now working to determine whether the correlation is causal—at this point, it’s not clear that high cGAS levels can actually improve the drug’s effectiveness—and to show that the mechanism they’ve identified in cells and mice also applies to humans. If those experiments bear out, this would suggest that cGAS is a vital component of Taxol’s ability to eliminate cancer cells.

“Choosing whether or not to treat someone with Taxol can have quite a severe impact on the patient’s quality of life,” says Funabiki. He hopes that the findings might result in better prediction tools so that people who are not likely to benefit from the treatment can be spared from its side effects.