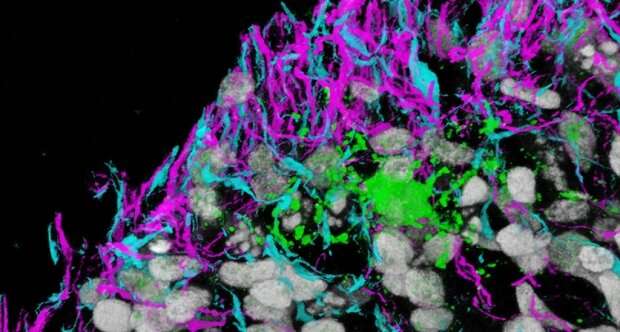 Studying human oligodendrocytes, which provide insulation for nerve cells, has been challenging. But a new way of generating stem-cell-derived, three-dimensional brain-cell cultures is paying off.

For proper brain function, it’s crucial that certain neurons be wrapped with myelin, a coating that enhances impulse transmission. Failure can spell outcomes ranging from cerebral palsy to multiple sclerosis.

A better understanding of oligodendrocytes, the brain cells that make myelin, might help correct or prevent these diseases. Yet, while cultured neurons have long been scrutinized and manipulated in efforts to pry loose their secrets, studying human oligodendrocytes has been tough. They’re born late in brain development, and they’re challenging to generate alongside human neurons and other brain cells in a way that recapitulates the complex interactions occurring among these cell types as they develop.

Now, Stanford University School of Medicine investigators have proved that a system they developed a few years ago for culturing balls of stem-cell-derived human brain cells, which mimic aspects of real brain circuitry, can generate oligodendrocytes together with neurons and a third type of brain cell called astrocytes.

“We now have multiple cell types interacting in one single culture,” said Sergiu Pasca, MD, assistant professor of psychiatry and behavioral sciences. “This permits us to look close-up at how the main cellular players in the human brain are talking to each other.”

From stem cells to oligodendrocytes

In a dish, all three cell types develop from pluripotent stem cells; arrange themselves within three-dimensional brain balls, or spheroids—much as they would in the human forebrain; progressively advance in maturity; and engage in lifelike interactions with one another. From their ringside seats, the Stanford scientists peeked in on oligodendrocytes’ movements and watched them wrap their extensions around individual neurons to form the insulating coats of myelin that, in real-life brain tissue, speed up signal transmission.

The researchers were able to determine which genes were active at different stages of oligodendrocyte development in the brain spheroids, and to show that these gene-activation patterns were extremely similar to those of real-life oligodendrocytes at comparable stages of maturation. This enabled them to pinpoint, in these cultured oligodendrocytes, the different times of onset of activation of several genes that, when mutated, cause different congenital myelination disorders—a finding with possible implications for modeling these disorders.

Many of these brain spheroids, which contain as many as 1 million cells and measure as much as one-eighth of an inch in diameter, have survived in culture for at least two years. During that time, another type of brain cell manifested. These cells, called astrocytes, outnumber neurons in the brain and perform many essential tasks, from managing nutrition and energy supplies for neurons to directing the positioning, formation and functionality of synapses, the junctions through which neurons transfer information to one another.

In the human cerebral cortex, most neurons are born by week 26 of gestation. Astrocytes begin to appear around this period and continue to mature for months afterward. Previous culture methods didn’t keep cells alive long enough to recapitulate this maturation process.

Human oligodendrocytes take even longer to make their appearance. In higher brain regions such as the cerebral cortex, responsible for advanced cognitive functions such as decision-making, scheduling and foresight, oligodendrocytes begin to form in significant numbers around the time of birth.

In the new study, the researchers modified their previous method of culturing brain spheroids by adding special growth factors and nutrients that promote oligodendrocyte formation, survival and development. By day 100 of culture initiation, oligodendrocytes were present alongside neurons and astrocytes.

Using live-imaging microscopy, Marton was able to see into brain spheroids and record the behavior of oligodendrocytes that had been labeled with a fluorescent marker. She did this extensively between days 65 and 275, monitoring different cells’ behavior by varying the microscope’s depth of field. The researchers watched oligodendrocytes migrating from their points of origin to their neuronal destinations.

When the scientists exposed the brain spheroids to a fat-dissolving emulsifier, “oligodendrocytes were affected the most,” Pasca said. “It was as though they were melting.”

Generating brain spheroids from patient-derived skin cells allows medical researchers such as Pasca to study neurological and psychiatric diseases on a personalized basis without having to obtain and maintain living brain tissue.

Pasca’s group is looking at a number of genetic disorders affecting myelination that arise in fetal development or early childhood. But oligodendrocyte-containing brain spheroids could also prove useful in studying demyelination disorders, such as multiple sclerosis and cerebral palsy—and even some psychiatric conditions not usually thought of as myelin-associated.