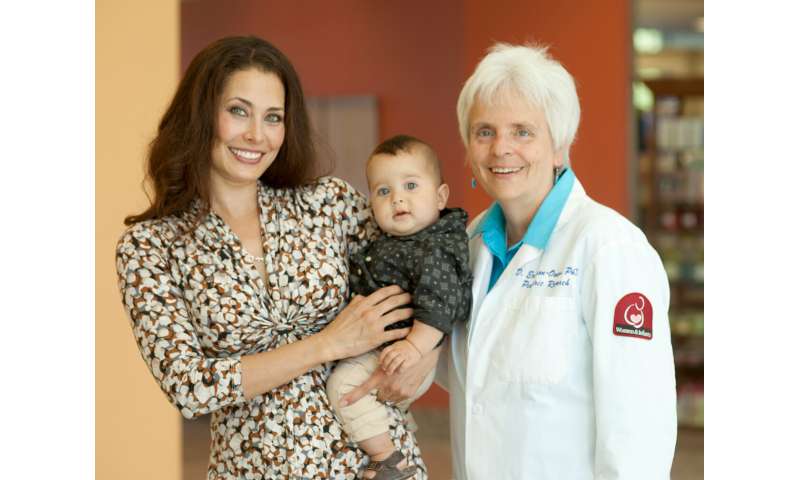 A five-minute delay in the clamping of healthy infants’ umbilical cords results in increased iron stores and brain myelin in areas important for early-life functional development, a new University of Rhode Island nursing study has found.

“When we wait five minutes to clamp the cords of healthy babies, there is a return of the infant’s own blood from the placenta, and one of the results is a return of up to 50 percent of the baby’s iron-rich blood cells,” said URI Professor of Nursing Debra A. Erickson-Owens, a certified nurse-midwife, who conducted the study with Judith S. Mercer, also a midwife and URI nursing professor emeritus. “So when the brain needs red blood cells (and iron) to make myelin, the robustness of the iron stores make a big difference,” Erickson-Owens said.

The study, published in the December issue of The Journal of Pediatrics and funded by a $2.4 million National Institutes of Health grant, challenges the practice of immediate cord clamping, which is still widespread.

“I presented six times (at major conferences) on this topic last spring, and I am still concerned with the number of clinicians who do not put this evidence-based research into their day-to-day practice,” Erickson-Owens said. “In fact, the American College of Obstetrics and Gynecology said in January 2017 that a one-minute delay is enough for healthy babies.

“Our study shows that waiting five minutes or more before clamping the umbilical cord, while infants are held skin-to-skin with the mother, leads to more myelin development,” Erickson-Owens said. “This is a low-tech, low-cost technique that we believe can mitigate iron deficiency and vulnerability to anemia.

“No other studies have been published on the association of the timing of cord clamping with early brain development, specifically myelin volume,” Erickson-Owens said. “What was significantly different was the amount of iron and brain myelin volume in the babies with delayed cord clamping, which was captured by an MRI.”

Myelin is a fatty substance in the brain that wraps around all of the axons of the nerve cells. “It’s an insulator and very important in the transfer of messages across the nerve cells in the brain. It’s assumed that the better the myelination, the more efficient the brain processing is,” said Erickson-Owens, who helped write the American College of Nurse Midwives Statement on Delayed Cord Clamping, and assisted in writing the guidelines on cord clamping for Women & Infants Hospital.

“The regions of the brain affected by increased myelination are those associated with motor, sensory processing/function and visual development. These are all important for early-phase development,” Erickson-Owens said. “The study also obtained information from checkups, blood work for iron indices and neurodevelopmental testing.”

The research project began in October 2012 and enrolled 73 healthy babies. The research team began following the infants at birth. At four months, along with other tests, the babies had an MRI during natural sleep—naps or bedtimes. Their blood was also drawn for iron indices, including ferritin, a blood cell protein containing iron that aids in the formation of myelin. Sixty-five babies remained in the study at four months.

“To get the doctors’ endorsement is very meaningful, especially since they were invited to write this commentary,” Erickson-Owens said.

“Drs. Mercer and Erickson-Owens have made many contributions to our understanding of the beneficial effects of delayed cord clamping on newborn outcomes,” said Dr. James Padbury, chief of pediatrics at Women & Infants Hospital and a member of the study team. “This most recent publication shows that delayed cord clamping increases indices of iron sufficiency that are associated with increased brain myelination. This has important consequences for children born in both industrialized and in developing countries.”